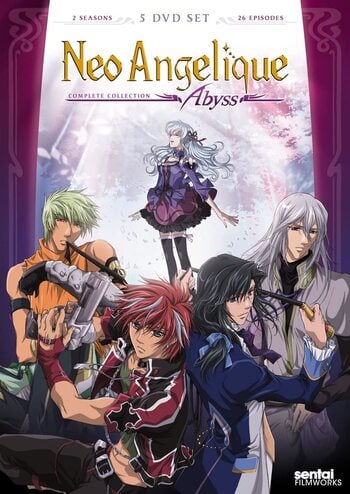 On the face of it, Angelique sounds like an epic fantasy adventure - the heroine finds out that she has an amazing superpower, bands together with a number of talented and powerful men and attempts to repel a vast horde of ugly creatures called Thanatos, hell-bent on destroying the world. Seems pretty standard, I'd say. There's even some interesting political interplay, where a large corporation creates an anti-Thanatos weapon which ironically causes almost as much damage as the beasties they're fighting. That's about the extent of it though.

Unfortunately, Neo Angelique Abyss has a tendency to repeat itself ad infinitum. You'll be sick of the phrase "noblesse oblige" by the time you hit the fifth episode and there are plotholes big enough to drive a steamliner through. There's some effort made into creating a fantasy world, complete with Artifacts - ancient fragments of technology which are actually more advanced than the current technology they're using (a la Final Fantasy), but it's so paper thin that it's hardly worth bothering with. There's a lot of random placenames, a few pointless legends and a whole heap of nameless peasants who offer no purpose other than to offer praise/critique of the heroes' actions.

If you're looking for great action and awe-inspiring dialogue, you won't find it here. Action takes the Bleach approach - if the main cast are losing, someone will show up in the nick of time, or a character will over-exert their powers with no lasting negative effects. Dialogue is trite and plays to all the harem clichés; the number of vaguely romantic scenes between Angelique and her whole host of young handsome men is incalculable.

Let's face it, it's nothing spectacular. Considering this was released only last year, you'd expect something a little more eye-catching that the fight scenes that are offered up.

Having said that, colours are sharp and the character designs are relatively pleasant, if a little bland. Angelique herself is a fairly suitable love-interest as she stands out from the other characters with her blue-grey hair and fashionable goth blouse-skirt combo. The Thanatos, however, look like oversized pokemon.

The less said about the voice actors, the better - though perhaps that's a bit mean as I think any voice would start getting annoying if all it had to say was "Angelique" a few hundred thousand times.

The sound effects are pretty unrealistic, mixed in with a few odd synth choices for musical accompaniment, which strangely works most of the time. Though, for most of the series, the underlying orchestral score overexaggerates every scene it features in and is often cut off disconcertingly and without warning.

The opening theme has gone the same way as recent Bleach openings (which pains me) but the ending theme is fairly pleasant, even though it's horrendously simplistic.

When I watch a series, the types of characters I take notice of most are either original or exciting. Unfortunately, Angelique has very few in either category. The only characters that vaguely injected any interest into the series were the double-act of Rosh and Bernal, and Elenfriet, the rival scientist who pretty much acts like a villain. Even then, however, they're still cardboard cutouts.

While the journalists, Rosh and Bernal, attempt to bring some social commentary to the actions of corporations, they seem too altruistic to be believable. Their constant conversations about "seeking out and printing the truth" is much too simplistic for the situation and loses all impact.

Angelique herself is the usual heroine of these types of series. With an unusually strong conviction and sense of moral justice, she's counterweighted with feelings of inadequacy and powerlessness. However, there's no moral struggle and all powerlessness is overcome within a couple of scenes when it needs to be, making it an almost inconsequential character flaw.

Perhaps I have a heart of stone, but none of the character ellicited even the faintest of sympathies from me, largely because they just didn't seem realistic. They are by and large stereotypical and clichéd; borrowed from much better series that have come before.

It's hard to compare this with recent series as I'm acutely aware that the original concept of Angelique is much older than this series itself. However, it borrows fairly heavily from shows like Sailor Moon (a young schoolgirl with an amazing power fighting creatures from another dimension) and the reverse harem has been around since Ranma 1/2 (and has been done a lot better too - see Ouran).

If you're into bishounen, then you can certainly do a lot worse than this, but it's crystal clear that this only really exists as a title to appeal to little girls who have dreams of becoming princesses and having a lot of really nice guys around to protect them and not take advantage of them. And maybe older girls who like to oggle pretty boys...

If you're not into things like that, then there's really little else for you here.