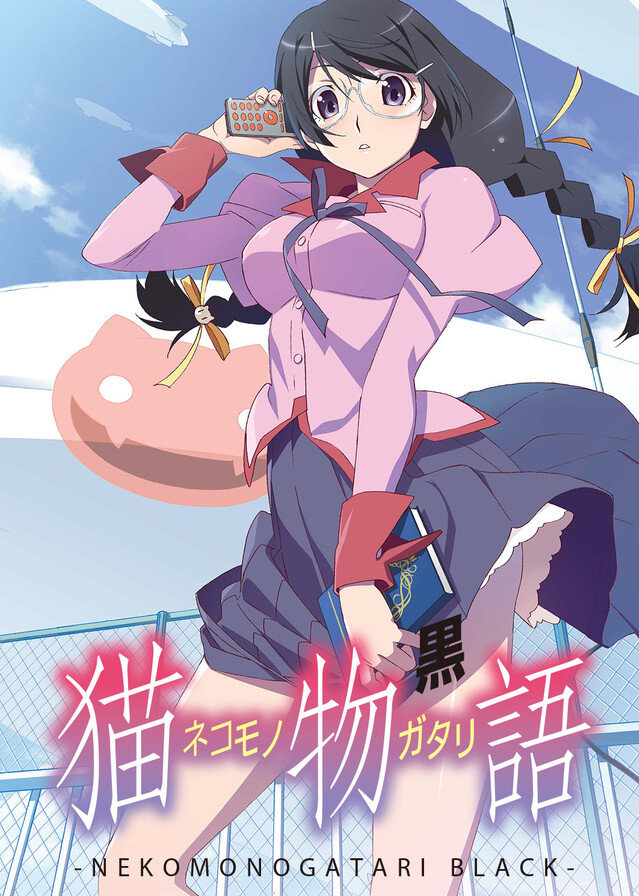 Oh Nekomonogatari why do you piss me off so? But let's get back to the beginning. A few years back, my friend lent me his copy of Bakemonogatari singing all kinds of praise about the series. I have to admit I was kind of curious because it was made by studio Shaft and the main character was voiced by Kamiya Hiroshi who did so well in the Sayonara Zetsubou Sensei series. I've watched the first 2 episodes and though "That was kind of cool, but pointlessly erotic.", but upon reaching the third episode I found myself bored with all the talking. After that I just skimmed through the rest of the episodes and confirmed that there is even more talking and questionable content there, so based on that I decided to drop the series. My anime tastes did change a bit over the time and I decided to give the Bakemonogatari series one more chance, though rather than starting with the first released series, I decided to go for the first series in chronological order that was released, namely Nekomonogatari.

Was it good? I guess it was in a way, because I did enjoy watching the thing, but at the same time the series made me feel annoyed. There are 3 main elements that I found annoying.

First of all are the dialogues. I know that clever dialogues are suppose to be the selling point of the series and the authors try really hard to make them clever, yet they don't feel clever to me. I enjoyed some dialogue driven series before like Spice and Wolf and The Melancholy of Suzumiya Haruhi (though in case of that series it was more about the sarcastic monologues of the male lead), but the dialogues in the Bakemonogatari series don't seem to work (at least for me).

Another annoying element is the animation. I'm not saying it's bad, in fact it's very good, but the pseudo-artistic style cultivated by studio Shaft is starting to get on my nerves. When they introduced it in Sayonara Zetsubou Sensei it was all the rage and it really fit the absurd and style of the series. However as the studio started producing more series, the style, which they felt the urge to incorporate in every single one of them, it simply started getting old. So what is wrong with that, you may ask? Anything and everything can happen on the screen at any given time. Characters may have the most boring conversation ever, but will be shown using bizarre camera angles, boards containing nonsense and non-nonsense text will appear for a fraction of a second and you won't be able to read them unless you pause the playback, drastic changes in animation style happen out of blue etc. Similar effects are also often applied to sound, for instance one of the characters will be filtered to sound low quality for no apparent reason while everyone else will sound normal. After a while it becomes tiresome to watch and distracts you from the supposedly clever dialogues. The worlds shown in Shaft anime can also be tiresome. We have some abstract location existing in an abstract space and there we have the characters talking with one another. The problem is, those locations are very empty, there is not another soul there and it feels very unnatural. It's really annoying if you are familiar with the source material, which most often doesn't resemble this style (though I'm not familiar with the Bakemonogatari source material).

Going backwards, despite coming out a few years later, this is kind of "filler" and goes a bit more into Hanekawa/Meddlecat's story. The first episode is more or less the Araragi family incest based stuff you would have seen in the previous episodes (if you are following the year release order).

Very skippable if you aren't too interested in the meddlecat background. Worth it though if you want to see more Ecchi Neko form. You got an idea of the history to some extent from the first season, so not a huge amount is added, this is mostly an extended version of said that meddlecat scenario. I would consider it more of an Ecchi/fan service chapter above all else.

Most of the cast is absent, and the prime characters you see are the Araragi's, Hanekawa, and some Shinobu/Oshino.

Overall, watched it for completion purposes and it was decent, but you can definitely opt to skip if you aren't into all that into the Ecchi Neko or want to hear more of her story. 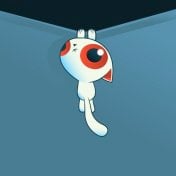 Nekomonogatari, as its name suggest, is a story... about a cat. Very much like the rest of the monogatari series, we find ourselves in a place where the supernatural, simple comedy, beautiful grafics, original story and [delicious] well versed prose, collide in a breathtaking production.

As we are used to in NisiOisin's work, the narrative of the plot is mainly brought to us in conversations and dialogs between the characters; (Don't go away yet!), and the astounding mind of Akiyuki SHINBO brings it to life in an unusual experience. There's action and gore, ecchi and fun, sure, but the true value of this anime is in the mood and the characters; letting yourself be astonished by the visuals; reading between the lines for a message that isn't there; falling in love with the characters and following a story you will never hear anywhere, told as no story has ever been told.

The story centers in Araragi Koyomi, an average highschool student that disregards friendship and love as weaknesses, and goes through life without much interest or aspirations... Oh, and he once met a vampire and became half-vampire himself. (With that simplicity Nekomonogatari presents us the supernatural, and therein lies its beauty.)

After said encounter, Araragi's life changes notably, in particular because he becomes close to a certain classmate that (he believes) saved his life. She's Hanekawa Tsubasa, model student, paragon of virtue, and the shiny new (and only at this point) friend of Araragi.

Nekomonogatari guides us through the discovery of Hanekawa's secrets and feelings; and details the first encounter of Araragi with the 'oddities' of this world (supernatural beings that exist among humans), through a deep exploration of the human nature and feelings. And... yeah, gore and ecchi.

(From here on, I'm assuming you saw Bakemonogatari, because it's crucial to understand the story in this anime)

As you may have heard, Nekomonogatarí is a prequel to Bakemonogatari, detailing the events of the Golden Week (mentioned during Bakemonogatari's last arc) after Kisumonogatari (Koyomi's Vamp). And one may think that after all the flashbacks we got (almost a full episode), we might find us with a mildly developed version of what we already saw... Wrong! Nekomonogatari brings missing links to a story we know how it started and how it ended. The relation between the Araragi siblings is explored a little further, and so is the relation between Koyomi and Oshino. But most importantly, Hanekawa's mind and past.

Nekomonogatari takes very seriously the voice acting, ambient sounds and music. Through out the story we find that the flawless voice acting of each of the characters brings them to life and pulls us into the plot without distraction. The music creates fitting scenes and complement the visuals with exceptional precision.

There's a new opening and closing themes here, that are quite nice, nothing too flashy.

And, on a side note, during the introduction, the closing of the last arc of Bakemonogatari (Supercell's 君の知らない物語) is used with great success to spark our memories and bring us back to Nisioisin universe. I really liked that.

I've been trying to moderate the use of passionate and subjective adjectives to this point, but in this section you'll excuse me...

DEAR ALL MIGHTY LORD! THIS IS (with teh rest of the 'monogatari series) THE MOST BEAUTIFUL THING EVER COME UP FROM HUMAN HANDS!!

The art and animation of this anime is, without doubt, one of the best things that has happened to me, and I'll be forever thankful of being born in this era.

Honestly, if tomorrow an alien mothership or a celestial squad of angels came down from the heavens, informed the world that the purpose of the human kind has been met with this series and that's that, this is the pinnacle mankind and that there would be no more use for us in the universe... I would nod, smile and wholeheartedly agree.

Character development is one of the strongest points of Nisioisin storytelling, where we find ourselves getting engaged in the plot through the discovery of the motivations, past and secrets of the characters.

That said, Nekomonogatari steps out a bit from the usual 'monogatari line and introduce no new characters to the universe. Yep, we have Hanekawa Tsubasa, the Araragi siblings and Oshino. OH, and the cat.

I think that without watching Bakemonogatari and Nisemonogatari the viewer might be overwhelmed by the plot.Nekomonogatari isn't trynig to introduce the characters all over again, which is fine.

The characters develop consistent to themselves and in a way that they became what they are in the following seies.

Bonus Points: There are cameos of certain someone <3

It's no understatement that I'm a big fan of Nisioisin, Shinbo, Bake and Nisemonogatari. Which would suck because I would really have high expectations on anything related. AND they postponed Kisumonogari movie beacuse of Nekomonogatari, which was a letdown back in July.

But I do not lie when I tell you that Nekomonogatari exceded my expectations. It's a truly marvelous work, a worthy prequel and a must watch.

Bakemonogatari has essentially been from the most wonderful and heartwarming environments, as well as one of the foundational kemonomimi places, with Black Hanekawa as one of the greatest kemonomimi from all eternity, from her beautiful and adorable appearance, her stylish and magnificent clothes, her charming and alluring personality, her endearing faith as well as her enchanting abilities make her from the most majestic and venerable kemonomimi, the world building is centered around the main family and their good works that help various people and yokai entities in the residences throughout the land. The beautiful and boundless forests of the world that Black Hanekawa occupies together with the affinity from the spirit world from the afterlife create a calming and wholesome realm which embraces a hopeful aura which illustrates how precious manifestations of the various kemonomimi and their habitations have always been everlasting in the overarching narrative, the luminous presence of Black Hanekawa herself as well as her relationships with the housing companions alongside the other people throughout the villages appears to manifest Bakemonogatari as one the most wonderful and foundational worlds from all eternity.

I feel the art direction tries to go back to what the first season had to offer, it's a little bit more creative and indepth than the second season but not quite a stunning as the first season.

The season is pretty dark and a prequel to season one, highlighting the life of a young student who lives in a large house with her family but who don't consider her to be part of it and also don't want to give her a room to call her own.

She keeps putting on a fake smile and even defends her parents after being slapped around. Due to all the stress, she becomes a cat spirit that 'just wants to have fun'. Koyomi is worried about his friend and tries to help her.

What's interesting is that Koyomi goes through a strugle himself in the season where he's not sure if he loves Hanekawa or not but we know that a day later he falls inlove with Senjogahara after catching her from the staircase scene the season ends on.

The relationship between Shinobu and Koyomi is explained a little bit which is something they don't really touch on in the first season but do explore more in the second season.