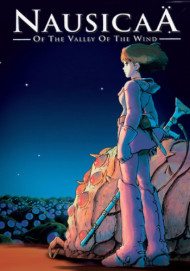 One thousand years after the Giant Warriors caused an apocalyptic event known as the seven days of fire, humans are living in constant fear of the Toxic Jungle. This ever-spreading forest is filled with poisonous plants and gigantic monstrous insects; even the very air is deadly. Nausicaa is the kind and wise princess of a small, peaceful country known as the Valley of the Wind, which has so far avoided the spread of the forest. One night a large airship containing one of the Giant Warriors crashes into the valley. The following day soldiers from the powerful nation of Tolmekia invade the Valley of the Wind to reclaim and revive the warrior. As the only one who truly believes that there is a way for humans to live alongside the insects, Nausicaa must find a way to stop the war that now threatens her people and protect the Toxic Jungle before the Tolmekians burn it to the ground.

The first time I watched this I perceived it as an enjoyable ride, but profoundly inferior to the otherwise excellent Ghibli features. After viewing it again I've changed my opinion rather fundamentally and in this review I'll try to explain why, while trying to maintain a quick and basic approach. Story: 8.5/10 Storywise, Nausicaa combines the environmentalism that was so prominent in Princess Mononoke with a theme of pacifism as we're introduced to a setting 1000 years after civilization was destroyed by Giant Warriors. As toxic gases fill the air and insects have mutated into huge beasts, humanity has succumbed into smaller countries in the few habitable areas. One of these countries is the peaceful valley of the wind, home of Princess Nausicaa. The story is very elaborate with several countries wanting to use the last remaining Giant Warrior for their own purposes. At the core of the warfare that follows the conflict is Nausicaa; a young pacifist who desperately tries to save the rivaling countries from annihilating each other. The narration is a varied mix of lighthearted humor, emotional extravagance and all the other aspects that are required to structure a Ghibli movie. Animation: 8/10 If you're familiar with Ghibli you probably know that you can expect visual splendor even from their older titles. Nausicaa has managed to remain artistically pleasing and presents fluid movement, classical character designs along with frame after frame of memorable creatures and sceneries. The insects in particular are very well animated. Sound: 8/10 Joe Hisaishi didn't quite top the scores he's made for other Ghibli features but the soundtrack in Nausicaa is still impressive. Emotional moments are enhanced almost perfectly with beautiful tunes that go along very well with the solid voice acting.  Characters: 8/10 Several different entities with different motives clash together in a battle of stupidity that's likely to ruin any hope of survival for humanity. An intellectual heroine tries to make them realize their mistakes by offering her life in the name of peace. The extremely loveable Nausicaa reaches the peak of her performance when she approaches a ship that constantly fires at her, while stretching her unarmed hands into the air in a plead for ceased fire. Along with other women like Kino (Kino's Journey) and Oscar (Rose of Versailles) she's the best lead Ghibli has ever dashed out, and her characteristics have been copied into nearly every single other protagonist in their movies ever since; for a good reason it seems. Overall: 8/10 I have no idea why I initially thought of this as inferior to other Ghibli movies. I may not hold it as dear as Spirited Away and Princess Mononoke, but its emotional impact is impossible to deny. When Nausicaa sheds tears for the misunderstood Omhs (insects that, when provoked by humans, go rampage) it's like she sheds tears for humanity itself. Do yourself a favor and watch this!

Story Interesting enough, a little contrived. The story is good, but has the same 'don't make nature mad or it will come get you' idea as a lot of other films and parallels can be drawn with Princess Mononoke.  Animation Very well made. Excellent considering the age of this animated feature. Did a lot to create the signature Ghibli style.  Sound The vocal performance is very good. I particularly enjoy the performances put in by thebig name dub actors. The music fits well and adds to the films atmosphere throughout.  Characters Good characters, go against stereotypes. No character is what you would expect from an animated feature of this age. This is one thing that Hayao Miyazaki does extremely well. You are unsure how each character will act before they are properly introduced. Also since they are not playing out over-used stereotypes, their unpredictability makes them more life like and approachable. Overall Very good, worth a watch. Being the first Ghibli film makes it a must see for any die hard fan, and a good place to start for those who wish to start a collection. 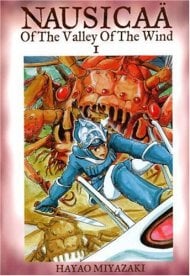