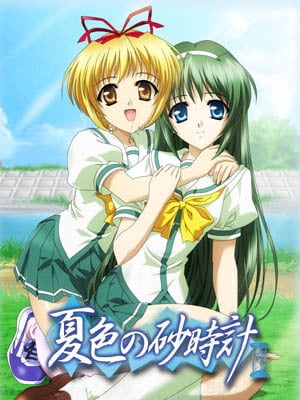 Story
As the synopsis suggests, Natsuiro is a clever mix of romance and sci fi, reminding me quite a bit of an episode of Quantum Leap. Please keep in mind that this isn't just another generic dating-sim transition OVA filled with nothing but romance, because it's not. The sci fi aspects definitely were the most interesting to me, with the romance being second (but also very effective for once).

True, there are some elements that will seem generic, such as the typical love triangle going on between childhood friend and unattainable beauty, but all in all I found the plot to be very original for anime. Indeed, I've never seen an anime where it has this plot, though there have been plenty of real life things such as Quantum Leap which have. That doesn't bother me though, because for anime, this was unique as far as I'm concerned. If you like sci fi and want something interesting, this would be a good bet for sure.
Animation
Visually, Natsuiro was beautiful. Dating-sim elements prevailed sometimes, with characters with giant hair and huge eyes. Backgrounds were gorgeous with rich colors at any time of the day. Interesting effects were used when Koutarou would go back and forth through time, though I don't think they were CG. In general, the overall mood of the animation makes you think it's a romance series (which it is, sort of), but in general, it still had elements of a sci fi feel to it. Great animation all around, nice eye candy.
Sound
The audio is the only thing that I felt failed to some extent, because I don't even remember much of it. The music I remembered tended to be synthy tracks that sounded fitting of a romance series, but could have probably been a bit more edgy for the sci fi fans as well. Voice actors were just fine.
Characters
The characters were all developed nicely, but still seemed a bit shallow. Koutarou was a typical (it seems) anime boy who has a huge crush on someone for no reason, and goes out of their way to show their affection that probably shouldn't be there in the first place. But hey, who am I to argue with cultural differences? He still played it off well. Ai, his childhood friend, played her part well as well, and Ligene stole the show with her kickass sarcasm as the time patroller. In general, the characters helped with the twists of the storyline to make it more realistic and believable. The romance between the characters (besides the initial "why do you both care so much") seemed believable and was compelling along with the plot, but that might just be because I thought the sci fi aspects kicked ass and made it better.
Overall
Natsuiro ended up being a treat, much more than I would have thought. I expected it to be a generic romance series, but it ended up being something much better, and actally was interesting all the way through. If you are looking for a romance series with sci fi elements, look no further! With great animation to go along with it and interesting characters, you have nothing to lose. Plus, it's only 2 episodes! What are you waiting for?

Story: There is a sixth dimension, beyond that which is known to Man. It is a dimension as vast as space, and as timeless as infinity. It is the middleground between awesome and suck, between diamonds and coal; and it lies between the best of B movies, and the worst blockbuster busts. This is the dimension of averageness. It is an area which we call... the Mediocrity Zone.

The only reason I watched this anime is that I played the visual novel (the DVD version, the one everyone says was terrible, but I found to be entertaining). The only reason I bought the visual novel is that the F.Y.E. from which I bought it was having a going out of business sale, so I was able to get it for $8. I had never heard of this series before and heard no critical acclaim about it, but I thoroughly enjoyed the game. One day in summer, I was bored and didn't feel like watching an episode of Hayate the Combat Butler! or Mahou Shoujo Lyrical Nanoha StrikerS, so I fired up this 2 episode OVA, not expecting much.

And I didn't get much. The story is insanely fast paced. I'm not sure if I would have known what was going on if I hadn't played the visual novel before watching the anime. The time traveling was chaotic, and Rikuentai managed to turn a simple, enjoyable, easy to follow plot into an episode of Lost. While at its core, the plot is exciting and interesting, the way it is presented leaves one wondering at the end "what just happened?" That's never a good thing.

Animation: Nothing mind blowing. Seemed rushed, although mostly smooth. Was surprised at the lack of flashbacks and recycled animation. Wasn't an eye sore, but wasn't eye candy either.

Why am I speaking in sentence fragments? The animation seemed like they had more in mind, but time or money ran out before they could achieve their vision. The animators were able to achieve the basic smooth animation we all expect in this digital age, but nothing more. There's little to critique, but nothing to praise.

The voice actors were sufficient. Their performances in the visual novel seemed a tad better though, maybe because they weren't as pressed for time.

Characters: There was no time for character development. All you were able to discern about the characters relied on their anime archetype: Childhood friend, class hottie, sexy teacher with glasses, time traveler, and class athlete. Really, there was very little character development beyond that. The main character is plain and generic (but that's typical of harem animes right?). All of the characters were much deeper in the visual novel, mostly because they each had their own individual arc and time to develop.

And they never explained why Kaho's father was such a jerk!

Overall: There really isn't a definitive reason to watch this anime. There also isn't much that one can complain about considering the length of it. If you want a sampling of what the visual novel is like, or are on a mission to watch every harem anime in existence, than Natsuiro no Sunadokei is for you. If not, you can take this anime off your "Want to Watch" list.

Worth doing some digging

I came upon Natsuiro no Sunadokei as a suggested search on the website for several series of which I had interest, primarily Air. And I was quite pleasantly surprised by this 2 episode OVA. I should say first of all, this was an absolute nightmare to find an online stream but once I finally did... this OVA did not disappoint. I'm gonna draw a few parallels here between Natsuiro and Air just because of the related anime, that's the one I think correlates best that I've watched. Both series implement a non-linear timeline with varying success. This technique I feel is better executed in Natsuiro. It comes in the form of these 'time jumps' that Koutarou, the main character, experiences. This is a quirky little feature that both generates some interest and pushes forward the plot. Another similarity that Natsuiro shares with Air is that the female leads both have this longing-to-fly-free mentality. In Air, this is quite literal; but in Natsuiro, it's a matter of Kaho (the female lead) wanting to live a normal life and escape from the tyranny of her father. Moving on, Natsuiro's story is really quite good. It's a bit fast-paced I suppose, after all this is just a short OVA. And considering that the vibes you get are that of a slow-paced series, I guess this could throw some people off. But the plot is very interesting and frankly not too difficult to follow (in terms of depth), so I didn't really find the pacing to be a big issue. The ending brings a bit of a twist which is commendable considering once again the length of the OVA. The animation design is also quite lovely, very well done. You do a get a connection and a sense for the three most important characters (Koutarou, Kaho, and Ligene) in spite of the length. There isn't much character introduction, but you just go with the flow and things work themselves out quite nicely. Ligene is the time traveler and the reason for Koutarou's 'time jumps'. She's an interesting character because she doesn't appear too much, but has a certain air about her that comes across in the ending. This series really could have done with some better music. There are several scenes that would have been made more profound with something along the lines of a School Days or Air soundtrack. I guess I'll take a sentence or two to make my pitch as to why this would have made a good full length series. First of all, it could have added a lot of drama... certainly would be well-suited. And, with the ending it had... it could certainly have a second season if it were full length. But as it stands, still a very solid stand-alone OVA (which I'm starting to watch more of). I will say the length has hurt my overall impression of this series. While the story and characters were very promising, the lack of development in both these facilities makes it difficult to retain my previous high score for this series. As such, 7.5 out of 10 is what I can give. An enjoyable watch, but not something that really sticks with you.