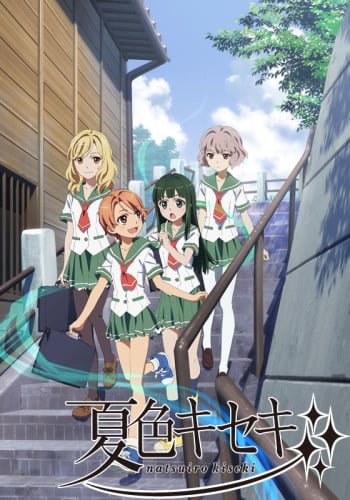 Ill be honest I like this anime. I know this might sound wierd but sometime I like to imagine i'm in the animes I watch. When I imagined I was in this anime I felt like I was sharing both happy and sad times with my friend. When they said goodbye to the miracle they were givin I almost cried. I would definitly recomend this anime.

This anime is for people who like calmer animes, like K-on, Hanayamata, or Love live.
This is about childhood friends, who once dreamed of being idols. As much as youd think this anime would end Cliche, it didnt. For an anime of the genres it was amazing and I suggest it if you need a break from psylogical and sad animes, or action ones. This anime even brought tears to my eyes at some point.
You connect with the characters fast, each character has a twist of personalities.

It isnt just Kuudere, Rinko who could be labeled under that, is also a really happy and caring girl who shows to be passionate and a huge addition to the story.

Usually there's always a main girl I dislike, however with each unique trait the characters were quickly more and more lovable.

The story follows 4 girls, but focuses the most on Natsume, a girl who seemed to be tsundere at first.

Natsuiro Kiseki is about four childhood friends who get involved in a series of strange events (including flying and bodyswitching) after they accidentally wish upon a sacred stone at the local shrine. These events serve as the backdrop to the main conflict, Saki's imminent move to Tokyo, and allow the girls to explore the depths of their friendship while making new memories over summer vacation.

Story: The story is episodic, and is driven by the four characters who each have a very distinct and strong personality. It goes through many typical "summer vacation" events, but also adds in some unusual events due to the power of the sacred stone. Unfortunately, many events in the storyline reminded me of several other stories in other anime. Setting aside the issue of which manga actually came first, there was nothing that was hugely original or groundbreaking.

Animation: The story takes place in a wide variety of settings around the town, as well as venturing to Tokyo on two occasions. There were some really nice backgrounds, but it's that fairly-high-but-standard-quality that you'd expect out of something made in 2012.

Sound: The voice-acting was notably good; each voice actor brought out the personality of their character through their way of talking. The music which the girls use in-story to perform at a singing competition and an audition was well made as well.

Characters: The four characters were all really strongly characterized. They each had their quirks and their role in the group, as well as their own fears to wrestle with throughout the series. They seemed like individuals who truly had bonds with each other, rather than being thrown together just for the sake of the show.

Overall, this is a solid series. It doesn't stand out as particularly stellar, especially considering its resemblance to Kokoro Connect and the Endless Eight arc of Suzumiya Haruhi (2009), BUT it is enjoyable and free from major flaws. It comes off as a cute story about friendship, adds in a taste of the supernatural to keep things interesting, and had characters which I ended up wanting to cheer for.