Naruto Movie 1: Ninja Clash in the Land of Snow - Reviews 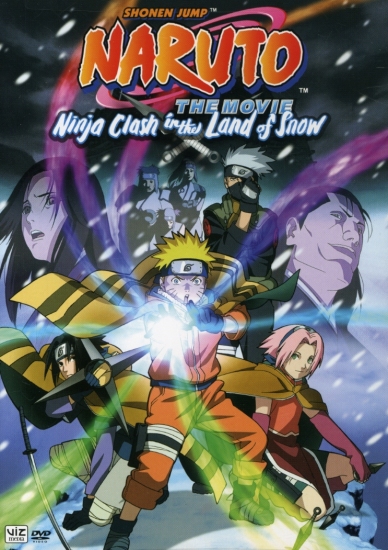 This is the first Naruto movie and still the best of all that were made. It has an atmosphere much closer to that of its earlier episodes, when the show was still fresh and interesting. As far as movies go, you can of course expect far better production values and flashier battles. Yet it has something more than just an excuse for a parade of special attacks. It is by all means nothing more than a filler mission but it had a smart concept that went beyond the simple plot of “Let’s go save some petty village for money”.

The basic plot is about our heroes escorting an actress while she is being part of a film. Along the way, ghosts and a sinister plot come along to spice up the seemingly dull objective. So in a way it is like the first arc of the tv-series, which begins as simply escorting an old guy back home before the whole thing escalates to a nation-wide conflict. The twist of having movie-making in the story is also a nice catch, since not only this way it is an in-joke to the tv series itself getting its own movie for the first time, but also because the actress is in reality pretending to be “just” an actress. These things are very interesting to find in an otherwise short filler mission and it is definitely eons better than those dreadful tv filler arcs.

You don’t need to have watched any of the series to understand what is going on with the plot; it is quite simple and doesn’t delve too much into anyone important character’s past. At least not in a canon way. Supposed Kakashi knows the leader of the enemy ninjas and he is inferior to him or something but you won’t see that guy again so no worries.

Despite the twist with the movie, the overall story is still the typical Naruto fare: Some person is all emo, tragic childhood, greedy adversaries, people fighting in duels, Naruto end the battle with a Rasengan. It could be far more memorable and interesting if more time was invested into getting to know better the princess and the people of Snow Country but as usual you can’t find all that in the duration of a film. Plus, a lot of time is spent on completely irrelevant events called BATTLES! Seriously, this is an action movie and there is a lot of it but because you don’t care much about the characters you end up not caring about the action. And it’s not that exciting compared to the major battles of the main story so you can’t even like it as guilty pleasure too much.

Yukihime is focused upon and fleshed out on a decent level, which I liked a lot, but all the other Snow characters are left completely one-dimensional and are thus boring. This matters a lot when it comes to the enemy ninjas who are less than caricatures. Even as far as the heroes are concerned, only Naruto was actually necessary to the story, as he was there to “melt the ice” from the actresses’ heart. Sasuke, Sakura, and Kakashi were just dragged along just because they are in the same team and the movie needed more people to fill in the fights. Ok, maybe Kakashi’s past mission in the same place has a little to do with it but it is mentioned only in passing and means nothing in overall.

And thus you get a film based on two people who are not given enough time to become memorable for their interaction and lots of cameos that are there just to do some flashy but shallow fighting. It would of course be too much to expect more from a filler movie but in theory it would make it far more enjoyable if there was more interaction and less fighting. Although this is supposed to be aimed at kids who probably only expect to see emo kids fighting so I am not so sure if that would work either with that sort of target audience.

Anyhow, I liked the movie to the most part and disliked how the secondary cast was “just there”. I also loath the ending which had some sort of magic gismo melting the ice, like this is a fairy tale or something. Not bad in overall but far from great and lacks replay value.

I didn't hate it, but it's basically just forgettable filler. I did like the Kakashi fight scenes and the overall message, but as a whole, the movie was just meh. The actress was annoying and the twist bait didn't pan out. The story was ok, but could have just been any one-off filler episodes. The animation was good and the fight scenes were fun to watch. The voice acting and OST music were all good, but I thought the ending song was meh. This movie really only featured team 7 so they were wonderful, but the new characters were stock and forgettable. Overall, if you are a completionist like me, it's an ok watch, but it's nothing too exciting.

Mediocre that is the word I would use to describe this movie.  While it's not terrible it just doesn't do anything to stand out among all the filler from Naruto.  The actress is quite annoying through out the entirety of the film and the fight scenes are sorely lacking.  The final fight especially was dissapointing when each character is defeated in essentially one move.  It does capture the feel of early Naruto episodes which is nice and keeps to some of the early themes but that and the good quality animation are not enough to make this a must see.

The whole thing was just rather, lacking taste. The story took forever to actually take effect and the actress was really annoying. The whole thing just felt like a bloated filler...scratch that it WAS a bloated filler, bereft of purpose and completely uneventful. I guess if there's one redeeming quality is that the animation was up in terms of quality compared to the series which has mediocre to lame animation.

If you're not a fan of the series skip this, if you are you'll probably enjoy it. I know I sure as hell didn't.

Premise: An action film is being made about a princess in danger, and a team that includes Naruto is hired to protect the lead actress during filming.

Required Viewing: Just enough Naruto to know the main cast; through the Zabuza saga would be more than enough.

Quality: This story feels like an average story arc, without any flashbacks or recaps. The plot’s definitely better than any given filler arc or story, but that’s not really saying much.

Action: The fights aren’t intense as much as large. The one with the train sticks out to me as being more difficult than most because of the number of people involved and the size of the battlefield, but some 1 on 1 battles in Naruto are far more gripping.

Perks: There was a plot twist, which was actually pretty good for Naruto. Not earth shaking, but it did make things more complicated.

Overall: It’s a good movie, especially for a spin off from a successful franchise, and unlike the OVAs, it’s actually enjoyable at times! If you’re looking for more Naruto action, this movie’s actually a pretty safe bet.