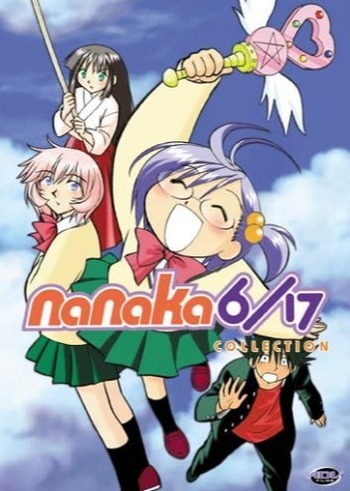 This is a very odd show. Nanaka is a complete bitch as a 17-year-old, and yet as a little kid, she is so troublesome and odd little girl. Nenji is no better, being high strong and easy to get into fights. The story is rather cute even if it’s annoying in some places. At first, I thought it would be a real magical girl show but it seems that I was so wrong. The only thing magical girl about this show is the odd pieces every once in a while when they have a Magical Domiko pieces. I get why they have that breaking the episode, but it doesn’t make it any less annoying.

So I have noticed in most animes (Also in many TV shows, movies, books, ext.), bump on the head results into amnesia and not complete and utter brain damage like real life. It seems there is no such thing as bad things that happen to anime characters. Just once, I want to see someone actually get hurt instead of this amnesia thing.

The animation is lack luster and sometimes even seems haphazard at best. Having said that, it feels more like a child’s show and I guess that makes it alright. The colors and animation have that childish quality that fits with the story. A lot of times we get into the mind space of Nanaka and have these strange thought bubbles that really feel creepy. I’m happy that for the most part, there is not much of a fan service vibe from it even though if there was, it would have one of every style for the fans.

Oh dear god my ears… Nanaka’s 6-year-old voice actor in the American version is so high-pitched that it’s really really hard for me to get into this. And sadly it’s part of the whole story pretty much. She is good with teen Nanaka but really, she should not be doing the little kid. And the Ay yaya thing she does is rather annoying because she does it way to often. You cannot go 5 minutes without her saying that! The voice of Satsuki Arashiyama is bad as well. I cringed a bit at how she sounded like someone who smoked a bit too much. Jinpachi, her brother isn't much better.