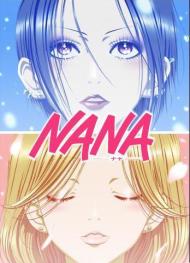 StoryAi Yazawa’s work is so distinctive that no one could mistake Nana as being written by anyone else. While the series isn’t perfect, it can be considered to be one of the frontrunners of modern shoujo romance. I emphasize modern because of how backward and traditional other romance anime seems when compared to Yazawa’s work. While other shoujo series are still mucking about with idealistic conceptions of the One True Love, the feelings of Nana’s characters are much more complex, layered, and believable. Nana is amazing not only for convincing us that its characters love each other, but for convincing us that we know why they love each other. Yazawa’s writing also reflects a fascinating social awareness that speaks of Japan’s changing society. In the radically different protagonists of Komatsu Nana and Osaki Nana, there is an undercurrent of conflict between the Japanese woman’s traditional dependence and burgeoning independence. While Komatsu seems determined, even destined, to become a housewife, Osaki struggles to forge her own path, even at the expense of love and friendship. Surprisingly, the series does not take sides, but is content to show the inherent limitations of both approaches. Unfortunately, as great as Nana’s story is, two factors prevent me from recommending this to everyone. For one, the storyline tends to lean heavily on melodrama, which will no doubt annoy a large portion of potential fans. While a healthy dose of (excellent) comedy prevents the show from ever becoming unbearably angsty, some may have trouble digesting the particularly manipulative plot twists. More damaging is the fact that Nana is currently missing a true ending. Since the Yazawa’s manga is not yet finished, the final episode essentially stops midway through the story. While the producers seem open to a second season (see the “Nana’s House” at the end of episode 47), there is a distinct possibility that there will never be an ending to Nana in anime form. Moreover, even if this series is eventually concluded, fans may have to wait several years for this to actually happen. Still, even with these potential problems, I can’t deny what Nana has managed to achieve: an intelligent, socially aware, and consistently entertaining shoujo romance.AnimationThe visuals here are much less experimental than they were in Paradise Kiss, but the result is still excellent. Yazawa’s character designs are as great as always, the coloring is nice, and character movement feels natural and smooth. There’s also a fair amount of visual humor, which tends to be hilarious.SoundOH BABY HELP ME FROM FROZEN PAIN Say what you will about the Engrish, but Nana’s numerous JRock songs have a certain kick to them that makes them surprisingly listenable, in spite of the pop sensibilities and asinine lyrics. A lot of the time, the show uses a guitar riff of an OP/ED to underscore the more dramatic moments, which works amazingly well at setting a dramatic and somber mood. The rest of the soundtrack is more traditional (it’s mainly simple BGM synth music), but works almost as well. An apt comparison can be drawn to Full Moon wo Sagashite’s music, which managed to use a limited vocal soundtrack to a surprisingly powerful effect.CharactersThe characters of Nana had to be nearly perfect for the show to work, and for the most part, they are. As mentioned earlier, Aizawa writes her characters wonderfully and insightfully, and manages to inject more depth into them than perhaps any other show released this year. Most series are considered good if they can develop one or two characters well; Nana successfully juggles more than seven, and the results are suitably fantastic. That said, there are many that will take issue with Komatsu Nana’s ditzy, impulsive personality. The script essentially requires her to make all the wrong choices at exactly the worst times possible, which will most likely frustrate those that expect anime characters to act rationally. However, Komatsu is nonetheless consistently written throughout the show, and is for the most immensely likeable, in spite of her numerous flaws.OverallAs a whole, Nana is a great work. The only thing that prevents me from scoring this as a “must-see” is the aforementioned lack of a real ending. As hopeful as I am that Nana eventually ends well, experience tells me that a certain amount of pessimism is healthy in these situations. Whatever the case, Nana is a great choice for shoujo fans, even if episode 47 turns out to be the final episode. The soundtrack is great, the storyline is intelligent and riveting, and the character development is easily the best of the year.

I will admit right off the bat that I was never interested in NANA because I do not necessarily consider myself a fan of shojo. Still considered a fairly new anime (2006), it is relatively unheard of unless you are familar with the story's author Ai Yazawa, who also did Paradise Kiss. And yet, after watching it on a whim this last summer, I found myself strangely drawn to its story, its art, and its music. The Story Nana Osaki is a punk rocker from a small coastal town who comes to Tokyo to make a name for herself as a singer in the music scene, greatly influenced by her pseudo ex-boyfriend Ren who now plays for a band named Trapnest. Nana Komatsu (nicknamed Hachi because of her puppy-like characteristics) follows her friends and boyfriend to Tokyo after earning enough money to try and make it on her own and prove her independence. After a chance meeting on a train in which the girls discover they have the same name, the two end up sharing an apartment and becoming very close friends. Their world is filled with sex, music, all night parties, love, and loss as the two women struggle to find a place for themselves. The first half of the anime is focused (with voice-over narration) by Hachi, while the second half centers on Nana's budding music career. Grade: B These characters were hardly born with silver spoons in their mouths and have to struggle for everything they get - it's main theme being "Well, I Guess This Is Growing Up" - but it's similar to a lot of other stories as well; just the names and faces have changed. The Art In accordance with Ai Yazawa's style, NANA is very realistically drawn and nicely streamlined. There are some moments where the characters become cutesy and cartoonish, but these are largely for comedic effect and do well adding to the character development. The music scenes which make up about 40% of the anime are done extremely well - the character's fingers actually move like they're playing the guitar - and the realistic little details of the town add to the setting. Grade: A- The art style is free and flowing, but could take a little bit of getting used to. The Music A splattering of punk rock mixed in with instrumental numbers, the soundtrack makes for some good party music. Considering also that this is an anime that revolves around the music scene in Tokyo, it adds to the story very well, the ending and opening themes (there are five and three respectively) are reflective of the current plotline and are also catchy. Grade: A The message is in the music and it's telling me to go out and take some chances...or go to a club...whatever floats your boat. Overall Grade: B The story never changes, just the names and faces, but despite the running into walls, the whining, the crying, and the general wanting to punch people in the face (which didn't actually happen for me until episode 30 something), it makes you both worry and feel sorry for the girls. It has definite promise as a growing up story and as a testimony to the staying power of freindship, no matter what walk of life you're from. There are also two live action movies that basically follow the same storyline as the anime (with a few minor exceptions) which looked enjoyable. Happy Watching! 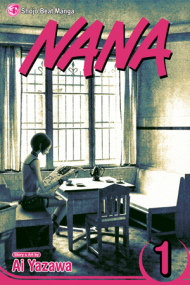