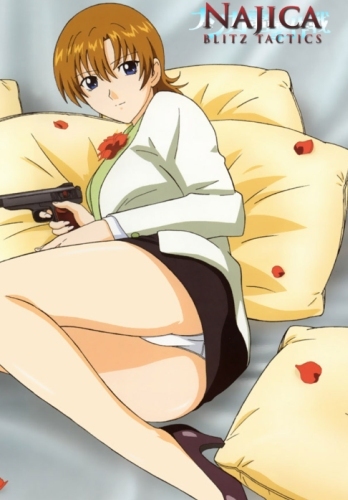 While not the best and not the worst Anime I've seen, Najica just had a story that attempted to go someplace, but didn't.

At the time of watching this Anime I had only one other "Girls with Guns" title to compare it to, and while that is thought to be the best of all time, Noir, I actually found Najica more enjoyable.

While we get a story that runs through the whole series, Najica finding the Humaritts and returning them to Gento, each episode almost plays out the same way.  We also never get deeper into Najica's story and her search for the Sunday scent, sure that wouldn't have made the series riveting but at least it adds a little something extra to what is a very unlikable character.

We also are given a slight glimpse into the creation of all the rogue Humaritts, but it happens far too late to matter.

The writers also put a bit too much into the gratuitous panty shots, there seems to be episodes based solely around how many gun wielding maids can be knocked out with their legs completely up in the air.

The animation on the series is pretty solid.  While theres no innovative style or complex flash animation they do a good job of just drawing a nice cartoon.

I don't remember any vast range of music, which is something I love in an anime, but that which they did use fit nicely and didn't overwhelm any of the scenes.  The English voice overs also weren't terrible (not sure of translation, only going by actual quality of voice actors) and they fit each character very well.

None of the characters really stand out, mainly due to the fact they are developed for about 3 seconds and then thrown into the mix.  We never learn of Najica's background, any past missions, partners or her cover work at CRI Cosmetics.

The Humaritts are given a slight background but for a majority of the episodes we're really up in the air about their creation, why they went missing and Gento's interest in them.

Gento might actually be the best developed character since we know at least one thing about him, he's in love with Najica.  As a character Gento is the most likable, a Lupin like guy who acts pretty zany, despite being the point man and financier of all the recovery missions.

This series just left me a bit flat after the 12 episodes, but thankful it didn't drag on as long as Noir did.  It certainly  will have people who enjoy this series, many just for the panties, but still some for a decent story that won't drive you completely mad to watch.

Now seriously. I love panty shots, but I swear to the heavens above that this anime almost cured me of that love.

It's kind of like how everyone loves chocolate but very few people will be able to stand the sight let alone taste of chocolate after eating 8 lbs of the stuff a day for a week.

This is pretty much a the truth of Najica...too much of a good thing. Realy there is a story but the writers never give you the chance to focus on it much, . I think this anime may have set the record on gratuitous  panty shots. There's almost no point in counting.

No that said, the action when it happens  and the camera isn'tcentered on the panties is decent and the story is actually fairly touching but

A little tip to anime studios. If you're going to do a seres based around panty shots. for for the love of lycra at least vary the colour once in a while. plain white gets very boring after the 20th flash (and really that's about half way through any episode).

Let's be straight here, I'm a guy and I enjoy an occasional ecchi/panty shots anime (though it's not all I watch).  But I cannot reccomend Najica Blitz Tactics.

The show starts a bit slow by introducing the titular character in training (showing what a badass she is) and getting on her first mission.  Fair enough, you have to establish the premise of the show before getting to the heart of the matter...  but over twelve wandering episodes, they never do get to the heart despite showing renewed promise with each one.  The individual episodes pretty much repeat in minature the failures of the series.  They show us a glimpse of the Macguffin, and it's role in the wider world, and then fall back on panty shots, gunplay, and a duex ex machina to get the heroine out of trouble and wrap up the episode.

The characters follow the same arc of spark to thin smoke to ash.  The writers give up glimpses, but never follow up on them and never do more than skim the surface,  I guess that's OK with the heroine and her bosses, but her sidekick *should* be the key to the series... and is given the same treatment.

I watched the show to the end in the hope that they'd do what they kept seeming to be about to do and start gathering the threads together, but I reccomend you skip it entirely.  If you want ecchi/fanservice, watch Girls Bravo which doesn't even pretend to be more than light comedy.  If you want at least a semblance of plot progession to season your fanservice, try Sekirei.

Najica aka Panty Shots: The Animation!

You know you're in trouble when you have a scene with two minions talking.... and the camera stays at CROTCH HEIGHT. Heh. But it's not horribly bad, and is moderately OK story wise.