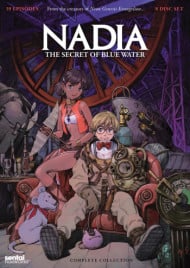 StoryThe story of Nadia takes place in the late 17th century, when planes are just starting to fly and inventions are being discovered every day. Jean is one of these inventors; he's fourteen, and lives in France with his uncle and aunt. Things in his life were fairly normal until Nadia drifted through town. Dark skinned and companions with a lion, Nadia was not only unusual, but was a sight for sore eyes, and Jean was instantly smitten. What he'd soon discover is that a wide variety of bad guys are after Nadia and her pendant known as the Blue Water... and thus the story begins. Nadia and Jean's adventures will take them onto the Nautilus, a submarine piloted by the famed Captain Nemo. They will encounter dangerous enemies and make close friends where they'd least expect it; and most importantly, they will eventually discover the secret of the Blue Water. The big problem with the story is... well... there is no story, not compared to how many episodes there are. It's true that ultimately, there ends up being a very interesting and very deep storyline, but out of the 39 episodes I'd say you could condense all of the "plot" into about 6 episodes total. What's the rest, then? Pure kiddy filler and nothing more. AKA it sucks unless you are six years old. We see random days on the submarine where various characters are learning how to cook or are doing chores. We see countless episodes in the island arc where the characters are dealing with survival skills. In general, this is a series that can only be counted on for one thing: extreme amounts of filler aimed at a child audience. The only problem is, unlike Ghibli movies that are actually enjoyable for older folks, Nadia ends up being boring, repetitive and downright annoying for those of age. AnimationVisually, Nadia looks very outdated. Character designs are very old looking and often times (in the case of the villains) look a little crude and too simplistic. In general the animation definitely seems to shift between decent looking and crude... perhaps because of budget? A great deal of the series takes place underwater in the Nautilus, so we see a lot of the ship in many scenes. The backgrounds seemed to be detailed but never were breathtaking. Overall I’d say very average visuals on pretty much every level. SoundNadia’s music ranged from good (sounding like it came right out of Skies of Arcadia) to bad (very cheesy overused tracks that sound like they came from a Saturday morning cartoon). The Japanese voice acting is fine, though I actually ended up watching the majority of the series dubbed. In most cases dubs are definitely not superior to the subbed version. I’m not sure if I’d call it superior in this case, but it definitely is watchable. The best part is that everyone keeps his or her respective accent. Jean is French and thus, he always has a French accent. CharactersCombine the poor story with the obnoxious antics of Nadia herself and you have a series that becomes almost painful to watch. She’s holier than thou, obnoxious and overall bossy as far as her beliefs go... namely, that she’s a vegetarian. If I have to hear one more bitchy speech about how everyone is a murderer because they are eating meat, I’m going to stab myself. Often times I wanted to reach through the screen and bitch slap Nadia for being so goddamn annoying. "Don’t you care? You murderer! You are destroying helpless animals... don’t you have a soul?! I’d rather starve! WHINE WHINE WHINE WHINE WHINE". You’d need enough cheese to feed a goddamn army with the amount of whine she brings to the table. Poor Jean sees something in her and keeps trying to calm her down whenever possible (as she freaks out all the freaking time), but she keeps being a neurotic baby instead. Ugh. Anyways, Nadia’s antics make even the story episodes irritating, and the filler episodes almost unbearable. The rest of the characters are fine, though the trio of villains look exactly like the bad guys from Pokemon, which doesn’t help matters. Also, Captain Nemo looks an awful lot like Captain Harlock... not sure if that was on purpose. Another "important" part of the series is supposed to be the budding romance between Nadia and Jean, but in my opinion ends up being unconvincing and a little contrived. Maybe it’s the whole fourteen year old love thing that bothers me, but more likely it’s because Nadia is so annoying that I can’t see why anyone would stick around to humor her. I didn’t feel empathetic or warm hearted at all about their situation, not even by the end of the 39 episodes. OverallI don’t know.. in general, Nadia just didn’t end up interesting me. In fact, I felt like I wasted (literally) 20 hours of my life. While the story ULTIMATELY ended up being quite interesting and unique, the sheer number of boring and uninteresting filler episodes ruined any chance of this being on a top 20 list. If you are under the age of 10 or have children, I can see why Nadia might appeal to you. Because hey, I’ll be honest: for children, Nadia is probably a pretty good watch. It’s filled with immature romance, empty side stories and has a baby lion that makes cute noises. But it also lacks depth, feeling, and an overall sense of maturity that would have helped make it likeable. Unless you want a lighthearted filler series, I’d suggest staying away from Nadia. I can’t think of much that made it redeemable enough to waste that much time on, and given a second chance, I wouldn’t watch it again.

When watching the series I expected my rating for story to be lower. It seemed it was mostly filler episodes, with hardly any episodes dedicated to the main plot. It wasn't till later did I realize that the show had a lot less filler than I thought. Those random episodes now seem less random, when you connect the dots. The problem is that all of the important information in one of these episodes can be summed up in a few minutes. They just stretched the story a lot longer than it should have been. That could be bad for some people, but I still enjoyed it. There were still a lot of episodes that were completely filler, and the show didn't need it. They could have cut the show down by fifteen episodes, and would have been the length of a standard series. Looking past those filler and pseudo-filler, how is the story? Damn good. It seemed really original. It provided a really interesting twist on well known stories (i.e. 20,000 Leagues Under the Sea, and Atlantis). Unfortunately the ending was hurt a little by them stretching the show out. They must have realized all of the sudden they were running out of episodes. The ending was rushed, and some characters underdeveloped. Once, it was over I realized... I was sad. The show as over. I took my time on this show. It took up a good few months. Now that I am done with it, it felt like a part of my life has ended. The animation was fine. That's all that I can really say. There was nothing amazing about it, but it wasn't really bad either. Character designs weren't very unique. It was almost like I have seen some of these characters before. Music was also the same as the animation. The series had decent enough music, but I could not remember a single tune. If you were to play a song from the series, I might recognize it. That is a big maybe. The OP is an exception. I did find it to be pretty good. Or maybe I just have a thing for anime themes from the 80s.     Possibly the worst part of the show was the characters. The odd thing is, most of the characters were fine. I did consider cosplaying as Nemo to the next anime convention. The problem is Nadia. I can not believe how much of a jerk she was. Things seemed like they were going to be okay at first. When we meet her, she is unfriendly to Jean. That's because she did not know him, and she did not trust people. Once, started to trust him, she warmed up again. I did not realize her feelings would be all over the place. She would just get mad at every little thing. At one point, Jean saved her life, and she somehow still was able to get angry at him. He did not even do anything wrong. It was her self righteous personality, that made me want to strangle her. Mostly it dealt vegetarianism. She would constantly bring up how evil everyone was because they eat meat. I do not even think the writers understood vegetarians. Nadia was never able able to come up with a good argument in her defense, but everyone else was still evil. Jean brings up the fact that other animals kill, and eat meat. She just brushes him off. Nadia also believes that self defense is wrong, and apparently you should just let someone kill you. Okay... Maybe that last part was really more of a rant. Honestly though, it was the only real problem I had with the show. The other problems, I could deal with. So, I basically did enjoy this show, and I would recommend it. It's just that every now and then a certain character would just start grinding my gears. I mentioned that I was sad that the show was over. It might seem odd with a score of 7.5. To me that would be an average score. The fact is, I don't know what to rate it. I disliked it, yet I liked it. It was annoying, yet awesome. Give it a try. If you don't like it by ten episodes, then it might be safe to say, you possibly won't like the rest. 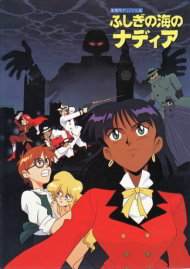 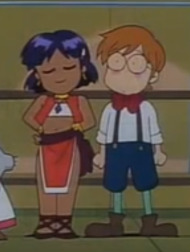