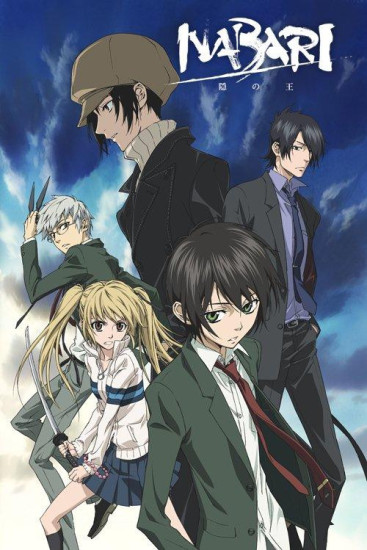 I absolutely love the plot! It's not predictable, it's original, and intriguing! It pulled at my heart strings, and I cried over this. I don't know what else to say about it, other than excellent~!

The animation was great in my opinion. The movements flowed very well, and art was original. Definitely good animation in comparison to others I've seen... o.O

The voice acting was good. I admit, I have very poor judgment when it comes to Japanese voice acting, but I personally loved the voices of the characters~! ^^ As for the opening and ending theme: the opening theme is decent, but nothing memorable, accept when he says "I don't care" in English. o.o For some reason I could get that out of my head. xD The first ending theme, I liked a lot, the second one, gave me a headache for some reason...but I think that's just me. ^^;;

I love the characters! They all had very distinct personalities, and for once none of them annoyed me...even a little! Miharu is very loveable, because although he is very careless at first, you see a much better, adorable, side to him as the series continues. ^^ Yoite was somewhat hard for me to understand, and I wish they would've revealed a bit more of his past, but all in all, I loved Yoite almost as much as Miharu...almost. xD I found Koichi very interesting, Tobari...okay, maybe he annoyed me a tad, but barely. >w< I just don't understand why he was so stubborn. I really liked Raimei, because she almost seemed full of herself in a way. And Fuuma is definitely worth mentioning, because he was definitely a very...interesting character. xD Very humorous in my opinion.

A very very very good anime that I think almost anyone would love! Despite what some people may say, there is no yaoi. Yes, you can think of it as yaoi if you want to, but really, guys can be friends too. I've seen guys hug each other and announce they're in a "Bromance", and even so, they're not homosexual. So really, it isn't yaoi, unless you want it to be. ^^; If that makes sense...just saying, anyways...WATCH IT.

This is a really good anime. I don't usually like ninjas and sword fights and similar stuff, but in this case the anime isn't about ninjas and fighting just for the sake of it, they're elements of the plot that make up the backdrop for the characters to interact, develop and shine. This anime is all about the characters.

The story is good. Maybe the premise is a tad conventional, as in that it's something that we've probably all already seen somewhere else. But then it is developed quite well. To be honest, I guess there are some inconsistencies here and there, though nothing serious that detracts from the overall enjoyment of the anime. If you read the anime synopsis you'll get a pretty good idea of the plot; basically there are opposite ninja factions trying to get control of the ultimate power that would allow them to change the world to their liking. And this ultimate technique that can grant any wish and endows its possessor with a wisdom greater than any simple human being can ever hope to achieve by his own means dwells within a boy called Miharu. So Miharu suddenly finds himself at the centre of a war between ninja clans of whom he had never heard of before that want to get hold of him to use a power he has been told is hidden within him which he wasn't even aware of having.

Sound, animation and drawings are all good.

But it's the characters that will keep you watching the anime and that will stay with you after its end. I saw Nabari for the first time some years ago, and though I had forgotten all about the plot I did remember Yoite, especially the scene at the end where he's sitting knitting a scarf was just unforgettably etched in my mind. There is quite a large cast, and in my opinion nearly all of them are well presented and well developed. They each have distinctive features and personalities that make it impossible to mistake them, as well as understandable motives and plausible reactions. A lot of attention is given to Miharu and Yoite, you see how their relationship develops and changes until they start really caring for one another. Initially Yoite just wants to use Miharu to have his wish granted and Miharu goes along with it because Yoite is blackmailing him. But then they start realising how similar they are, how they hurt in the same way, how they are both alone, and distrustful of others and of life in general. But this attittude of not wanting to be involved because they do not want to get hurt and because at the same time they think they have nothing to give others back, slowly starts to change. I liked Miharu, but I really would have loved to hug Yoite tight and keep him close to lessen a little bit of the pain and loneliness. They're that kind of characters, the kind that you empathise with and find yourself loving, in spite of yourself. Another great character is Tobari sensei, a somewhat idealistic ninja who can't bring himself to kill because he values life so much, and someone whose plans always backfire on him - as Miharu pretentiously points out. I would have liked his good efforts and intentions to be acknowledged, especially by Miharu. Instead it seemed like he was destined to be the emblem of the fact that good intentions are not enough, that you must dirty your hands at some point otherwise you just end up hurting those you so desperately want to protect. Anyway, they're all great characters. Maybe the bad guys leave a bit to be desired. Don't get me wrong, I found myself strongly wishing them to be killed at a certain point and out of the way, although it was a classic example of end not justifying the means. But still, even if you do get to understand why they chose to pursue such a path, they kind of lack complexity and depth.

So, overall, I'd suggest you give it a watch. It's touching and emotional and I think it's well worth watching.

I quite like this anime.  The story -- an Ordinary High School boy finds out he's the key to a great battle between rival ninja clans -- isn't particularly original, but it becomes quickly obvious that the show isn't really about that.  Rather, it's about the slowly evolving relationship between our main character, Miharu, and Yoite, another young man of an opposing ninja clan who is slowly dying -- and desperately wants something from Miharu.

The relationship between these two kindred spirits is fascinating, as we begin to slowly understand how alike their struggles with happiness and apathy are.  How healthy this relationship is, is always in doubt, and trying to come to terms with just how they feel about one another and how this affects both them and the people around them is one of the joys of watching this series.

These two characters are trying to figure things out right along with the viewer, which leads to quite a bit of side-switching and motives and actions that aren't always readily clear.  This is interesting at first, though it does get tiresome after a while; however, it dovetails nicely with the series' message that no one is truly good or bad, or trustworthy, and that you can't rely on others to make your decisions for you.

This also reflects in the moral complexity of the various other characters on the show.  Very few people in this series are all good or all bad; most of them are quite human, and as such are always surprising you.  You come to really care about these people, because they seem so real; and even the ones who are at first unsympathetic or annoying slowly endear themselves to you (though I hated Kotarou right to the end).

The series is at its strongest when it takes advantage of all of the complex characters.  When the series, especially towards the end, focuses more exclusively on the relationship between Miharu and Yoite, it becomes bogged down in a repititious cycle of storylines we've already seen.  Though the relationship between the two is fascinating, it isn't quite fascinating enough to sustain the entire series by itself, which is exactly what it tries to do for a while.  Needles to say, this part is the weakest of the series.

The strongest parts are a raid on a school towards the middle, and the ending, which manages to be completely awesome right up until an unfortunate deus ex machina that leaves the final few episodes to again mostly be about the relationship between Miharu and Yoite.  Still, the ending packs a punch, and is certainly satisfying in the way it manages to tie several different plot threads together.

It would be a shame if I didn't mention the remarkable animation -- the background is, I believe, gorgeous watercolors, and the character designs are dynamic (if a tad unoriginal).  The characters are a little lanky, but still look great, especially when they spring into action.

In short this is a very good series that at times sinks under the weight of its own fantastic characters -- if everyone around Miharu and Yoite wasn't so interesting, we wouldn't notice they're absence; of course, these are some great characters, which means that we do.  By and large, however, this is a great and interesting series, well worth your time.

Nobari no Ou was good. The story was well done. One could draw similarities between this show and others, but that goes for many a series, so I won't say which ones. Nabari no Ou opens up hot, then cools down, warms , and chills. It has a good combination of human drama and folklore, with little dashings of action. The animation is both gritty and light. I could watch this again.

LOVE The anime...yup the plot was great and somewhat unexpected as they kind of live happily ever after. The ending was splendid and indeed heartwarming although i do wish for yeito to survive or at least died having his body remained. ^_^. As for the overall plot i really like how they pull out the logical of having your past and future related..when yeito made the decision to stay as he is it make sense to me because it is true when he says that the past have made him who he is 'the current' he. That by staying the same way as he is he would get the love of those who truly treasured and care for him endlessly. The concept of forgive and forget are somewhat things that we can learn for our living..yup the mosr earnest way of living is to forgive ppl mistake and somehow forget bout it because obviously personal desire and revenge seeking does not do bring anything other than regret and suffer.