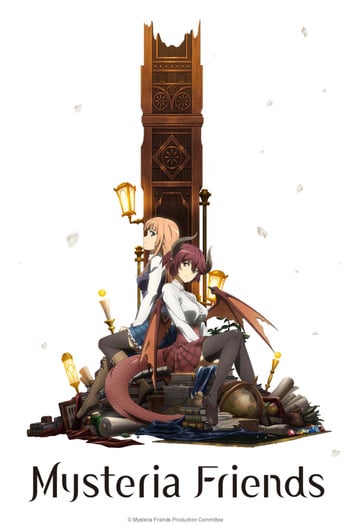 Mysteria Academy is a prestigious magic school that teaches magic without discrimination to the three factions (men, gods, demons), who usually are engaged in battle with each other. Two of the academy's students are Anne, a princess and honor student, and Grea, a princess born from a dragon and a human.

A Slice of Life

Ok so I legit liked this anime I loved the buildings, and how intricate the buildings were. The library is GORGEOUS and I WANT TO GO THEREThis anime made me wish this school existed as it was just so well designed and SO PRETTY!!!Ok so this anime is primarily about two princesses that you follow as they have small "adventures" I think it may be hinted at that they are starting to crush on each other but nothing comes of it and they are just awkwardly cute as a result. I also have ZERO access to the game this is based from. I know its a mobile game, but a quick search in my phone proved I couldnt play it even if I wanted to as it was just not there. Either its cuz I'm android or cuz I'm in US and its only in Japan or something? (I actially own a PS2 game that was only released in 3 countries that I cant play on a US PS2 if that helps with knowing I understand things XD)Anyways onto the grading!Story!Very very cute! Again it the two princesses. And it showed off the world really well, even if it was just the school for the most part. If there is one complaint I have, its that the lore was not explained well enough in the anime itself. The game most likely does this in detail if I had to guess. I'd love to learn more about the library for one! Its both inside and outside, has a hidden area that was banned from student use that seems to have multiple biomes???? And what is that gear clock thing in the middle of the common area? Is that a clock? Then theres the issue of race. There are humans, dragonborn and elves. What about other races? Do they not exist? Why are these the only races shown? How many different kinds are there of each? I also just love to learn about lore from games and shows XD Also the magic, how does it work??? Each race has a different kind but they know next to nothing about each other it feels like. Such as when Grae molted.Positives- The story was easy to follow and it was interesting and fun to watch the two girls relationship blossom. Especially at the end when Grea finally trusts Anne more. Though Anne can be a bit pushy XD  Animation! Superb, I have no real issues, and the flare with the magic was awesome, the detail behind the small scale spells, and especially when Anne uses a massive spell were all just GORGEOUS.  Sound: The music for this anime, omg the music!!! It was "The Ancient Magus' Bride" beautiful for me. Just a kind of music you could listen to for hours and not tire of. The voices were also nice and clear and understandable (even though I dont speak Japanese fluently) Characters:Anne: Princess of the human kingdom, very considerate of others but because she is a "princess" she is not approached by others very often and is usually left alone, hence her being lonely. She makes a few friends who are reoccuring characters, but only one seems to stick with her. Shes also super powerful in magic and doesnt know what restraint is XD She is pushy but not aggressive about it and overall just a lovely girlGrea-Dragonborn princess, I would love more info about her race, especially after her molting episode that was not explained fully. She is quiet, reserved and awkward most of the time. But honestly it works for her. Makes me wonder what her parents are like. Neither girl can live without the other it seems.Owen: Anne's personal bodygaurd. I orginally thought hed be annoying and super protective, you know that trope, but honestly he kind of just lets Anne do what she wants and is there to protect her in case something goes wrong. He also takes his job way too seriously, but hes 17 so what can ya do? As the series progressed I actually found myself looking for him hiding in the corners as it became cuter to see him dote on her. He was not there to be her friend and I think that was made apparent due to his distance when Anne gets lonely. But overall, I liked him!Hanna- Elf girl, student council president. She is flustered easily but knows how to take charge when its needed. She is fun to watch and commands the other students around herself with ease. Overall the anime was overly wholesome and if another anime about these girls was made I would watch it in a heartbeat. Very calming, slice of life, type anime, and again the music was gorgeous to listen to, especially when the girls played piano! If your ok with this kind of anime, I would suggest it!

I’m here to put out my honest review, and my opinions on Mysteria friends. The way it looks is phenomenal and i'm amazed, and super jealous because i could never draw like that, plus to do that 10 times x30 min. But there's 2 main characters Anne and Grea. They both are absolut cute. Anne is an energetic girl that has so much energy that she shines, she's also extremely emotional and when she got sad or mad i felt with her. And so did I do with Grea, but Grea is different she's the quiet calm type. The plot is really weird and I couldn't understand it at first, it seemed random and just showed different parts of their, like kinda slice of life style but then not. But I did learn after watching it that is a backstory of an old game that was alive thru 2012-2016. But there’s a love story involved and that makes me happy, to seem them evolve their friendship into best friend then to clear love state. (still PG tho) -Memmely

It’s easy to love the show because the characters are easy to like. The only downside of it are the way they foretell the story of two princesses. The two are the main character but it’s mostly shown on Princess Anne point of view and not the other one.  Also only Princess Anne is treated as the only Princess when its supposed to be the two of them. Besides aren’t Dragonborn supposed to be powerful, why is Princess Grea treated as a minor character without even the power and strength of a dragon. 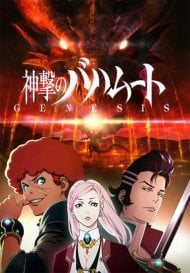 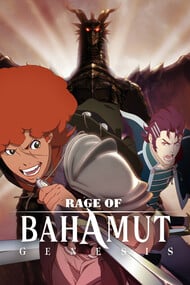 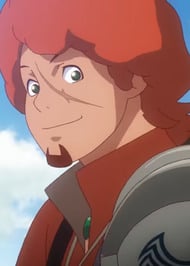 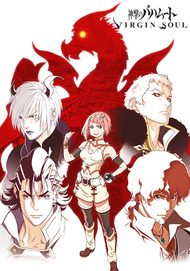 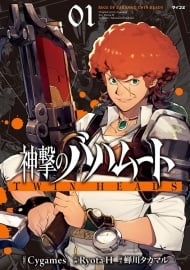 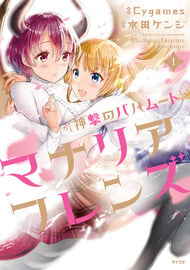