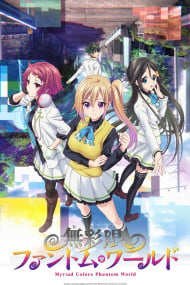 Take Out the Annoying UFO!

I Can't Use My Special Abilities!

Kurumi and the Teddy Bear Kingdom

Break Through the Monkey Hot Spring!

The Strange Tale of the Bakumatsu Phantom

STORY:  4/10 In a non-Post-apocalyptic future, humanity has come to discover creatures known as "phantoms," which are essentially figments of people's imaginations made into reality. They can be monstrous creatures with ill intentions, or simply harmless ones that are looking to fulfill a wish before being sealed away, which is a lot alike crossing over into the afterlife. How do they get sealed? High school students. Huh!? Wait what!? That's right! Pubescent teenagers with special abilities and powers use their gifts to fight and eventually seal them away. At Hosea Academy, they even have a school club known as the Phantom-hunting Club, where the infamously bad team of Haruhiko and Mai fight rigorously to seal away phantoms and to save-face every time they do. It's not until they are joined by the likes of Reina Izumi and Koito Minase that they are able to slowly, but assuredly, become more of a complete team able to eventually take down any phantom that comes their way. Sounds interesting? Well, the concept is just OK, but amusing. It could’ve been executed better than what it was. With the plot being generally light-hearted and simplistic, it’s not hard follow along. Plus, both the action scenes are plentiful enough and the comedic moments are not overly done nor asinine that there is some good, simple fun to be enjoyed; just don’t take the plot too seriously. Lastly, the final arc needs some specific mentioning. Here the direction changes a little and the story becomes its most serious. It doesn’t necessarily feel out of place, but it doesn’t go quite with the pace either. The worst part is that it had potential to be the best part, except that it came too late in the series. It felt rushed and it left it open for a sequel that will likely not happen. ANIMATION:  8/10 The art is the best part of the series. It is very colorful and looks really good in high definition. The animation is smooth and mostly consistent throughout the series. Even the limited CG animation that’s used looks good and blends in with the rest of the series. The only noticeable drawbacks are in the sharp, clean looking, but simple character designs, and the lack of clarity on distance shots. Although not major issues, they do take away from what is an otherwise pleasant looking anime.    SOUND:  7/10 The OP is nothing special but is catchy, especially if you like electronica music. The ED is “meh” except in the last 15 seconds or so when the characters are dancing to the music. That is honestly the only part of both that I remember. As far as during the episodes, the music is fine, and the sound effects are solid. No complaints there. CHARACTERS:  6/10 As with many anime, the characters are a part of several typical tropes (i.e. falling into Mai’s rather Huge Breasts, the occasional panty shot, an episode with bathing suits in it, etc.). It hinders the characters; it’s not overly done to the point where it can become sickening. Because of that they are still likeable, even the young Kurumi, who is without a doubt the “moe” in the show, and Ruru, a fairy-sized phantom who is Scantily-clad, which is apparently OK since she's a phantom and a tiny one at that. Together, they complete the ensemble of this particular team within the Phantom-hunting Club. The various phantoms are often fun and likeable as well. It’s too bad for Enigma that she doesn’t get enough screen time or a chance to showcase her abilities more. Developing her back story with more detail could’ve been a major bonus, as it would have been for all the back stories of the Main cast as well. There are some insights, but not enough in my opinion. OVERALL:  35/50 Amidst its flaws, Myriad Colors Phantom World was actually fun and entertaining, albeit nothing riveting or special. The cast is a little better than average but they suite this anime very well as a team. Finally, if you don’t take it too seriously and let yourself get immersed in the quite often spectacularly colorful visuals, then you are sure to have at least some fun in watching this. ENTERTAINMENT SCORE:  8/10 ACHIEVEMENT SCORE:  +2 to OVERALL My expectations were Moderate, and it delivered Slightly Above those expectations. 2️⃣Weighted Average System Score: (12 + 8 + 7 + 18 + 16 + 2 = 63/100 points) Additional Information: Video Format:  HD Streaming Audio Format:  English dubbed Publisher:  Crunchyroll Equipment Used:  Acer AN515-53-55G9 Nitro 5 Laptop

I am not sure what I am supposed to say about this anime, but for unknown reasons I am watching this. This anime has this strange "Bakemonogatari" feeling, even some music resembles this. The story in a nutshell: Some weird chemical modified the brain of the people, so they would percieve the world in a different way, seeing things dubbed "Phantoms", while children born after the incident developed special abilities. In order to coverup (or rather "set things right" ) the company made a special team of teenagers to catch or "seal" those Phantoms to prevent damage. You wll follow the story of one of the teams and what they have to deal with. Note: The first episode will be a slap in your face, most people stop watching this and complain about "the girl, which grabs it's breasts to do things" HAHAHA, OH WOW. If you had special powers by shooting yourself in the head, you woul... wait, is there an anime about that already? Nah, never, it's too weird. People wouldn't watch it. To sum it up, watch 3 Episodes and make your own decision. Either you will like it or not. However, this series has this wierd vibe to bring you to tears sooner or later, accompanied by nice music. 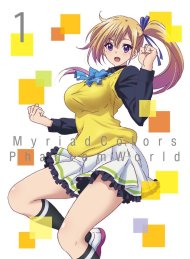 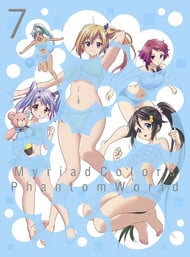 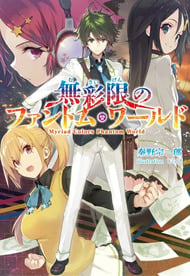