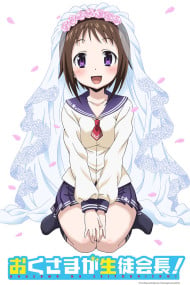 Yo, Mina-sanWelcome to my review of Okusama ga Seitokaichou, which is an 8-minute per episode long, comedy and ecchi-adventure ! (yei!)Note:I Have not yet fully watched this series, but still want to write an early review, which I will edit once I finished watching. Story:The story is as the genres tell you. Something with that many comedy-and ecchi-elements can't be taken seriously. Your casual highschool-romance-drama mixed with kawaii and ecchi jokes and actions. Animation:Pretty straightforward and casualy animated. Nothing outrageous except the censored part. There are is one uncensored and one censored version. The uncensored version is almost an hentai, while the censored version brings you an hilarious and exceptional random cutscene (with stick-figures) of something completly different happening elsewhere. (called "Wife-report") SoundNothing expetional. The music is good and switches early, along with some comedial sound effects. CharactersA variety of characters with your typical sterotypes. Featuring: "the classical clueless-male protagonist", "the I want to be your wife!-schoolgirl" and some others. Which are hilarious. This anime is pretty straightforward: comedy and ecchi. No other parts in-between. There is nothing to be dissapointed about when watching this, because you choosed to watch it. (I'm saying it's your fault for watching something this ecchi ! BAKA )

Okusama ga Seito Kaichou! has a terrible writing, and is a terrible show. This should be stated outright. There's flimsy excuses for nudity and sexual content, and really, all else is thrown out by the wayside. That being said, it has great writing and is a great show, because it's basically all flimsy excuses for nudity and sexual content. My main issues with the subject of sexuality in anime are simple: the characters, whatever their excuse, waffle about and do nothing. They aren't actual teens who despite whatever moralistic lessons taught to them are curious and want to explore the subject. It cripples a show when the loser at school has a harem of beautiful, intelligent, quirky girls throwing themselves at him and he does his best to avoid everything about that. Sure, it's cheap drama making the protagonist indecisive, but it's an insult to the intelligence of everyone involved. Here we don't get that. Sure, they skip right towards the fumbling exploration, and how it often preceeds any real emotional attachment... which can then develop into something deeper. Ironically enough, Okusama ga Seito Kaichou! has more realistic characters than most. And that's in a show that starts out with a girl telling a guy that they're married. Directly bypassing the "will they get together" issue and going right on to the fumbling exploration, marred by morality and expectations, ends up as a triumph in my book. Still, don't let this make you think that there's anything deeper than that in the show. There isn't. That's about all that's interesting here, along with loads of sexual content (yet no actual sex). There are still the contrived misunderstandings that plague the genre. The humor is pretty good though. Okusama ga Seito Kaichou! is lacking in depth and content. But hey, at least they didn't ignore the existence of nipples. Writing (story and characters): Okusama ga Seito Kaichou! has bad writing. And by that, it focuses on one single issue, and while it executes that well, everything else is completely unmemorable. And that single issue could have been explored better, which is a minus. But still it dares tread in places where most shows keep things off screen or keep it for the off screen of an epilogue that will never happen. And technically, it isn't bad. The story is utter garbage from a few perspectives. The premise is silly, yet luckily it gets glossed over with a "just roll with it" attitude that works. It's more a bunch of endless setups than something with an actual plot, and not funny nor shocking enough for that to be a selling point. Still, as far as excuses for the protagonists to fumble around, it is serviceable. Obviously, the point is that the writing is character driven. And the characters aren't that great. They are not explored much beyond their sexual fumblings. Still, that fumbling and a few other moments come off as earnest, which is a huge victory as that is the entire point of the show. Yet even in the little time allotted to the character development, I've seen it handled far better. You can guess what Okusama ga Seito Kaichou! is about, and know most of what the show does by now. Without any spoilers, you could more or less imagine it. And yet, it has one point which is way outside the norm for anime, and doesn't show sexuality as an aesthetic with emotions a sidenote at best, nor as something to be hidden and ignored. It isn't a masterpiece, hell, it isn't good, but it's honest. It doesn't end at a specific point, but that's fine - it isn't like the writing isn't going somewhere that it hasn't already explored. Artwork (animation and sound): Artwork has a purpose, and that's to give the writing some life. And it does that here, pretty damn well even. It isn't going to achieve status as a footnote in the artistic history of anime, but it's actually pretty good. There are issues, of course. But for the goals it needed to achieve, mission accomplished. Nipples exist in Okusama ga Seito Kaichou!. Yeah, one of my greatest pet peeves is the lack of nipples in animation, so this is an immediate point. On the other hand, we have the standard hentai girl grouping, giving us all different bust sizes, heights, hair colors, and builds necessary to give us variety... which is completely unimaginative yet surprisingly fun in the context where the protagonist has already decided on which girl he's with. The color palette is nice and modern, the backgrounds are rather well done, and overall, the visuals are good. Not great, but above average overall. I have no issues with the audio. Actually, the music is rather decent overall, and the voice acting is pretty good. There's nothing to wow you, but it manages to add a vivacious feel to the show, which is a good thing. It isn't that much above average or anything, but it never tries to be. So yeah, I think Okusama ga Seito Kaichou! has good art. It makes the fumblings of the protagonist and his girl (wife?) actually have more depth than the writing should allow them to have, by allowing the characters to emote well. It's not spectacular, but the artwork does its job well, and allows the show to shine as what it wanted to be. Overall: Okusama ga Seito Kaichou! is a surprisingly good show, and by that, I mean it isn't as terrible as I thought it would be. I enjoyed it, despite objectively knowing that it isn't all that good. Also, when the point is fan service, then the fan service doesn't have to be forced... and while at certain points it is anyways, it doesn't have to be. So hey, a mixed bag, but if this sounds like something you'd like, then it's highly recommended. 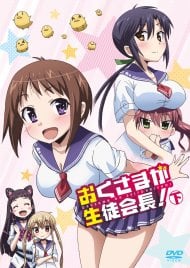 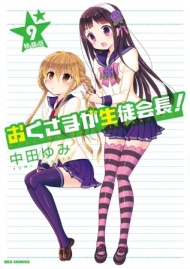 My Wife Is the Student Council President! OVA 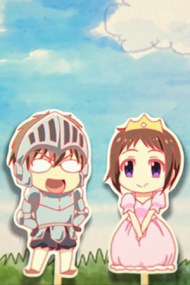 My Wife Is the Student Council President! OVA: Okusama Gekijou 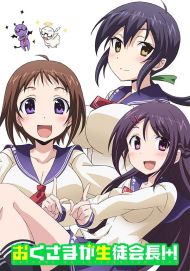 My Wife is the Student Council President+! 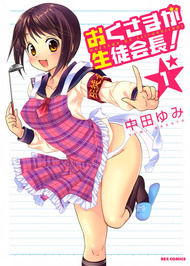