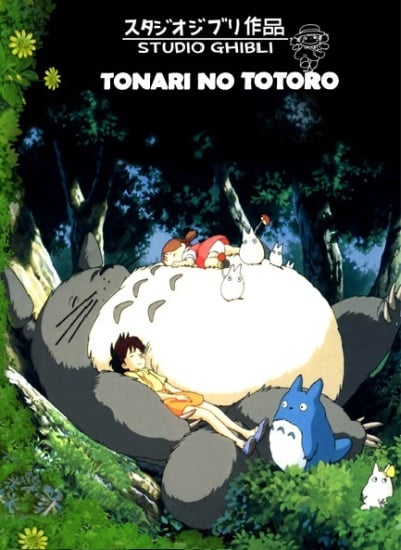 With a director like Miyazaki (Kiki's Delivery Service, Howl's Moving Castle, and Spirited Away) and music by Hisaishi, this movie is sure to make an impression. The characters are imaginative, such as Catbus and Totoro. The story is enjoyable and captivating. And the animation is everything you would expect from Studio Ghibli.

The story follows two young girls, Mei and Satsuki, who have just moved with their father to a little village. It is unclear where they are moving from, but they moved to be closer to the girls' sickly mother. After discovering the mythical realm of Totoro, the girls are introduced to many fantastical creatures. For most of the movie, the girls play with Totoro and their new found friends. However, when their mother becomes catches a cold, Mei embarks to the hospital, becoming lost. Satsuki must rely on the mythical creatures to find her sister and reunite her family.

It is difficult to dislike any of the characters, from the kind Obaasan (Granny in the English adaptation) to adventuresome Mei. However, besides the girls, the characters lack much depth. Since the story focuses on the girls, that is to be expected.

As I said, the music in the film is provided by Hisaishi, the composer behind Spirited Away, Kiki's delivery service, and Princess Mononoke, which are also Miyazaki films. I'm pretty sure the two go together like Danny Elfman and Tim Burton (for those with more Western movie tastes).

Although considered to be one of Studio Ghibli’s best works, I personally found it to be one of their most boring ones. Ok, maybe not as boring as their latest movies, which despite the far better visuals and lots of action are still dull as heck. It’s just that nothing important happens in this film. Ok, maybe it does for the kids but story-wise it is quite unimpressive compared to their earlier works. Nausicaa of the Valley of the Wind (technically not the same studio but from the same people, so it counts) was a grim adventure in a post-apocalyptic world, while Laputa – Castle in the Sky was a zany adventure full of action. It seems like Hayao Miyazaki decided to make an even lighter than Laputa story, which is also why I liked it even less than it.

Let me clarify that there is nothing wrong directing-wise in Totoro and that it is a wonderful film for the family. It’s just that it will feel way too simple in plot and may tire a big part of the target audience for being just about the small, unimportant-to-the-rest-of-the-world adventures of two little girls in a simple rural village, and nothing more. While focusing entirely on its characters it helps to get attached to them a lot easier than being constantly distracted by what is going on in the setting, at the same time it feels like there is nothing serious going on for you to care. Of course if you try to see the story from the eyes of its heroines, then it will definitely feel like it’s the end of the world for them. Their mother is very sick and may never recover, and they go to a place which is considered to be magic and see lots of mystical creatures living there. For the mentality of little kids whose reality is shaken so hard, this will surely mean everything. From a more cynical point of view though, you might as well think that their mother is not even seen in the film so it’s like she doesn’t exist, or that we never find out what happens to her, or that this whole magical world only the girls see is just their imagination going wild and it’s not real at all.

Seeing it from a more introspective angle though, it does have some interesting themes. You could say that it’s showing how two children make-up a whole world, just to find a way to escape their cruel reality. That the whole world of Totoro is their own way of coping with their sadness, as well as how vivid the imagination of kids is to the point it can manifest entire worlds. Heck, you are not even sure if the world is imaginary only towards the end, when Totoro actively aids one of the girls to find her sister. All that make you think funny. And it’s not like their magical world isn’t a fun place, which every animal and object being sentient and moving around. I could even say that their weird facial grimaces are just so bizarre that they become memorable (seriously, what is going on with their eyes and mouths?).

So why wouldn’t I like such a nice premise, if it sounds so imaginative? Basically because I have seen far better similar stories. One movie in particular, titled Heavenly Creatures is almost like the teenage dark version of Totoro and I liked it a lot more for delving much deeper into the twisted minds of the heroines and eventually finding the cruel reality coming back to crush their world. That was such a trip! Heck, the same year Totoro was made, Ghibli also made Grave of the Fireflies, (of which I adored) which is also about two kids suffering because of the cruel reality and eventually being crushed by it as well. So what I am saying here is that Totoro’s magical land is way too detached from reality and plays out as nothing but pure escapism, something of which I don’t like at all. Do I need to remind you of how most modern anime are fan catering crap? Same thing. What about their mother’s fate? What about the police doing something? What changed by the end of the movie if the girls didn’t develop at all and the magical land is left there as a distant backdrop? Too many what are in this film if you don’t see it as JUST a fairy tale.

So, no, I wasn’t thrilled with it as so many others were. The production values are great as always and the magical creatures are adorable in their own spooky way but that’s it. It doesn’t make good use of its setting, other than a fancy presentation.

First off, it's been a really long time since I've written a review on here, and I've never been great with wording, so apologies in advance.


Story: I'm leaving my score for this with a question mark, because I'm not sure whether to rate it a 9.5, or a solid 10. I won't say spoilers, but I was totally captivated throughout the movie, and enjoyed the ending.


Animation: Because I'm a sucker for Studio Ghibli, and because I dig 80's animated films, I think the animation is pretty great. I'm not sure whether to give it an 8.5 or a 9, so for now I'm leaving my score for Animation at "?"


Sound: I really like the music, but the English Dub of the film itself I don't personally care for. I'm not saying it's bad, but if they would've picked a different voice actress for Mei in the English Dub, I think I would've given a higher score for Sound.


Characters: Pretty much adored them all, especially Totoro. Mei I have mixed feelings about though, but in saying that, she's more tolerable to me in the English Sub.


Overall thoughts: A very cute and whimsical film that I'd recommend to those who either are starting their "Studio Ghibli" journies, or are already a fan of Studio Ghibli but haven't watched this yet, or are looking for something to watch with their kids, or are simply looking for something relaxing to watch. This film was recommended to me by a dear friend several years ago, (who also is a Studio Ghibli fan) and I'm glad I listened to her & decided to take a gander at it.

This is by far a favorite at our house! We watch it atleast once a week. the story line is so good and its perfect for all ages.

also just for fun do some digging and read what people think the film is about it makes it all the better!

Ah, I love Totoro! I got the movie for Christmas and I think I've watched it more than once. The story is so cute, the characters are cute, the animation is cute. Agh, everything about this movie is cute.

Studio Ghibli is one of my favorite animation studios since I saw Kiki's Delivery Service when I was litte. Lol, we had it on VHS but it was and still is a great movie. I love Studio Ghibli and I love Totoro. The rain scene is probably one of my favorties. (You'll get it when you watch it)