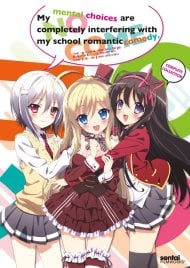 My Mental Choices are Completely Interfering with my School Romantic Comedy or also Noucome for short. Noucome, a little bit ecchi, a little bit harem. An ordinary show but it has a twist.Kanade, the main character, wants to live a normal highschool life but he has a mental condition which forces him to choose between a bad choice or an even worse choice. If he doesnt choose one of the two he will get massive headaches. This mental condition has given him a spot in the 'Reject 5' at school. One day he is given the choice to have a beatifull girl fall out of the sky or have his not so attractive stalker neighbour fall out of the sky. Kanade chooses option 1 and discovers this girl might hold the key to cure his mental condition. The cast reminds me of the 'Melancholy of Haruhi Suzumiya' cast. A bunch of strange outcast who hang out which each other.Kanade = KyonOuka = HaruhiFurano = YukiKonagi = MikuruIt is a funny bunch with Kanade and Furano as my favourites. Kanade with his hilarious condition and Furano as the socially awkward but actually cute girl. My least favourite are Ayame where most of the ecchi content originates from and Utage who is pretty funny but unrealistic and therefor out of place as the loli-sensei. The minor characters, the relaxed God (''Yo, wazzup? God here!'') and the narrator are simply brilliant. I loved how the narrator kept increasing the volume of shouting ''ERABE'' (choose) each time and how he even started laughing during one of the ridiculous choices. The show unfortunally slowly starts to focus more on the love aspect and therefor the amount of choices per episode have declined. But it still is an enjoyable anime. The show has also some great oneliners for memes. ConclusionIt is an ordinary show except for the choices Kanade has to make. These mostly perverted choices might not be everyones taste but I found them hilarious. Because of this twist the show has gotten an above average rating. ERABE!1. Watch this show and laugh till you become a drain clog!2. Watch this show and become so appaled you will eat a porn mag! PSThe OVA was my favourite with the best choices (or worst from Kanades point of view). Also note the School Days ending there. My favourite ''ERABES! / CHOOSE!'' 1. *laugh* Lift her up (Utage-sensei) and say: ''Utage-chan, upsie-daisy!'' *laugh*2. Cling to her and say: ''Yay! Mommy Utage!'' 1. Throw out your ass and say: ''Please stroke it''2. Throw out your ass and say: ''Please lick it'' 1. Make him touch your crotch and say: ''Sup, penis friend?''2. Make him touch your crotch and say: ''Say hello to my Tofu-san.''

This show... I can't remember enjoying an ecchi harem as much as I did with this show, and I don't think I'll ever enjoy another one like I did in this anime. Roll the review! Story ERABE!!: This show revolves around the premise of having to choose between two, equally ridiculous choices, and being punished if you try to ignore them. This condition is known as "Absolute Choice." Our MC-kun, a highschooler, can't ignore Absolute Choice, and whenever he doesn't pick, he's given constant head pain. Most of his choices make him look like either a fool or a pervet. Then one day he was forced to choose a cute girl to fall from the sky, and thus, best girl was introduced. He then gets a call from God himself (no seriously, he does) who tells him that he must complete a series of missions to be rid of Absolute Choice. Every mission is chock full of ridiculous comedy and absolute random stupidity that makes you bust a gut laughing. The missions are pretty simple to follow so next thing you know you'll be thinking of ways for MC-kun to complete his mission. You’ll eventually start to wonder whether or not Kanade can even complete the missions. This becomes a lot whackier when his absolute choice interferes with his plans. He would oftenplan to clear his missions in a certain way, but then his curse will turn on and it’s often related to the mission at hand. When you're forced to touch the girl’s boobs or make her touch yours, completing the mission becomes all the more difficult but also undoubtedly fun. I was hooked on the first episode, and I have no doubts that even the most jaded anime fan will get hooked as well. A 10/10 story... Well, I wish I could say that. So Close Yet...: This show almost did it, it almost had a harem with perfect characters and a good story, but alas, it had to fall prey to the ultimate predator of harem shows: fan service. At the beginning of the series (episodes 1-5~) fanservice was tempered with comedy and good dialogue, but as the series drew closer to it's end, it just churned out more and more fan service. ^Was it necessary? No? BUT BEWBS^ I got the feeling that they had reached a grey area between the intro and the finale where they were worried that their clever story and enjoyable characters wouldn't be enough, so they played it safe and marketed their show towards m'dick. M'dick didn't have any complaints, but my inner critic did. I feel that had the show had tried to insert less fan service, and stuck with more lighthearted ludicry, while still keeping it's intial perversion, then it would have been perfect.  Overall, the beginning of the series was amazing, but the second part really soiled it's chances of a 10/10. Animation Very Good... But: Let it be known that I love this art style, however that doesn't change the fact that it's rather overused and lacks any real flavor that makes it stand out. It could have been better, but it's still pretty to look at and matches the show perfectly, and certainly wasn't a negative aspect of the series.  Sound Headstand Simulator: Probably one of my current favorite openings. Cute girls doing cute things, lack of tasteless panty shots, and a nice song for it (Taiyou to Tsuki no Cross” (太陽と月のCROSS) by TWO-FORMULA (Kaori Sadohara & Saeko Zougou)). Some people find it kind of lackluster, however I feel that it compliments the imagery shown in the OP perfectly.   Setting The Score: Eh? See what I did there? Score? As in the bacround track to the- ah screw it. The score wasn't too impressive by itself, however it matched and drove the scenes forward excellently. I would have made this a 10/10 had the score been a bit more substantial, but with what it had, the sound for this anime was very good and kept me happy.   Characters Ez rlly good: ... is all I can say when I think back on the characters of this show. Each of them had something to offer to the overall plot of the show, however that being said, most of the girls were incredibly one dimensional, pandering to their respective stereotype, but that isn't bad here. Let me explain: the fact that the girls are so one dimmensional serves the overal purpose of a show, because they shine the most when they interact with MC-kun. Almost all of their stereotypes are broken down in his presence, revealing characters that are vulnerable and enamored with the MC-kun, showing and driving forward legitimate romance and development. I think the most important character hidden beneath her shell of stereotypicality is Chacolat. ^-^-^Best Girl^-^-^ Chocolat, not only being the best girl, houses the strongest shell of feelings and emotions. Chacolat is the person who uses silliness and child like innocence to hide a more sensetive side. She'd want to be with a person so bad, but would also secretly be afraid or hurt if he/she rejected her. When the episode came where her true side was shown (not specifying, find it yourselves), that is when I saw her character shine, and I have to commend the show for it, because it was some of the best character writing that a harem anime could possible have. Overall the characters are incredibly weird people, whose ludicry is often the subject of the comedy of the show, especially when God forces MC-kun to do things to rid him of Absolute Choice.    Overall: I love this show. I really do. It had an amazing concept that hooked you from moment #1, characters with a good deal of depth (hidden underneath a specific trope/stereotype), comedy that kept you laughing nearly every episode, and an ending that kept you wanting more, while still being final.  I'm Not Sorry, TheOgrelord

*WILL BE EDITED IN THE FUTURE* *MAY CONTAIN SPOILERS XD* My Mental Choices are Completely Interfering with my School Romantic Comedy or NouCome for short, consists of weirdness, hilarity and original ideas. I understand that the concept of this Anime is a little confusing in it's own way with it's speculations involving the main protagonist but iv'e seen worse. *cough cough, Nichijou, cough cough*.  The main idea around NouCome is about a guy named Amasuka, an average individual but has a dissimilar thing from others, in scenarios, he is granted with limited decisions to go forward with the scenario, for the majority of the choices are humiliating for him but comedy for the other students witnessing this, and then the others are laughing out loud moments for the croud, not to mention that some of the choices he chooses to go with are just pure stupidity or are no-brainers. This dissimilar thing iv'e been talking about is Absolute Choice, a curse upon Amasuka that can only be decimated by following a series of steps in order and in time. i'll be honest here, NouCome is strange but also unique, with it's amusement, the characters having different opinions towards the main protagonist (like always XD), the headache making whilst watching, all of these attributes do have a sole purpose, Characters. The structure around the characters are the average based ones in every harem, ecchi (whatever tags are in this, harem and ecchi should be in there, if they already are :| ). I have said this before In my To Love Ru Review, stating the characters are great and perfect in every way possible, NouCome is currently just below this thought of mine. This has nothing to do with personal thoughts, i'm just say from my perspective on this one; The characters in this and their roles in it have a good combinatio between the two, forming their personalities. 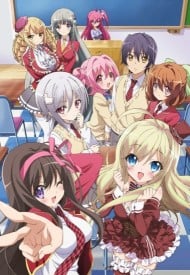 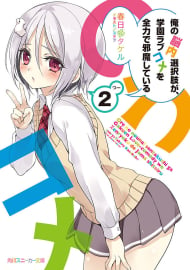 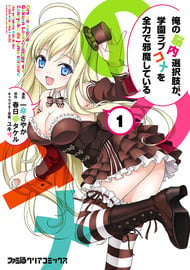 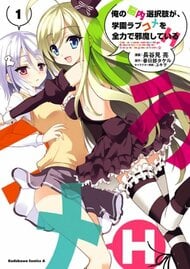