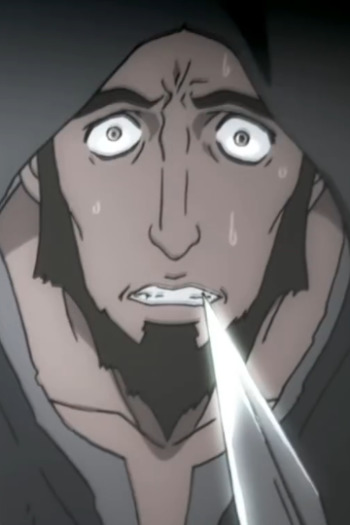 I'm honestly not quite sure what attracted me to this short anime film.  At the time that I watched it, there was no information on A-P for me to go off of so I figured I'd do a quick Google search armed only with my knowledge of the title: My Last Day.  Sounds sentimental, right?  I quickly discovered that this was the "Jesus anime".  Interesting.  Hopefully now you understand why this review is so difficult.

It really doesn't matter which religion you subscribe to, if you subscribe to it at all, because there's nothing preachy about My Last Day.  Clocking in at a little over nine minutes, it doesn't have time to be preachy.  I can guarentee that there weren't any subliminal advertisements for Christianity in this film.  And as such, I'll review this like any work of recorded historical fiction/non-fiction.  Which to say was pretty damn solid.

The story is shot from the perspective of one of the thieves that was crucified alongside Jesus.  And let me tell you, it's gruesome.  This is not the Easter Bunny, happy-go-lucky resurrection Jesus we see.  It's the "they know not what they do" one.  Not for children.

Remember when I said this anime wasn't preachy?  That's still true.  However, there is a message and it really doesn't matter who you are, it's a damned good one.  Forgiveness.  That's something we can all get into and its what makes this incredibly short anime so satisfying and heart-warming.

My Last Day exudes high quality animation.  This isn't like the cartoons they show kids in Sunday school.  A lot of time and care was put into this film, especially in regards to facial expressions.  You can feel how frightened the thief is, how calm Jesus is, and even how hateful the bystanders are.  The animation really hits a home run with the message being pitched.

As with the animation, high quality work is oozed into the sound department as well.  The voice work is surprisingly good for a short film.  Think Genius Party here.  Studio 4C really picks out quality voice actors for their shorts and this one is no exception.  The sound effects are solid as well.  Hearing the blood pour from the nailed-in wounds was especially stomach turning.

We don't really learn much about the two thieves, aside from that the main protagonist stole silver coins.  But Jesus's character was portrayed surprisingly well, and it wasn't even from his p.o.v.  Character development isn't driven through flashbacks but mostly through dialogue and the character's demeanor.  However, the film still requires at least a working knowledge of Jesus's teachings to understand his character.

My Last Day is a solid short film that could appeal to just about any one.  However don't expect to be showing this one to your kids unless you're one of those parents who buys them Grand Theft Auto.  Then they should be okay.  Even if you don't pick up on the message, the story alone is enough to choke you up.  No matter if you view it as a work of fiction or non-fiction, My Last Day is entertaining enough to hold almost any viewer's attention.  And if you like My Last Day be sure to check out the story of Jonah and the Whale.  Spoiler alert: Jonah gets eaten by a whale!

Due to the subject matter of this review, if you have any questions on why I scored what I did, please feel free to comment in the comment section.  I took a lot of time debating my score. Not everything about Jesus has to be perfect you know.  Ever seen Passion of the Christ?  Yeah, I didn't know I was getting into a grindhouse, Texas Chainsaw Massacre-esque flick either.