My Hero Academia: Training of the Dead - Reviews

Alt title: Boku no Hero Academia: Training of the Dead 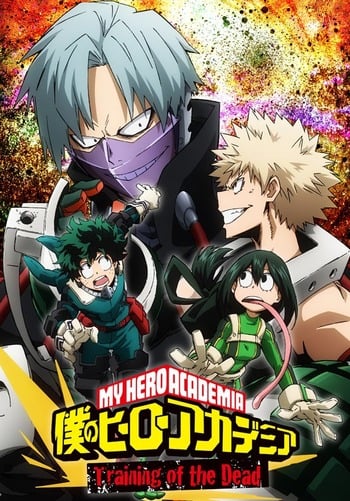 If for some reason you do not watch this OVA episode, it won't really matter at all. It has no attachment to the actual series or films, it is an extra (as Bakugo says). So no pressure in having to watch this, you won't miss anything.

It starts off talking about Asui's friend from her old school and a little insight of her life, but it's really about another school coming to UA and them doing a training exercise together that goes wrong- due to someone's quirk.

Nothing special, the plot is alright if you're bored and want to explore extra bnha stuff. There's nothing really in fault or to complain about so, that's why I gave it an 8. It's not meant to be amazing.

What a way to start a side-story.

All right so this OVA explores more students at U.A. Academy and their quirks... or it’s supposed to. Really it’s about Tsuyu and her friend.

While Deku’s analytical skills and Bakugo’s temper are present, they’re not the focus but neither are any of the other characters or their quirks. Most of the teams have so little screen time that it makes one wonder why the animators bothered including them. There's no real team vs team or class vs class fighting going on.

One student uses their quirk to take-over most of the main characters and they go on a rampage that's over quicker than quick.

The most enjoyable thing to write about this OVA is a spoiler. So I’ll just say it involves a secret possibly getting revealed in a very comedic way.

For an OVA promoted to be about “a joint practice session” involving U.A. Academy heroes in training this was a let down.

There was far too much material jammed into less than 23 minutes.

This would have fared much better as a simple reuniting of friends.

It needed to be a mini-series, several OVA episodes, or an arc in the anime itself. More practice matches between cohorts is a great way to explore a variety of characters and since My Hero Academia is teeming with so many it’s a shame the ensemble fails to get explored the way they deserve.

This OVA does little to further the plot so you can totally skip this and move on to the next episode. But I loved this OVA! In fact, I think this episode was the only one where I actually laughed. Like really really laugh. It's a fun episode. I would definitely recommend watching this.

Like mmeagan said it does give some back story to Froppy(Tsuyu), just like the manga but then it delved even further into a new story line that never appeared in the manga.

Cons: Tsuyu isn't the most interesting of characters' to get some background in.

Only the very beginning of the episode about her parents and siblings are from the manga. Everything else is brand new a very cool quirk(zombie virus) that "acts exactly like in the movies," to quote Deku. Worth a minimum of one watch.