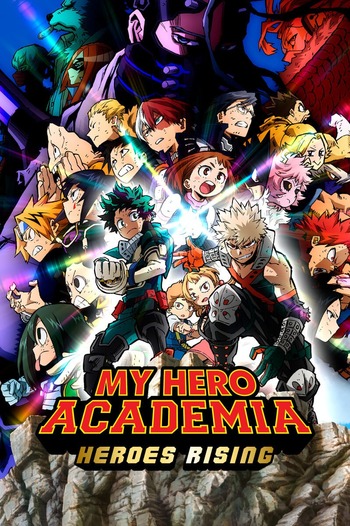 Here’s the movie that murdered the hype for the series, because the studio allocated most of its resources, including the main director, towards making this one, and abandoned the fourth season. As a result, it turned into a badly animated pile of mediocrity that disappointed everybody and made many to lose interest and jump onto the next bandwagon that was Demon Slayer. Because for some reason disposable filler movies with no impact on the show, deserve far better treatment than the canon material, which is what people actually care about. Oh well…

So the plot is very basic crap. The students are sent to a remote island… again. It’s a rehash of the premise of the first movie. And this time, with no supervision by teachers, since that is how high schools work in this dumb universe. You leave dozens of immature, hormone crazy superhumans, completely unchecked for weeks and assume nothing will go wrong.

Then bad guys conveniently appear when the students are still on the island. Can you imagine what would happen if they had waited for the heroes to leave before doing their thing? And can you imagine their plan being to politely ask for where the boy they were looking for is and then politely ask the boy to heal their leader? They would have achieved their mission without having to throw a single punch.

But that way we wouldn’t have a dumb actionfest, so yeah, let’s make everything stupid and shallow. Bad guys attack, good guys counterattack, stuff blow up, and nothing matters because everybody besides Deku and Bakugo are background decorations and the fights have no impact on the plot. Then we get to the meat of the movie, which is the two main characters going up against the big boss of the movie. They can’t beat him with the powers they have, so the writer decides to do some convoluted nonsense and gives Bakugo a power up, which he conveniently forgets about after the battle, so there won’t be any permanent repercussions in the main storyline. Gotta love filler movies.

Anyways, just like the first film you are supposed to watch it just for the dumb battles, which unlike in the main series they don’t end with a couple of punches. Unfortunately, if you follow the series and know that they threw the series under the bus for animating a pretty looking filler, then you won’t even like it as much as the first one.

With the second My Hero Academia full length film, Horikoshi went a different direction than he took in Two Heroes, and went above and beyond to deliver to us an action packed sequel in which every member of class 1-A gets a shining moment.

Story wise we find our class stationed on a small Island off the coast of Japan performing hero work for the month. What should have been exercises in keeping the city city safe and solving minor incidences turns more sinister when the island is descended upon by a small group of villains led by leader, Nine.

Nine's quirk is akin to All for Ones in his ability to steal quirks from others, but the way he utilizes them and his fighting style is totally different from our old villain, teamed with his sidekicks we are awarded plenty of interesting fights and team combinations.

The very end of the movie holds a key momemnt that I am sure has divided some fans. Mainly by the way it is done then almost immediately retconned, but it makes for a pretty epic finale.

The animation is top notch, even higher grade than we expect from the climaxes of MHA's story arcs.

Seeing each member of Class 1-A excel in his or her own way is really the greatest part of the film, and it gives me a feeling of nostalgia, as I've watched all of these characters slowly develop their powers and decision making skills up to this point.

Altogetherm I thought it was a great film, even better than Two Heroes. It leaves out some of the quirky setup we get in most shonen anime films, and dives right into actions. We also get a lot of Bakugou, which is nice because if you are following the anime releases right now, we've only just began to see him about halfway through the 4th season.

This movie made up for the end of season 4, whle season 4 got a bit lackluster in the end, the amount of effort shown in this movie is amazing. The movie was so smooth and fluid the one and a half hours seem to fly, with the story having a gripping start and an amazing climax. The story was well written in which the main villain is one of all for one and the Doc's experiments, and the target was just a normal kid, showing how the variety of different quirks in the world, showing how useful anyone can be, especially in the end when he is inspired to become a hero, which is the main story of mha. The story was also completely different to the trailer, which was an amazing feeling of making it an unpredictable and unique story. The villain is much better than the first movie, but the movie doesnt go in depth about his motives, but it was clear he wanted to steal the quirk of the boy. Of course Deku and Bakugou were the same as they usually are, but bakugou's character development really shined in the island, because he is different from the other heroes. It was heart wrenching seeing Deku transferring his quirk, even if seeing both of them with one for all was amazing. The story is well written, and progresses class 1-A rather than being stagnant and not very useful in the first movie. The ending did feel satisfying and beautiful when i saw nine in the flower field, because in the end, he was just an experiment, and shigaraki is the main villain: There is no room for 2.

The Animation was absolutely spectacular. Every movement felt fluid in mundane scenes, and there was no laziness or carelessness. The animators clearly put a lot of effort in it, and the fight scenes were just as amazing, if not better than the ones we've seen in season 3 and 4. I love it when the music played in the background of the fight scenes and are silent, showing so much emotion without saying a word. The OST is amazing as ever, and made me well up and sent shivers down my spine, as my hero academia does.

Overall, i loved this film, and while others may say it seemed a bit childish, i absolutely loved it despite not being super super invested into anime.

I am quite a fan of the Academia series. I had watched up to three seasons and still need to get caught up with it but this movie is not quite as good as the show. To start with, the movie was a confusing case in that it felt like it was something to be enjoyed as its own but also felt just like a My Hero Academia episode at the end. But still, people who haven't seen the show will still be confused about a few parts and people who have will be left feeling like it could've had more.

To go into deeper detail, the story is the main problem. It still has all the decent characters we've come to know but I just felt like most of the cast's roles were reduced in favor of two new characters who serve more as Eri replacements than their own characters. We don't see Uraraka trying to impress Midoriya, Kaminari being a gentleman to women, Asui making snide remarks, heck even Mineta seemed like he was going to be an interesting character with his toned down pervertedness but he was even sidelined as well. They all pretty much feel like shadows of their former selves as a result of their reduced roles. The heart of the series is this whole cast working together and to throw that out the window for most of the movie in favor of having Deku and Bakugou develop a relationship with these two kids who are nothing more than cute damsel in distresses like a certain white-haired abused child makes the film feel disappointing and stale. As I said, I haven't gotten up to season 4 or read the manga so I can't say for sure if Eri had overshadowed the cast or not. I only know about her based on research.

What's worse is that one of the kids got on my nerves with her mean, snobby attitude at the beginning. And whenever they tried to give these kids depth, I still didn't feel sympathetic to them. The girl's bitterness towards heroes just because feels shallow. I know that they wanted to make her a foil to the boy's more caring nature and it was for character development but they could've at least gave her a reason as to why she hates heroes and/or to find a way to make her stand out other than just being annoying. What really got me concerned is that they are allowed to roam by themselves without any questioning or adults and they look around Eri's age. They even tried to make me feel for these characters by giving a reason for their free-range behaviors by going with the cliched mom death and father being too busy but it didn't work.

The third act, however, makes up for the meh parts of this film. It actually felt like a My Hero Academia episode, they finally got the cast together to fight and it was the most awesome, intense fight I've ever seen out of this franchise. I don't know if the rest of the show is like that but I hope it did have some more moments like that. Oh, and even though Deku and Bakugou's relationship is still annoying to watch, just watch this part of the movie and see what I'm talking about. They did something so heart-warming and touching that I never thought they would do.

Now this may be kind of nitpicky but another problem I had was that I felt that the movie should've just been a long tv movie as it didn't quite feel like a cinematic experience at all but rather a long tv episode.

I would give this movie a 6.5 out of 10 and the .5 is just for that ending. If you are a fan of the series, you might find some enjoyment out of this but don't expect it to be better than the show. Look at it as a standalone and as a standalone, it's a decent film.

Deku and Kacchan working together? Beautiful. Got me crying in the end.

Shigaraki in red??? Got me shook. Shigaraki in a field of flowers? You go boy. Try them new aesthetics. (Btw. How come when he was a wearing gloves that didn't cover all of his finger - his quirk still got activated?)

The way Todoroki defeated that Wolf Boy? Got me crying.

Shouji? As precious as always. Bless him. What a King. Always putting others before himself when the fights get serious. I love him so much.

A little bit slow at first but oh so worth it to see Deku and Kacchan fight side by side.