My Bride is a Mermaid - Recommendations 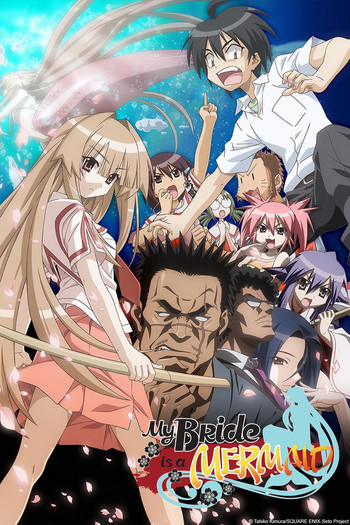 If you're looking for manga similar to My Bride is a Mermaid, you might like these titles.

Follows Yoshino, a mafia boss' granddaughter, whose pedigree has left her without a boyfriend because everyone is terrified of her. Her love life takes a different turn when her grandfather sets her up with the grandson of another mafia boss named Kirishima. Yoshino goes to live with him, but his kind and intelligent demeanor hides a dark side.

Imagine a country where couples are chosen based on the compatibility of their genes. Whenever a resident reaches the age of 14, a partner will be suggested to him or her based on which match would result in the best child being born.

High-school student Kisaragi Maki has one dream: to be a normal wife. She’s part of a Yakuza family known as Group Kisaragi and her father is the third generation of the group - and he wants Maki to be the fourth generation! But Maki isn’t a ‘normal high school student’. She has a split personality which gets her into all sorts of trouble. Can Maki achieve her dream of being a ‘normal wife’?

Yuri, a college student, is saved by Ouya Toshiomi, the young leader of the Ouya group when she’s being forced into consuming illegal drugs at a party. Since then, even though she doesn’t want to get involved with the internal dealings of the Yakuza, she can’t help but fall for Toshiomi’s surprisingly gentle smile. This is the story of two people who are attracted to each other, but the courtship of a man who lives staking his life may be too fierce and crazy…

A JK young mistress x the leader of a yakuza group!? A dangerous love that is unheard of by previous generations!!! The Young mistress Miumi got abducted to the world of the yakuzas!? There, she met the young leader Mikogami…… Unpredictable!! Excitement at its max!! The too dangerous love is beginning—!!