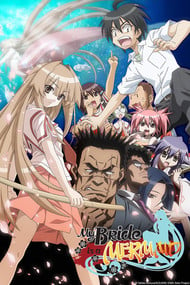 While visiting his hometown, junior high school student Michishio Nagasumi's life was changed forever when he nearly drowned. Though he was saved by a mermaid named San, there’s a catch -- her family is part of a merfolk mafia, and they abide by a strict rule: If a mermaid is discovered by a man, either he or the mermaid must die. That is, unless the man marries into the family! Faced with such a decision, Nagasumi can only oblige their customs and become a "happy" newlywed. Now, with a new school year around the corner, Nagasumi must find a way to deal with his new bride, keep her true nature a secret, and most importantly, escape inevitable death at the hands of San's over-protective father’s gang! 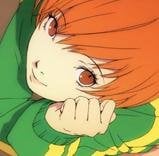 Seto no Hanayome (My Bride is a Mermaid) combines romantic, harem-esque comedy with slapstick, parody, and a bit of action in the mix, pulling off a great presentation of its characters in an extremely humorous yet outstanding fashion. I honestly haven’t laughed this hard in quite a while, and of course, that’s a good thing. I already had some good vibes going into Seto no Hanayome, though in the end, it exceeded my expectations, and has since become one of my favorite anime comedy shows to date. Much of Seto no Hanayome’s entertainment comes from its bizarre cast of characters, but I have to give the plot some credit in giving off a nice first impression, setting things up on what was to come. Nagasumi Michishio is our unlucky protagonist that almost drowns at sea when his family came to visit his grandmother. As he neared his last breath, along came the mermaid San Seto and saved his life. This sweet relief doesn’t last very long, as Nagasumi later finds out that San is a member of a yakuza mermaid family (Wow. Who knew, eh?). One of their laws states that if a mermaid has been exposed to human eyes, then that human or mermaid must be executed to protect the latter’s secret. However, Nagasumi can choose an alternative to save both his and San’s lives: To ask her hand in marriage. Thus, Nagasumi’s hectic life begins. Although it may not seem that way, Seto no Hanayome shares some similarities with School Rumble, ranging from the slew of misunderstandings to both series’ penchants for referencing other shows/films; a couple of noteworthy ones in this show include parodies of Fist of the North Star and James Cameron’s Terminator films. Despite the hilarity being a bit too much in some parts, I’ve come to know and appreciate all the important characters introduced throughout the show. Every single one of them felt like they played significant roles that, for me, it had gotten to the point where I thought it wouldn’t be as compelling without the full cast making appearances in every episode. At its core, Seto no Hanayome is a comedy show, though there’s a bit of backstory with some of the characters that kind of makes you care about them genuinely. That’s one of the things I love about this show; it can be funny or sincere when it has to, and none of that feels archaic or inconsistent. Unfortunately, many of the kind words I have for Seto no Hanayome doesn’t include its visual style. If there’s one thing the show is lacking on, it’s the animation. In some parts, the hectic action/comic scenes are appropriate, but when it comes to the character designs, I’d say it’s pretty lousy. I guess they’re trying to give some animal resemblances to some of the main characters (like for example, the character Saru’s name comes from the Japanese word ‘monkey’ so his face resembles that of a monkey), but I feel their appearances should be more intricately detailed, most notably the hair. Instead of making certain characters stand out in a good way, they just seem out of place compared to the rest. Regardless, Seto no Hanayome still has good production values, so I can’t really complain much. Like I said earlier, the comedic scenes are where they should be, and I was laughing every time characters would be placed in unbelievable situations. A lot of the exaggerated imagery effects give scenes more edge. Compared to other comedy shows, Seto no Hanayome is over-the-top with pretty much everything, and the Japanese voice acting largely contributes to that. I’ve listened to Funimation’s English dub of the series, and I’d say they’ve done a decent job overall. In my honest opinion though, you’d be doing yourself a favor by listening to the Japanese dub, mainly because it makes the experience that much more ridiculous and amusing. I’m not saying that the English dub is bad and should be ignored; it’s just that the original definitely does justice to the show’s comedy/parody tropes. I also think it sounds a lot better than the former. Just saying. Music-wise, there’s nothing that could be really be considered memorable, but the hard rock riffs and the occasional character insert songs perfectly fit the most intense, action-packed scenes of Seto no Hanayome. While the rest of the whimsical tracks aren’t meant to be taken seriously, they still sound pleasing to the ears. I can also echo those sentiments with the OP, ‘Romantic Summer’ (by SUN&LUNA), which is a nice song to listen to, and the first ED song ‘Ashita e no Hikari’ (by Asuka Hinoi), a sweet ballad that reflects the show’s romance elements. There’s not much else to say about Seto no Hanayome at this point, only that it’s an hysterical, incredibly funny series that manages to combine a number of genres together without sacrificing much of its integrity. Although some of the slapstick/parody stuff can probably be a tad bit overwhelming for some, there’s still something to laugh about in each passing episode; something I haven’t done since I first saw School Rumble. If they ever decide to release a second season someday--complete with all of the insanity I’ve been accustomed to in these 26 episodes--count me in. 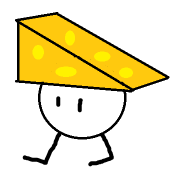 STORY: While the overall story is pretty generic (Harem romantic comedy with a loveable goofyprotagonist, airhead heroine, and tsunderes) the humor in the serie is amazing. Personally, I like the over the top and sudden humor, which this serie has plenty of. The characters often find themselves in random, sudden, and ridiculous situation and they face these situations with equal ridiculousness. ANIMATION: It's a pretty modern anime, so the animation quality is pretty good, but nothing amazing. However, the character's facial expressions, or rather the way they change, contributes greatly to the humor as well. SOUND: The voice actors did a great job bringing forth the humor. In many situations, the comedy comes from the way the actors were able to express the character's ridiculousness. Furthermore, the songs, especially the mermaid song of sleep, fit extremely well with the story. CHARACTERS: All the characters mesh togther very well. Though they each fill a sterotypical role, they are able to work together to bring out the humor.

Nagasumi, the main character, nearly drowns whilst swimming on vactation. He is saved by a mermaid named Son. However Because of mermaid law, once a human discovers a mermaid, the human must choose between marrying the mermaid or letting the mermaid be put to death. After excepting to marry Sun Seto, Nagasumi Will have to get past her father and others.Seto no Hanayome is a really funny comedy type anime, With tons of funny characters, such as chimp, a funny character that is kinda perverted and allways seems to get nagasumi into trouble with girls. Almost every episode is hilariously funny. The harem part of the anime doesn't start till much later on, it never gets really important. The anime its self makes up for having no major story line with its extreamly funny comic values.If you enjoy watching really crazy comedies, then the chances are you'll like Seto no Hanayome, but if you hope to see a fantastic story, you'll be disappointed. It's mainly the Comedy I liked this anime for.Overall I give it a 8.5/10, really worth a watch if your more of a comedy type anime lover. 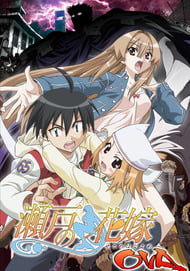 My Bride is a Mermaid Picture Drama 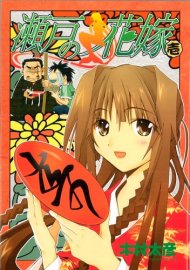