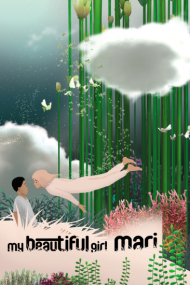 My Beautiful Girl, Mari is a story of two childhood friends, Nam-woo and Jun-ho, who are growing up in a fishing village full of unwanted change. With the discovery of a glowing marble, Nam-woo sometimes finds himself in a lush, dreamlike world, inhabited by a beautiful girl named Mari. With more change inevitable, Nam-woo and Jun-ho struggle to cope with reality, even when tragedy strikes.

StoryThere is a kind of universal appeal to the storyline, which is part slice-of-life and part sheer undiluted fantasy. The two seemingly contradictory elements combine into a heartwarming tale about mismatched romance, dreamy nostalgia, and poignant farewells. For those who have seen Only Yesterday, there are definite similarities between the two plots, and I’m almost certain that those who liked one will like the other. Like Only Yesterday, My Beautiful Girl Mari’s main fault in its narrative is the pacing, which seems to have been set to match the lazy summer afternoons that the film is set in. There is also a fair bit of subtlety here; oftentimes some of the most important points of a particular scene are the ones that go unsaid. I must confess that I didn’t really take to the film until about 20 minutes in, and those with similar attention spans (i.e. that of a hamster on cocaine), will also have trouble getting into the natural rhythm of the film. Still, I eventually warmed to the movie, and by the end liked the overarching story quite a bit.AnimationOne of the best parts about watching animation from countries that are not generally known for it is that the animation will almost always be different from anything that you have seen before. The U.S will always live under the ever-looming shadow of Disney and comic books, while Japan’s style has become almost stubbornly entrenched in the traditional anime/manga look. There is no such creative limitation, however, for countries like France (with their undeniably unique Triplets of Belleville, which sadly will probably never be reviewed by me) or Korea. My Beautiful Girl Mari reflects this completely, with a film that simultaneously sings with both creativity and technical excellence. The look is difficult to describe because there’s basically nothing to compare it to. The edges are more distinct than in traditional anime, but the colors are softer. The best analogy I can think of is that of an animated picture-book. Anyway, the animation works extremely well as a whole. Like the storyline, there is a blend of everyday countryside scenery with completely imaginary fantasy. Overall, the animation handles both parts well, and the transitions between the two worlds never feel forced or artificial. My one complaint is the use of CGI, which does seem a little jarring at times. It’s certainly not as ugly as some of the CGI in other anime, but I’d hesitate to say that it ever actually looks good. Fortunately, the use of it is fairly rare over the course of the movie.SoundThe soundtrack is fine - an interesting instrumental work comprised mainly of guitars and synthesizers. As a whole it works well at fitting the mood of the storyline, although like most movie soundtracks, it probably wouldn’t be very interesting to listen to alone. The voice acting is in Korean, which is a language I’ve heard about twice in my lifetime, and so I couldn’t really judge how good it was.CharactersYou won’t find any wacky personality traits or a buried traumatic past here, but that doesn’t mean the characters aren’t well done. Basically, they feel like normal kids, with realistic problems and personalities. At the end I liked both of the two main male characters. The other supporting characters aren’t really developed, and are mainly there to help develop the plot and support the two protagonists.OverallMy Beautiful Girl Mari is the kind of hidden gem you only find once in a long while – a film that has fallen into obscurity and lies buried among the dreck, just waiting to be mined. In this case, the reasons for this obscurity are almost criminal; had the film been made in Japan, there is no doubt in my mind that it would have received a lot more attention. Instead, the work comes from Korea, and as such is doomed to be ignored by the very people that could appreciate it the most. This is a shame really, as My Beautiful Girl Mari is a great film.