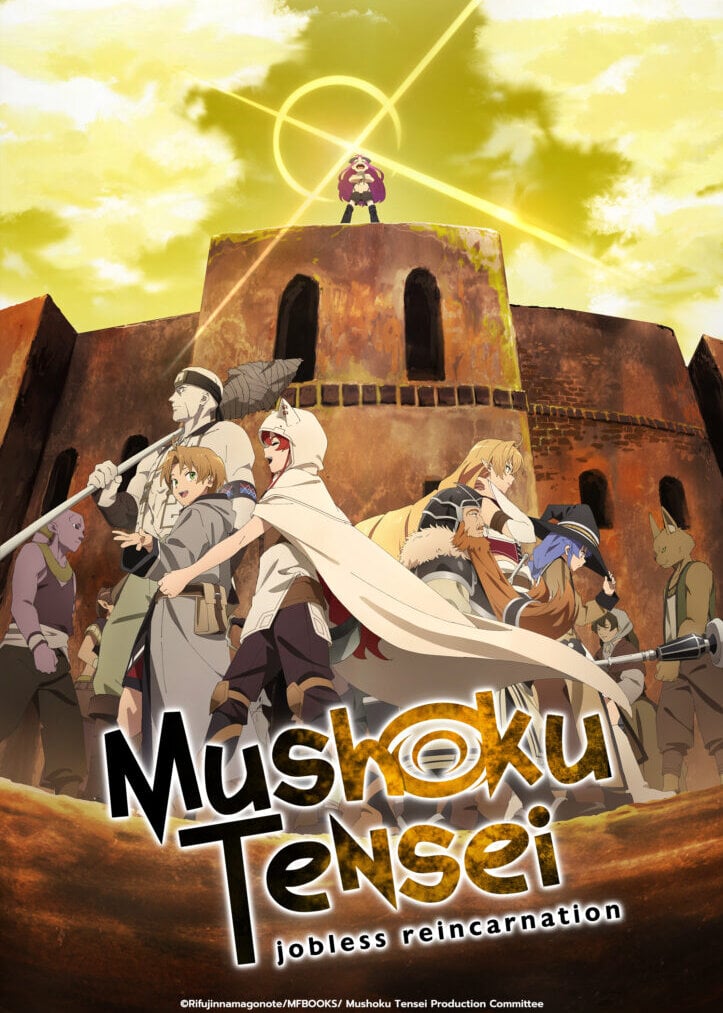 This series is FOR 18+(according to imdb)

IK that the nature of the mc is quite controversial and normally I would have quit a show right away if it promoted pedo stuff and all.

But let's talk about this cour 2 first. When we talk about animations it doesn't get any better than this, one of the best world-building experiences ever, and the world itself is so great, damn I can't get enough about it.

A lot of work has gone into the animation and storytelling (sort of), which you can clearly see.

For the plotline, it has deviated a bit from the MC which is a good thing in itself. More time is given to characters like Ruijerd, Eris, and his dad. it balances it out perfectly.

So let's address the elephant in the room, that's the mc and his pedo tendencies. I think that's it really F**ed up. Many people don't know but in season one when the mc was thrown out of the house while watching p*rn , he was actually watching his nieces on-screen( according to LN readers)

(This show is clearly written by a person who has some very weird fetishes, which are clearly visible throughout the series especially in episodes 9, and bundled in with some unwanted s*x scenes but only with moans)

IDK what the manga shows but the anime has done a lot to reduce these scenes, but yes they do exist, and I'm still bitter about it and how it spoilt such a great show which obviously will get a lot of love and a huge amount of traction but again the negatives will creep in.

Now about the season, its been great so far(8+) the storytelling has been great, they have not rushed the episodes like in many isekai which hope to build hype for the new manga or LN, but not so in this case which shows that they r in it for the long haul and I'm expecting many more episodes to come. The fight scenes have been great, the emotional episodes have also been great.

Now I would have given it 9.5 out of 10 but it pains to see such a great show being spoilt by pedo tendencies so im reducing it to 8.

(Excited for the school arc)

Ciao no hate EVERYONE IS ENTITLED TO THEIR OPINION, JUST DONT FORCE IT ON OTHERS

The first cour of Mushoku Tensei was heavily focused on the coming of age aspect. There weren’t any big bads to fight or need for magical aids to stop them. It was enough to make most overlook the pervy side of the protagonist and to consider it the best isekai of all times. The second cour, however, no longer has that element and comes off more like an adventure, so the need for conveniences and magic nonsense increased tenfold for the sake of the main characters not dying every ten steps they make.

The plot keeps favoring the protagonist for no other reason than him being the protagonist. Major examples include: Mangod constantly telling Rudy what to do instead of letting him choose himself or work things through on his own. Rudy comes off as not having free will because of it. Besides that, demon lolis give him cheap magical power ups without having to train. Bad guys set fire in a forest exactly when Rudy is about to set it on fire, so he won’t actually have to do an evil act. Aristocrats are conveniently revealed to be otakus who help Rudy out without him having to first earn their trust. People appear in front of Rudy exactly when he was talking about them, just so the plot can continue immediately after an infodump. Gods return Rudy to life after they kill him without him doing something for earning his resurrection. It all feels cheap, lazy, and contrived. You never feel there is tension because of the convenient way everything plays out. Not even when the protagonist’s party gets defeated and he is seemingly killed. Why would you think he will stay dead when he had just infodumped a lot of stuff that haven’t happened yet?

Along with all that, the pervy antiques of the protagonist did not go away and in many ways became far worse. He clearly does not want to stop being a pedo and there is no redemption story in sight. There won’t be one either, as confirmed by the author himself. Heck, his own family tells him he hasn’t changed one bit at one point. He is never punished for his behavior and is given no reason to change. And no, light scolding and comical slaps don’t count as punishment. Neither does his imprisonment at the beastmen village, since he was wrongfully accused.

The isekai world he ended up in is sexually objectifying and taking advantage of women at every chance it gets without repercussions for the men. I mean, how can I overlook the fact that a maid got raped by a cheating husband and the outcome had the husband scoring a second wife? Or omitted details, such as the nymphomaniac she-elf who was cursed by men to be like that? Or that the almost naked chick that follows the pedo protagonist’s father is slutting herself so men will continue to treat her like a slut after she got raped by them? And before some smartass points out how it is exactly what was going on in the dark ages, I will remind him that this show is full of powerful female adventurers therefore it gives them privileges whenever it suits its videogame aesthetics.

Mushoku also fails to have compelling villains, since they are all sadistic pedo rapists. In practice they are even sleazier versions of the protagonist, and made to come off as one-dimensionally evil so Rudy will seem better by comparison. They have no redeeming qualities and you just expect him to kick their asses so he will come off as a hero. Without any grey zone, the cast becomes flat and artificial.

I kept the worst for last (and it also happens at the very end). The last episode is the worst in the whole series thus far, by using really dumb excuses for why the UNDERAGE redhead girl wanted to have sex with her 12 YEAR OLD COUSIN. And of course the pedo protagonist did not show his maturity by refusing her moves either. There was absolutely no need for that sex scene to happen other than pleasing the sickos watching this crap. And then, as if throwing insult to injury, the redhead abandons him for the sole purpose of Rudy not having a steady relationship for the rest of the story and thus leaving him free to sleep around with more children. Completely deplorable.

So yeah, whatever good impressions the first cour had left me with (not many) were completely trashed here. I know most in the community love this horrible show, because they see it as escapism fantasy. Who wouldn’t want to molest children without getting punished and getting convenient power ups and magical resurrections with zero repercussions? I don’t watch anime for that, therefore Mushoku Tensei is officially another cancer of modern anime.

This show just continues to impress. After a really strong first season, the second season maintains that really high level of consistency. The thing I love the most about this show is its world building, with character development coming in as a close second. It's a joy to see what kind of approach our heroes might take in dealing with their conflicts, since every conflict is handled in its own unique way. The characters can be extremely goofy, but can be serious when they need to be. Everything in this show has a personality.

We get to see our heroes travel through several continents, all with their own laws and unique look on life. These continents are massive and travelling through them takes time, which results in our heroes learning more about the places that they visit and changing the way they're interacting with people due to the knowledge that they've gained.

However, our adventurers never seem unbeatable or really on top of things, they have their strengths but also still have a lot of weaknesses. Their reputation grows slowly, but it's still not really respected. Rudeus, due to his previous life, will still look at the world in a rather unusual way, which does result in him reacting differently than most of the people born into this world would. Even though our characters are growing, so do their doubts and insecurities.

As wonderful as the show is, a lot of viewers will be put off by the way that Rudeus acts around his second cousin, since his 40-year-old soul has been granted a new body. In return, that same 15-year-old second cousin can't stop herself from wanting to have sex with, in her eyes, a 2-year younger Rudeus. Then we also have the girl that looks like a young teenager, is at least 40 years old, craving a relationship with that same 13-year-old boy with the 40-year-old soul. And we shouldn't forget Sylphiette, who looks and acts 13, but who will age slower than Rudeus and Eris.

That being said though, kids get beaten, killed and sold in this show and most people seem to be fine with that. If we keep digging, I'm sure we'll find plenty more disturbing things that happen in this world. It's the 14th century all over again. Marrying daughters off to gain a slight favour with another duke is something you should expect in a show like this. It doesn't follow the laws and rules we live by, but we also shouldn't forget that this is a fictional fantasy show.

But again, a high quality season and I can't wait to see what's next in store for this amazing show.

This is one of my favorite anime. It's one of those shows that is much more than just the main character.

It goes into depth about trauma, while still telling a compelling and complex story. I am sincerely hoping for a third season.

Well FairPlay to Studio Bind for giving us a second season of this anime and my god a lot of things happened folks that I can’t tell you how much of a good chunk of action packed stories it produced. I just really loved the music like I am so glad they brought Yuiko Oohara back because she is just an amazing singer these past two seasons of the series!

It was really interesting for me as the viewer to see more from Rudy,Rujeird and Eris based on what adventures they are taken to find the family after a sudden event (can’t say not gonna spoil). Although you will eventually see what happens with Eris and Ruijeird’s decision making that made me feel full of emotions that I can’t understand why it happened! (not going to spoil you on that either)

We also get a few interesting characters (The Demon Queen, Elinalise and Viking dude) which I wish appeared more often because I feel they were short on their scenes. I say season 3 will cover all that.

Anyways it’s a pretty decent series of 2021, watch it lads!