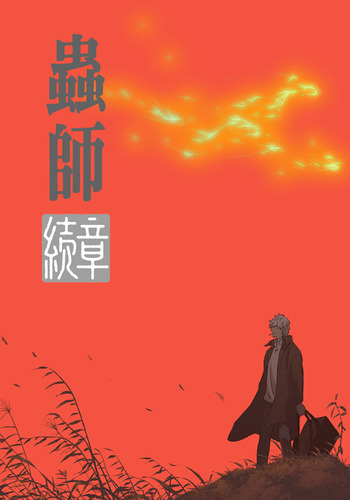 Always loved this show. Very well done, and always has an old world feel. The animation is amazing, and the storyline will blow you away. I literally always fall asleep to this show... every night. It's so calming, and such a beautiful story.

Is the first part of the second season, which was divided into 2x 10 episodes each. Relatively little has changed in terms of content. As before, you follow the various missions of Ginko, in which he is confronted from time to time with new Mushi problems.

And here again the following: The episodes are still not attached. If it weren't for the subdivisions of the seasons, you wouldn't even know that a new season had begun. And so it goes with the stories, only with one difference. The first season had better narratives than this one. Here, half of the stories had hardly any excitement or interest. They were practically empty in content, especially the last episode of this season was already an insult in my eyes. Content of about 8 minutes was dragged to 10 minutes in the most horrible ways, making this 20 minutes feel longer than both 40 minutes of Ova combined.

Well, again, nice visuals of the environments and a nice detail to the Mushi. I like the gentle and quiet nature of the narration or over-the-top action. If only the pacing wasn't so slow, the anime would come across much better.

There is nothing new worth mentioning in the character department. Ginko is still Ginko and you see relatively little of him outside of his profession. As a result, his reactions are practically the same every episode. He comes in, hears a story, says what's going on, and finds a solution. He's likable, but in the long run, you could almost skip his dialogue because it's practically the same every episode. Only rarely does he interact more deeply with characters. Mostly he just talks about his knowledge and healing methods. This is of course logical given the situation. However, experiencing the same procedure every time is enormously exhausting.

Among other things, this season of Mushishi had one of the worst intros I have ever seen. Musically not worth mentioning and visually very weak. Completely inappropriate for this work.

Of all the seasons of Mushishi, this one is undoubtedly the weakest. The second part of this season had more quality and more creative stories than this one.

Nevertheless, this season is enjoyable if you're looking for something simple to watch in between.