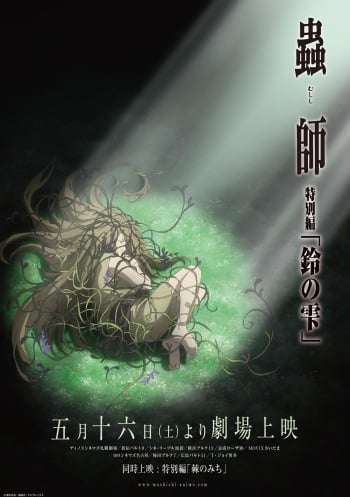 After a 9-year run, our tour with Ginko through the supernatural draws to a close with a short film adaptation of Suzu no Shizuku (Drops of Bells), the last arc of the acclaimed young adult manga—Mushishi—by Yuki Urushibara.

In the first half of Suzu no Shizuku, a girl leaves her family behind when she’s summoned to be the next lord of a mountain. Thriving lands, called “Rivers of Light”, require the presence of a lord to maintain the balance of life in that area. Choosing a human as a lord is an unusual move, however. Such a task is typically delegated to animals since they live with fewer emotional attachments.

Several of the introspective themes that were previously explored in the Mushishi world are summarized here—most notably interconnectedness, the indifference of nature, and the necessity of letting go. All life—plants, animals, and humans—are dependent on each other, and are influenced by the ripples of cause and effect. Nature, which is personified in Suzu no Shizuku as the mountain lord, acts as the unbiased mediator. The overarching lesson seems to be that we should appreciate what we have, and not cling when the time comes to move on.

The second half concludes the story without quite concluding the series. The ending leaves some questions unanswered, but it ties up enough to guide your imagination to where the stories and characters could progress into the distant future. I'll refrain from deconstructing this any further. To me, Mushishi is more of a meditation than a conventional story, and is therefore best appreciated without excessive analysis.

The art, animation, and sound design have remained remarkably consistent over the years. The backgrounds in Suzu no Shizuku are just as gorgeous as they were when the first season aired in 2005. The character and special effects animation are fluid and precise. And the subdued and ambient melodies that have become a hallmark of this series are present as well.

When you think about it, it’s kind of a miracle that Mushishi, which is essentially about life experiences and nature, was made with such a substantial budget in today's hungry and impatient climate. I’m grateful that ArtLand was willing to take a chance on such an esoteric and spiritual story, and that it’s been successful enough to adapt in its entirety. It’s been a truly extraordinary experience.

I still had some hope for a "creative" conclusion or at least a good adaptation, but I didn't find any.

As before, the movie is standalone and has no connection to the anime. It is simply another story like in the anime. Only with the difference that it has been very unspectacular compared to some episodes of the series. In terms of content, it has little to show. Even though I liked that for once here was shown more of the characters and how they have suffered in their lives. And how much effect, the paranormal world had on their lives.

However, this should have been another Ova and not a "Movie", can not understand this designation for this, especially since the Hihamukage Ova has been better content and more exciting.

In terms of animation, there was nothing to add here, it was immensely detailed even if once again the atmosphere was lacking. The quality was comparable to the series and no great changes.

And here ended also the plot around the Mushishi - Ginko. It was mostly a reasonably interesting narrative with its strengths and weaknesses. Maybe one day I'll read the manga to get a better comparison. As an anime adaptation, this one didn't overwhelm me. In the realm of creativity and plot, it remained only satisfactory. There was too much-lacking detail regarding the world. Yes, the Mushi were given a very interesting concept and a lot of love was put into the detail. But also only in this there. The whole human world was only half-heartedly built up without a concept. Until the end, I couldn't even tell why Ginko dressed like a 19th century Englishman, why there were no criminals in Japan, let alone lawmen. It felt like a big sandbox with various quests spawned in. In terms of characters, I would have liked to have seen and experienced far more of Ginko. Likewise, more interactions with people he's known longer, as this exposed more of his real personality that had nothing to do with his work. Unfortunately, the doctor was only seen 4-5 times in the whole anime and he only met with the other woman twice.

Mushishi has indeed been a very diverse Show and I can understand why so many like it, I like it as well. But otherwise, too much potential was wasted here. Nevertheless, it was a noteworthy experience and an extension for me.

This is the last stop on the MUSHI-SHI train and I'm assuming if you made it this far then you don't need my convincing to watch this. So I will be brief. Obviously read the shows description if you Want a summary but I'll give you the non spoiler details that the description doesn't.

It is certainly more of the same without a dip in quality which is great. Animation, sound and music all are just as amazing as the first episode. So go ahead and watch but don't go in with super high expectations, it is technically only a 2 episode arc into one so I guess a movie. reviews done so enjoy the movie and the last part of mushi shi

boom I'm back like a marvels end credit sequence. (No spoilers btw) I honestly was overhyped, my brother told me that it was his favorite of the series which had me hyped. Especially since I had just come off the last half of the second season and the last 10 episodes really are some of the best anime you can come across, so I was expecting something big. Well I watched the movie a few days after I finished the series and i was a little disappointed but that is what I get for expecting to much. To put it plainly this was just another epsiode and some you will love some you will be bored and others you'll be meh on it so if you read this then keep that in mind, but if you have already watched then I'm curious to see what others though this episode reminded me more the first season but it was still good, I just wish there was a bit more