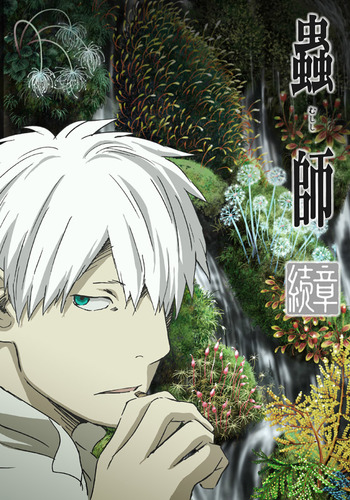 Mushishi Zoku Shou 2 is an episodic series based around Ginko a Mushi Master who must travel the country helping those being affected my Mushi, which are ubiquitous creatures with supernatural powers, but are primitive and ancient. Most humans are unable to see them, but some can be affected in a variety of ways.

In this season we catch a glimpse into Gink's past, see why he wears his hair in front of one of his eyes, why he must keep on the move and how he learnt his skills.

The beauty of this series is the slow paced nature of the story telling and how the feelings of the characters creates the story.

There is good reason why this series remains in the top ten of manga.

Without doubt one of the most beautifully created animes ever made. The attention to detail is everywhere, I can only imagine how long it took create the scenes. In contrast the characters are very basic, made to look ordinary, and I think that this is a huge part of it's charm.

The opening song by Lucy Rose (http://en.wikipedia.org/wiki/Lucy_Rose)  is beautiful, her haunting voice is the perfect introduction to each episode. Again the attention to detail in the sounds of nature are impressive as well as realistic. The voice actors are understated, and I have yet to be irritated by squeeky female actors, which is a personal pet peev.

This is an episodic series, the only re-occuring character is Ginko, and actually until this season, we learn very little about him. That said, that really doesn't matter, each episode is a perfect story within itself. Ginko's character infact is meant to be unassuming, and the characters of each episode take centre stage, without once being over bearing.

As you can tell I am a huge fan of this show and I was delighted when a new season was announced. Is is not high drama, fast paced, loved up anime. It is Japanese story telling at its best. Enjoy!

I've watched all of the seasons of this show, and I've never seen an Anime that flows so well. I literally fall asleep to this show every night. It not only has amazing cinematography, but the storyline is enticing. It's a show that you don't expect action, but you expect beauty. It's seriously one of the most beautiful things I've ever seen. I compare it to Miyazaki. Beautiful, yet slow running. It's played episode by episode (for the most part) and completely worth your time.

Of all the episodes and all the seasons, this is the best in my opinion.

The anime is still episodic and has no main plot until the bitter end. But this season finally presented several short stories with much more background, depth, and individuality than in previous seasons. Here, most episodes also had a stronger atmosphere and faster pacing.

Other than that, there's nothing more to say about this. There was another episode about Ginko's past, even if it didn't add much, you still saw an unexpected event from the past.

Regarding the characters, there were slight changes here, integrating them more into the individual Mushi situations. They were less just bystanders, but more in the focus of the situation. Whereas in many past episodes, they didn't contribute anything to the case anyway except for their fear and doubt and just stood there like NPCs waiting for Ginko to work. Here they felt more human than ever.

To my surprise, an improvement in things and I wish it had been like this from the beginning. In season 1 the first half had potential, the second half was weaker. And with season 2 just the opposite, whereas the first part was disappointing, the second has improved some things. This was probably also since the cases here had more content, which made them easier to stretch out to 20 minutes.

An interesting and recommendable season of more short stories.

mushi shi is certainly worth your time. to be honest most people who look here are already 30 episodes in, you made it this far and I assure you it gets better. BUT if you are new to mushi-shi and your reading this then I highly suggest you watch the entire series.

the animation, I said in a previous review that one frame is a work of art and mushi shi nails it every time. The animation and art really help flesh out the world and bring a 1800s Japan come to life.

the characters despite 90% being one offs are some of the best written characters in the business. Really I'm not embellishing this, they have more depth than Almost every shounen/ rom com/ isekai character will every have. These people feel human, the writing and voice acting really excell her.

Its a profound anime that is so calming to watch. This goes really deep and makes you think things beyond yourself. It has great themes and its the perfect thing to watch before going to sleep at night.