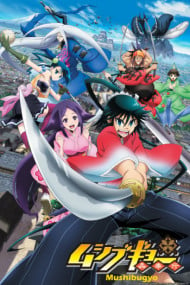 Deadly giant bugs have begun to rampage through Edo Japan, and the Mushibugyou Protection Office must exterminate the threat. With the body count rising, the group requests aid from famed samurai Genjuurou Tsukishima, but due to an injury the man sends his inept-but-determined son Jinbei in his stead. Almost killed in his first encounter with the creatures, Jinbei is saved by his new colleagues of the Mushibugyou: fiery ninja Hibachi, violent warrior Koikawa, young onmyouji Ichinotani, and the enigmatic Mugai. Now, the group must learn to work together to overcome the many-legged menace!

My rival is female ninja, Hibachi!

The Killer of 99, Koikawa Shungiku

Ichinotani Tenma! I Can Do It!

The Hot Guy Beneath the Mask: Nagatomimaru

Training with Father! The Thirty-six Blades of Fuji!!

Mushibugyou follows a young samurai named Jinbei Tsukishima in Edo, hoping to be a member of the Insect Magistrate's office in the place of his father. In the Insect Magistrate's office, their only duty is to protect the peace in Edo from the monstrous insects. When Jinbei got to be one of the members of the office, he met his new teammates namely Mugai, Hibachi, Tenma Ichinotani, and Shungiku Koikawa. But the problem is that, all of his teammates believed that he will quit in less than 3 days and he was too weak to fight the insects.  Story (9/10): Mushibugyou was one of the rare action animes that the MC was not that too powerful and too weak either. The anime's story lets the MC, Jinbei Tsukishima, too grow more powerful and wiser as the series progress. The comedy and the fanservice, "the plots", are not too excessive that may cause a downhill and a sort of a bland taste that leave in the audience's eyes. It also shows how beautiful human relationships are. The transition between the arcs was clean and well-thought that avoided some confusion.  Characters (8/10): 1. Jinbei Tsukishima: Jinbei Tsukishima acted as a human pillar of goodness and hope. Throughout the anime, his goodness towards other people, whether foe or ally, doesn't change a single bit but it became stronger as he met more people,with different perspectives and experiences, as a member of the Insect Magistrate's office. His goodness was first shown when he saved Oharu from getting eaten by an insect. Oharu told him about her parents' horrible death in the hands of the insects and lost hope in living as being eaten was always an everyday activity in Edo; but he gave her hope by promising her that he will do his very best to protect her and Edo from the insect. Later on, with Hibachi, he encouraged and shared sentiments towards Mugai. He helped Tenma to overcome his fears. He admired and strongly believed in Shunguki. His strong determination and will touched Mugai which lead Mugai to open his heart on Jinbei. His promise of seeing the skies in Edo with the Insect Magistrate or Princess Naa. And it made his teammates to accept him and to believe in him as one of them. These things were only some of his goodness list which changed lives for the better.   His iron determination, will, and persistent were also one of his good points. Because of these characteristics, he gave hope to his teammates to overcome the struggles in battle and to have strength that can kill their enemies. Although the foe was not in his league, for example Yukimura Sanada, he didn't lose hope and continued to battle although his body was not in fighting shape. That's because he didn't waver on his philosophy that to win every battles until he died. He also obsessed about being stronger since he didn't want to burden his teammates and didn't want to experiece the humilation that he can't protect anyone on his power. It was also to become an aide for his teammates. 2. Mugai: In the case of Mugai, since he's rarely shown in the anime, he didn't have that much character development compared to others; but his character still plays an important role. Him, being strong and powerful, became Jinbei's goal towards an ideal swordman that can erase people's fear; that honed Jinbei's skills as a samurai and leave a bigger room of development for Jinbei. Although in the anime, his past was shown, it was somehow a little bit lacking in explanation in some parts; like on his reason why he left a criminal group. But he still did show a little development in the anime. 3. Hibachi: Hibachi is the tsundere of the anime. She punched and kicked Jinbei for being a so-called pervert and for whatever reasons. She became Jinbei's first friend in the Insect Magistrate when they both shared admiration for Mugai. As a fellow member, she believed on Jinbei which gave him support. Her character development wasn't that impressive but still worth praising for; for when she became stronger ninja and changed her opnions of Jinbei.  4. Tenma Ichinotani: Tenma Ichinotani was the character who showed a great character development throughout of the anime. From being a cry-baby to being a strong, noble, and dependable onmyoji. He's very likable character since it was like watching a baby to grow up as a good adult. His love for his parents stayed true and his friendship with Jinbei and the others became stronger.  5. Shungiku Koikawa: Just like Hibachi, Shungiku Koikawa doesn't have that much character development. But Koikawa has this misleading image of him. He's a badass samurai who had a clean cut in everything he cuts but he's also a drunkard. But I never thought that he's also quite fair in fights, for a murder, when he didn't strike Mugai when Mugai threw his longsword to the ground, and a little bit a mature and responsible adult, for a drunkard, when he's aiding his teammates in battle.   Overall (8/10): The anime let it's characters to grow and to have a meaningful development. It's quite rare, these days, to find an anime which all of its characters are growing together; not the typical anime in which the main character is only the one who's getting stronger. The story is not confusing and not too predicatble. But the only downside of this anime is that it doesn't have a second season.

We've all seen shows like this: the journey of a weak character becoming stronger, fighting to protect the even weaker citizens and a girl he's dedicated to, unlocking hidden powers or whatever - for what's such a basic and overused plot, you wouldn’t expect to be blown away by such a show. However, Mushibugyou spearheads this genre and went above all my expectations - it will still keep you thoroughly hooked and drawn into this world of flashy fighters battling giant human-eating bugs! The story itself begins with Jin taking his father's place as the next member to join the ranks of the Insect Magistrate, a small group of fighters who kill the large bugs that plague the land. Though the beginning is mostly settling up this new bug infested reality for you, the storyline later goes past simply battling bugs to protect the city, evolving into a more politically influenced scheme with rivals who aren’t just stronger, but smarter as well. The animation in the intro is gorgeous! There’s nothing negative for me to note on the imagery or soundtracks used throughout the rest of the story - the action scenes are excellent and the character designs come in a great variety… including half insect people. <_< Jin starts out weak, but not useless like many of the tropes of the genre, which is a delightful change! His samurai beliefs are incredibly passionate - nothing can stop this kid from training and admiring other fighters or trying his best to be like them. I am a sucker for such loyalty in a character, and the heartfelt intensity with which he faced all his challenges. His overly kind character can be his downfall at times, but it’s also what saves him in many situations... Due to his protectiveness and desire to keep others from being afraid, he gets hurt a lot while saving friends or strangers from danger, too. You really get to love his exaggerated sense of heroism, and as the rest of the cast develops (and I mean develops! You’ll see their backstories and struggles etc) by his side, it makes for a whole team that you care for and are truly engrossed in. Overall, this show touched on everything that I look for in an anime, so I might be liking it more than most viewers would - an almost idiotic main character who is selfless and suffers in order to protect others, no matter who they are, is always gonna make a show great to me. If any of this sounds remotely up your ally, totally give this a shot!! If anything, it’s a thrilling ride and a King Sized Snickers bar on the brain candy scale. 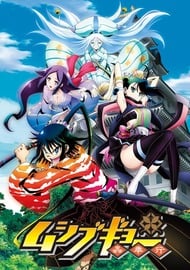 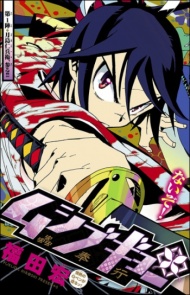 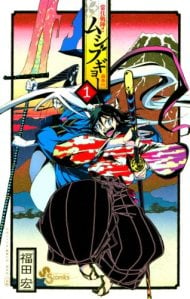