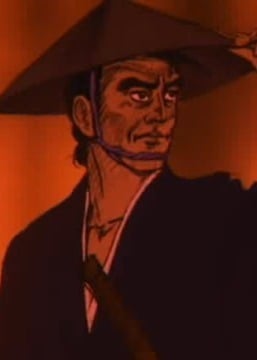 Osamu Tezuka's short film Muramasa seems like nothing special at first glance. The animation is overly simplistic and grainy, the audio is a bit underwhelming, and the premise seems ordinary; however, the outstanding twist that follows makes Muramasa an absolute must-see.

At only nine minutes in length, it's nearly impossible to go into details when discussing Muramasa's story. Let's just say it involves a samurai, a sword, lots of straw men, and a kickass conclusion. Once you finally have an idea of what's going on, you can't help but grin - and that's an accomplishment. While the first few minutes may seem boring, it's definitely worth sticking around for its entirety.

Muramasa has a paper-like appearance which is slightly reminiscent of the game Okami. In addition, little to no animation actually occurs, save for movement in the fields and water; scenes are linked together without fluid transitions.

Easily the best aspect of Murasama's animation is the backgrounds: they are beautiful, are composed of vibrant colors, and set the stage nicely for the turmoil to come.

While interesting and distinctive, the animation isn't necessarily outstanding or memorable. Six points for uniqueness, however.

Traditional Japanese instruments make up Muramasa's minimalistic soundtrack - at times you may feel like you are in the midst of a Kabuki theater performance. While slightly annoying at times, the music is overall "ok" as a whole. The best part, by far, is a transitional song that occurs once the twist is started to be revealed; it is slower, melodic, and haunting - just like the content itself.

There is no dialogue in Murasama; and none is needed.

Only two beings can be considered characters: the samurai, and in a way, the sword. We know little to nothing about the samurai, save that he finds himself becoming consumed by the mysterious powers of the sword. The sword itself is equally as mysterious - where did it come from? Whose hands has it passed through? In only nine minutes, major character development is impossible; regardless, the plight of the samurai is fascinating enough to put Murasama on your "want to watch" list.

I'll admit it - I almost wrote off Murasama in the first few minutes; it's lucky that I didn't. Murasama is delightfully original in its story and ending, and that alone makes it worth a watch.

The short film format is perhaps the most difficult.  To create a world, convey a story and to leave the user wanting more while at the same time giving them a sense of the story being resolved is a difficult proposition in 90 minutes, much less 8 minutes (the run time of Muramasa.)  That is precisely what Muramasa does.

There isn't much story you can fit in 8 minutes.  Fortuneately the samurai genre is well suited to this, there is no need to explain a story as old as time.  Motivations are simple for warriors; power.  The protagonist, an unnamed samurai, finds a Muramasa katana and takes it up.  Those of you familiar with the legend of Muromachi period swordsmith Muramasa Sengo and his demon blades may have some idea of what to expect.  The rest of you read this; http://en.wikipedia.org/wiki/Muramasa.

The art in Muramasa may seem a bit rough to some, but resembles traditional wood block prints (木版画, moku hanga.)  Though they weren't popularized until the Edo period, there is certainly an abundance of prints from the Muromachi period as it was the first means of mass production, preceding the printing press.  By using this wealth of history as his backdrop Osamu Tezuka sends you back in time.  There isn't a whole lot of animation in Muramasa, it's almost a picture drama.  The style presented is nevertheless very atmospheric, and pretty unique from anything else in anime.  My only criticism would be that the concept wasn't extended far enough.  Character models don't seem to be based on traditional art and are somewhat bland.

The music immediately sets the tone for the film.  Eerie Noh flute and other traditional Japanese instruments pervade the soundtrack.  The tone and tempo follows closely with the action and creates a sense of mounting tension and intensity.  The traditional music brings together the traditional art and story to create a fully immersive experience.

The film begins with the caption "A man with arms which can kill people like puppets is not aware that he himself has already become a puppet." It explores many themes related to war and mans desire for power.  The unnamed samurai undergoes a spiritual, psychological, and physical transformation as he follows the path of the warrior.  As he kills more men will he stay true to the path or will he become corrupted by power and the demon blade?

It's probably not apparent from watching, but Muramasa is actually a political metaphor.  Tezuka was an outspoken critic of peace through nuclear deterrence, and Muramasa was made around the peak of cold war hysteria.  Politics aside, there is no doubt in my mind that this is one of the best short films ever created. It no doubt takes some relevant information of Japanese history and culture to fully enjoy Muramasa, but if you are armed with that knowledge I'm sure you will appreciate this masterpiece.