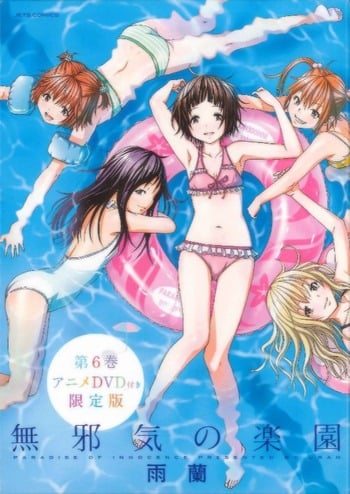 Teranouchi Bon is an average teenager except for one thing: his imagination. As a virgin, he uses his wild and vivid imagination and envisions himself in a sexual relationship with Ichihara Ibuki, one of the heroines from one of his favorite TV shows from when he was a child. Bon finds out that one of his new schoolmates is the beautiful Momose Koharu, who he used to be childhood friends with, and his life soon becomes chaotic. But just when Bon thought life could not get crazier, his world is turned upside down when he learns that the new school nurse is none other than Mitsuba Touko, the actress who played Ichihara Ibuki, his imaginary lover.

Her grandfather is a politician, and her father is a real estate owner. Ninomiya Sayuri is an arrogant young lady who had the culmination of power and wealth during the bubble period. However, it all came down together with the collapse of the bubble. Eventually, she became a middle-aged homeless person. One day, a delinquent threw a rock aimed at her. Just when Sayuri thought she had died while clinging to her past happiness, she somehow time leaped to the days of her high school period...!? To save her family from the tragic future that awaits them and gaining hold of true happiness by not ...

Utsunomiya has been a single virgin until all the way to his 30th birthday. Then one night on his way home from work, something happened that caused a shift in time which made him go back to the past during his days in high school. There, he meets his teacher Shitara-sensei again and somehow they end up living together!?

The Cheerleading Club is trying to recruit the last remaining member of the Rooting Club. Expect an excess of school spirit and fanservice.

Fifteen-year-old Chihiro has lousy luck; however, his fortune soon changes when he wins the kujibiki lottery, earning him a place at the prestigious and exclusive Rikkyoin High School. In this place, the kujibiki lottery reigns supreme, deciding everything from club creations to even choosing Student Council positions - and Chihiro, in a twist of fate, wins yet again to become the new President elect! However, he and his fellow elected officials won't get off easy; the current council requires them to carry out a variety of tasks such as spying and disarming bombs, with the price of failure being explusion from school!