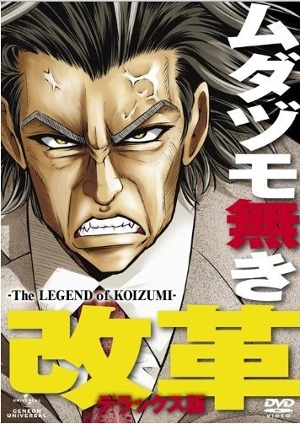 Both shows are so overly epic beyond any reasonable doubt that if you enjoyed how over-the-top ridiculous one show was, you're almost guaranteed to enjoy the other for the exact  same reason.

While The Legend of Koizumi/Mudazumo Naki Kaikaku deals largely with EPIC MAHJONG BATTLES between world leaders in solving International disputes, the show can still be enjoyed with relatively little and next to no knowledge of the game and/or it's rules at all.

If you're looking for some serious kickass, hot-blooded and epic GAR, then these two shows may very well be worth checking out.

Ham. If there's one thing these two have in common is that they're filled with plump, juicy ham. Everything is larger than life, everything is wrought with cheese and it's serious business all around. Both are ridiculous, outrageous and for nearly the entire time, completely bonkers while maintaining an aura of epicness.

Come for the serious epicness, stay for the ham.

Both cannot be taken seriously at all. One's about boxing, the other's about mahjong and both are about cheese. It's serious business in the political world of Mudazumo Naki Kaikaku and serious business in the school ring to win a girl in Blazing Transfer Student. Where they lack in anything plot-related, character related or sensible, they make up for in spades with absurdity, ham, aforementioned cheese and being a parody of the genres they represent. If you enjoy comedies that are senseless and stupid, sign right up for both!

One features countries as bishonen (Bishonen world leaders) kinda acting out history; the other features world leaders playing mahjong. Both are better than they sound.

It's silliness and absurdity abound as neither could be taken seriously and are pretty funny; if you're in the mood for something that wouldn't tax your brain and is comedic. And to top it off, both come in bite-sized installments so you wouldn't overindulge all at once if you watch a handful of episodes.

Though conflicts and struggles continue throughout history, it’s always the little things in life that make it all the more memorable. Whether it’s Prussia complaining about his lack of screen time, Greece attempting to convince Japan to get angry, or trying to find a way to relieve England’s runny nose, the gaggle of gorgeous guys from around the globe will attempt to work their way through any troublesome situation the world throws at them.

Hetalia: World Series is just like it's predecessor; wacky fun with countries. And it's like Mudazumo Naki Kaikaku with silliness and absurdity with cheeseball serious moments. Serious meaning comedic for as hard as they try, they can't keep a straight face. Check out the other if you want bursts of charm and comedy in a political/historical shell.

Looking for more political parodies? Look no further! While Koizumi isn't as crude as Trap-kun, both are over-the-top shorts about our favorite politicians that are a must-see if you like parodies of real people. We love to hate them!