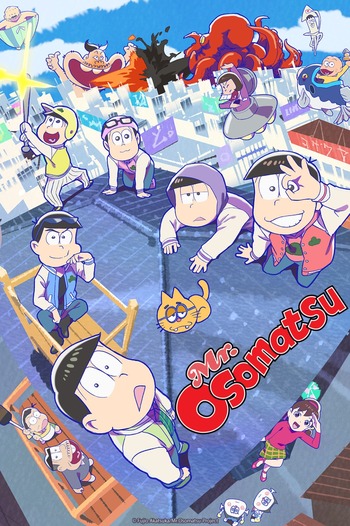 I've been a fan of Osomatsu-san for over a year and I was so excited to watch the third season. There are some interesting things about this season, though.

Positives
➤Usual and decent comedy in this show, as I expected
➤Liked the characters different clothes
➤We get to see a bit in depth more into other characters that didn't make much appearances in the first two seasons
➤NEETs being NEETs
➤The creativity onto these episodes are always amazing
➤Some of the characters we get to see show some interesting sides of their selves
➤Same vibes as watching the other two seasons onto this, which is unusual - kind of

Negatives (neutral/okay)
➤The style tends to change, yes, I've noticed. However, they really didn't use the style they use in the promotions, which is what I was expecting since it's the third season.
-➤ To add, the style before the anime was even produced for season one was different, I know. However, they actually used that style for season one. In season two, they decided to re-master the NEETs and some other ones and it was also shown in the art. In season three, they really didn't use the style they showed for this season. Not bad at all, it was just sudden
➤In the promotions for this season, the NEETs were given new clothes, which showcases more onto their personalities. They didn't actually add much of the new clothes and instead went to their usual signature sweaters and all of that. I do notice that on occassions these are they extra clothes of just chilling, but that goes the same for the sweaters
➤This season's comedy was a bit off. It really didn't have the same vibe as in the other seasons
➤Some of the episodes seemed to reflect on other episodes which already aired. What I mean is that some episodes are too similar
➤I felt like some of the characters just weren't their selves, I don't really know why
-

I'd recommend watching this anime, and yes, this is an episodic-episodes anime; however they do reference a lot back in the other two seasons. Episodic here just have no true story, just a couple of NEETs livin' their life. However, they are a lot adventures.