Mother of the Goddess' Dormitory - Reviews 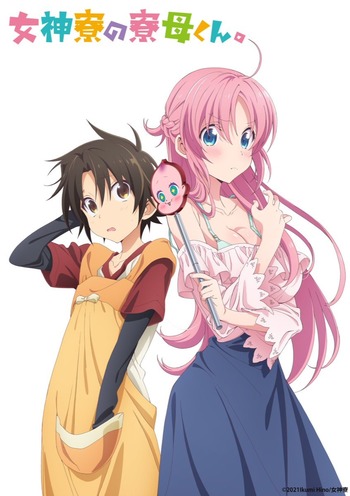 Mother of the Goddess' Dormitory has one of those concepts that we've seen in plenty of other animes. A guy ends up in a female-only apartment. Most of the girls don't consider a guy living among them a problem, but then there is always that 1 girl who thinks that it's a horrible idea, but ends up being the girl that falls for the main protagonist. Normally there is another layer to the story, but this show is well aware that its viewers aren't watching this show for that reason.

The plot may be weak, and the characters may feel extremely awkward, silly and obnoxious at times, but if there is anything that makes this show somewhat of a success than it would have to be the animation quality. The animation quality was better than most of the other shows that were released during the same season.

The cast consists of a 'smart' green haired girl who likes to run around in her panties and a lab coat, a girl who likes to dress everybody up in cosplay gear, a silver haired hoarder who believes she has supernatural powers, a pink haired girl who gets nosebleeds when dudes get near her, a brown haired tsundere girl who can't handle 'warm' (body) temperatures and the red haired tomboy who doesn't know how to control herself when she's wrestling with the main protagonist... and all are fascinated with this young kid that moved into their apartment because he's got nowhere else to stay due to his house having burned down.

If any of that sounds interesting than I really hope you enjoy the show... Story and character wise, it simply wasn't my cup of tea.

When junior high student Koshi is forced to live on his own after his deadbeat left when the house caught on fire, he finds himself as the dormitory mother for girls.

Mother of the Goddess' Dormitory is serviceable. As can be expected in these kinds of harems, there is a lot of fanservice even when there are moments it leans heavily on willing suspicion of disbelief. Aside from this, the show is pretty bland and repetitive.

The characters are fine. Kosi starts off trying to be the responsible caretaker of the women's dorm and getting easily flustered by the girls' lewdness. He does express empathy and we do get him feeling conflicted due to his fears of losing his new home if he were to act on his feelings for the girls, Atena in particular, but he is kind of boring as the main lead. It got to the point where I would forget his name so I'd have to resort to looking it up.

Atena is also pretty mediocre. She is established as the most normal out of the gang of girls beside her fear of men causing her to have excessive nosebleeds. The more she interacts and gets to know Koshi, much like him, she began to have conflicting thoughts primarily whether she'd view him as a brother or something else entirely. Their chemistry is fine for what it is. Though that is largely coming off them having a sibling-like relationship; keep in mind that Koshi is 12-years-old whereas Atena is around 19 years old a seven-year difference. No thank you.

As for the other girls, they are mostly one-note: Kiriya is a tomboyish martial artist who was raised in a dojo. She has the habit of punching stuff whenever she read romantic shonen manga.

Mineru is the stereotypical mad scientist who experiments around often resulting in an explosion or any other unsanitary conditions. She is flirty and lacks common decency.

Frey or Fley is obsessed with cosplaying and designing outfits to the point of forcibly dressing people up without their approval. She does have a meaningful moment with Koshi where she helped him get an understanding of his feelings.

By far my favorite is Serene, an odd young woman who asserts that she is an alien who gets her powers from the moon. Her first appearance has her asking Koshi to become her servant in return for using her lunar technology to clean up a mess Kiriya caused. She had an interesting little side story where she expressed hesitation with going to the beach with Koshi and the girls. Considering that she had apparently lived in the dormitory longer than the others, maybe there is a good reason why the show is called Mother of the Goddess' Dormitory.

Animation, once again, is serviceable. Given its adherence to fan service, the animation is top-notch in that regard meaning that, relatively speaking, it is drawn well, but there seems to be something horribly wrong in how it is conveyed. It's lackluster: the girls do sexy stuff, but there is no real appeal there namely due to the rest of the anime being boring and the characters being too flat and underwhelming. But, taking out that aspect, the show is pretty forgettable and doesn't have a strong draw to it. But it isn't bad, just mediocre.

A classic Harem-esque show, but with a twist of questionable legality. Looking past the MC's appearance, there's a somewhat endearing show here that's a fair sight better than a lot of other Harem/Ecchi out there.

Story: It's a Harem show. There's not much to explain here. The MC suffers a classic Anime-Protagonist-Backstory where he loses his family and basically everything he ever had so that the story can start without any baggage, whereupon he is taken in by a small all-girls dorm and given the opportunity to work as their "Dorm Mother" which, for the purposes of this show, is just a live-in Janitor and Chef. After that, we basically see the show writers check off the Themed-Harem-Episode Tropes in sequence until the show ends with the MC having clearly established his personal Best Girl. It's nothing terrible, and nothing to really complain about, but there's barely anything new in this narrative structure beyond using a MC that's pushing the limits of legal-age laws. Tangentially related; I feel like the show was planned for a Fall season release rather than a Summer release given that the show starts at the beginning of a school year and runs through to New Years' celebration. 4/10; Not displeasing, but certainly not exciting.

Animation: Pretty standard fare for a Harem show, maybe a tad above average. Nothing in particular to call out here, really, except that I was a bit disappointed by how few ecchi scenes we ended up getting. I mean, that's literally the pull for this kind of show, and only maybe every third episode actually had anything to speak of. 6/10; Acceptable

Sound: A bit meh, if I'm being honest. The OP is cute and vaguely catchy, and the Voice work is decent enough, but there's nothing really all that special here. 5/10; I want to hear more of Mineru saying things in her mischevous tone

Characters: Surprisingly the best part about this show. Normally Harem shows have pretty lackluster characters that match the low-effort writing of the story they come attached to, but this one sits pretty well above average. The MC's chosen Best Girl actually shows genuine development over the course of the show, and the supporting cast of Harem Girls feel more fleshed out than the typical Trope-cutouts you see. That said, they're still only good in comparison to other Harem shows of this caliber... they're not winning any awards for character writing here. 7/10; More Harem shows need to allow the MC to pick a Best Girl like this

Overall: Definitely a case where the whole is greater than the sum of its parts. Every individual piece of this is middling at best when you actually stop to evaluate the show, but in the moment while watching it, I was always entertained and never felt upset by the way the show was developing, and that's really all I ask out of these kinds of shows. 7/10; Above average for its genre

Goddess Dormitory loses all its balance by overstepping the ecchi tag with certain animations. This would have been an ideal rainy-day show, with all the usual tropes and gags, but the episodes always seem to take things just a step to far. The story is fairly charming, a displaced young boy ends up living with a house full of college girls, opening their daily lives to heaps of humorous and provocative misunderstandings. Shows of this caliber often lack any kind of arc or story focus, and just go through the checkmarks of gratuitous episodes: the beach trip, the test of courage, the Christmas or Newyear shenanigans and so forth. Mother of Goddess' Dormitory follows this formula and is more driven by character interaction than character or story development. The chemistry is recognizable and predictable, but also comfortable and familiar.

The Animation scores the weakest marks, and it's not a fault of the quality. The animation appears to be perfectly average (or slightly below with certain allowances for the stress caused by Covid 19) for a show airing in 2021. However, the direction behind the visuals takes away from the overall production. I counted at least 21 scenes that pushed the ecchi envelope just a little too far. I would have preferred the show as a whole to either not go there, or to have had less story and went full on ero so that ecchi fans could avoid the tag. I don't mind the awkward plot, but way to often did the show go from a slip, to something wriggling or massaging with too much detail. Less is more in the world of ecchi.

Opening theme and ending theme didn't do much for me, but the background tracks were perfectly fine. The voice actors were over the top with exaggerated performances that definitely sold me on the character tropes. I admit, I actually did enjoy watching the interactions between these odd duck individuals, but every redeeming moment was eventually overshadowed by a playfully lewd gag going two steps too far.  Instead of finding myself immersed wanting to know these characters more, I was constantly sent back into the real world questioning the creative direction. I do think the characters were neat and fun, but unfortunately wasted.

Overall, I just didn't get a whole lot out of watching Mother of Goddess Dormitory. I think the show would have been perfectly average if not for the lewd intensity that felt out of place. While I don't mind have caught this show on its seasonal release schedule, I can't imagine a time period outside of that I would be willing to dedicate to watching this anime. So, save yourself some awkward vibes, and sleep on this one. 3/10 do not recommend.