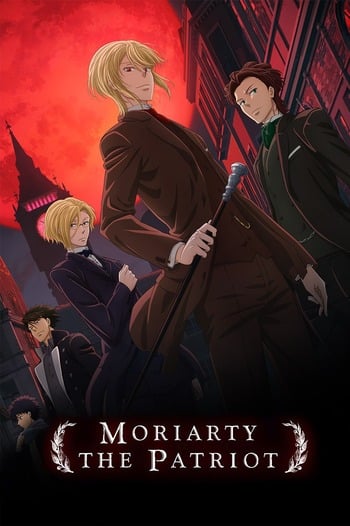 Based on the fictional characters and work by Sir Arthur Conan Doyle, Moriarty the Patriot is a brilliant and fascinating premise for a show centered around criminal investigation. The plot centers around two different view points with the story being focused around the 1880's to 1914's England. The first being Moriarty aka James Moriarty, an expert criminal mastermind and crime lord, who likes to bring corporal punishment to those who ask for his help. He often works alongside his brothers to solve crimes and cases by the request of his clients and subordinates. Moriarty is shown to be ruthless and cunning through his acts and has been famously described by Sherlock as the "Napoleon of Crime". Moriarty serves as the antagonist and archenemy of Sherlock Holmes throughout the story. The other side being focused on Sherlock Holmes, a private detective known throughout the world by his acts of solving crimes to the smallest details and often works with his assistant and friend, John Watson. Together, they plan to stop Moriarty's crimes and mischief throughout England before all hell breaks loose.

Overall, a really entertaining crime solving series that leads you to expect the unexpected, realizing the smallest details by going beyond thinking about solving crimes, and a classic series by Sir Arthur Conan Doyle.

I'm gonna make this short. It isn't your usual sherlock holms story told over and over. This time it puts it main antagonist on spotlight. So far im only 5 episodes in but I got to be honest i'm so glad I gave this anime a chance. It is so far one of my favorites. It does a good job in showing how Moriarty became what he's best known for.. a criminal mastermind.

I had high expectations before wathing this anime because I really enjoy anything Sherlock Holmes related. Mistery, historical places, differences between social classes, murders, all other deaths, badass genious Moriarty (a criminal mastermind? I don't even care).. So many great elements which contributed to this anime which became one of my favourites. I'M SO EXCITED FOR THE 2ND SEASON!

*And the animation design was beautiful, just as beautiful and handsome as the characters teehee

This new take on Arthur Conan Doyle's detective series doesn't focus on Sherlock and Watson like most adaptions. This series however focuses on the origin and history of Prof. James Moriarty. From living in Poverty to getting adopted by nobles we see firsthand how James Moriarty became the "Napoleon of crime."

All crimes that take place are against nobles who all deserve punishment from killing commoners like The Most Dangerous Game to Refusing a child medical treatment everyone who encountered James for his services got what they wanted: Revenge.

When we finally get to the penultimate moment of meeting Sherlock from then on it was all gloves are off. The final 3-4 episodes were so well done and suspenseful that you wouldn't even know what's going on.

I came in completely blind from it's manga basis. I am, however, a bit of a delved person when it comes to mystery and Sherlock Holmes. This being said, I am mainly comparing this to my knowledge of said topics.

This anime isn't your usual straight adaptation. It focuses on Moriarty in the first half, then onto Sherlock. The last 2 episodes centering around their relationship and showing it develop into their known rivalry.

It's a fresh of breath air for any fan of Sherlockian media. Not only is Sherlock depicted vastly different from other media but we also get to see his internal struggles. He isn't an entire mystery but still complicated. He's got his good sides that everyone is fond of but still acknowledges his downfalls and even troubling habits. It's also soooo appealing to see Moriarty get some attention. To his depiction and values in life. However, this deep character delved profile seems to only extend to Sherlock, Moriarty, and Albert. Leaving out Watson, Louis, and various other 'secondary' cast. Of course, this is the 1st season that seems to be setting up a bigger story between Moriarty and Sherlock.

Hopefully, the secondary cast will get some equal development.

While this is unique to the Sherlock Mystery media its nothing absolutely amazing.

We follow a set of murders as see how they play out in an episodic view until we meet Sherlock where a more overarching story is set in stone. This being said, if you know your way around mysteries you can figure out how these murders will play out before it's even explained. Which can be enjoyable but also draws a bit away on that build-up and reveal. It really depends on what you value. Personally, I was a bit of both. I was glad that these were based on fact, science, and things shown within the episode. -save for episode 5 which is the weakest in my opinion-  but at the same time also a bit bored at how straightforward some murders were. Of course, this can be all do to us being on the other side.

Nonetheless, it's rather amusing.

The animation can be from standard to amazing. Some characters do suffer from having the same faces, which is enough to bother me, and stiff movements. However, these stiff movements are usually in calmer scenes when nothing is going on. Things are far smoother and impressive when there is high action. I'm assuming where the budget was being held on for. The expressions are also very great and telling. However, I couldn't help but feel some instances were just too over the top or maybe lesser on the budget side. Usually, present upon the reveal on our target and their ticking death. Which is a bit shameful since I would love to feel a bit more dread and fear rather than the usual anger and lash.

Overall. If you're a fan of Sherlock media then this will be a wonderful watch. If you're not that keen in either murder mystery or Sherlock then this would best be skipped. It does nothing overly amazing but it manages to be just above average. Only the slightest.