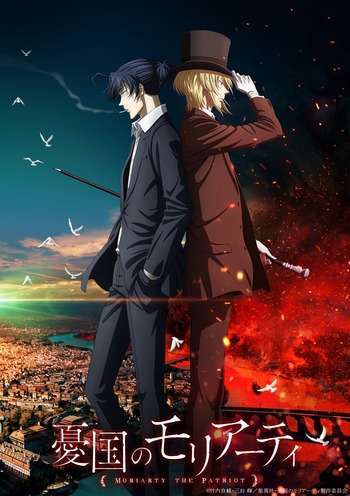 There's no other explanation. It's a masterpiece , just as wonderful and amazing as season 1

One of the best anime i have ever seen. Ending left me speeachles. There is nothing I would change in this anime, as I don't think it is possible to make it even better. The plot, charming charcters and their past, historical referces, tension, mystery. This story shows us a huge devotion that man can have towards their goals, country, society or certain people. Personalities of characters are brilliant as every one of them is totaly different individual and i love how they show us motivation as well as the poit of view of the characters. Also relationship between William and Sherlock is something breathtaking. This anime put me into a lot of reflection and probably i won't be able to forget it till the day i die.

This anime is So good. The plot had me excited since the first episode. While I did prefer the first season a little more, I still really loved this season. This will surely be one of my new favorite animes.

I preferred seeing the crimes that William set up in the first season and really enjoyed seeing how they ended but i also enjoyed watching the Moriarty plan come closer to completion. I did miss those small crimes but if they went on forever then we would get bored anyways. There were some episodes in this that felt a little less interesting but that's to be expected--at the end, it still felt like every episode was purposeful in what it contributed to the plot.

I definetley prefer the firts OP to this one but this one isn't bad either. The ending is nice as well. The music and sound throughout the episodes was good as well. I don't pay a ton of attention to music but it contributed a lot to the mood of the scenes.

I loved all the new characters we got to see and if I were a Sherlock fan, I would probably love this even more. I think some more development into signifigant side characters could have been cool but its not super important as you can still feel the impact of each cahracters role as it is.

Overall, I adore this anime so much and I'll miss it a whole lot. I don't think there will be a third season and I hope there isn't We have reached a perfect end--Something I haven't seen enough due to show cancellations or really long stories. I hope you guys give this a watch and love it as much as I did. [SPOILER]Simple spoiler[/SPOILER]

I usually give reviews on one-season anime or just to first season, but this one deserves a few words. I had high expectations after the first season and they managed to deliver another great season. Not just great, amazing and as many have said before, a freaking MASTERPIECE. If you loved the first season, the second one will not dissapoint.

It was as exciting as the first one. I was sitting at the edge of my seat most of the time. AND THE ENDING WAS PERFECT!

And I'm just in love with characters and their interactions and relationships.

Actually this story still has a continuation and I hope there will be a second season. Or better read the manga.