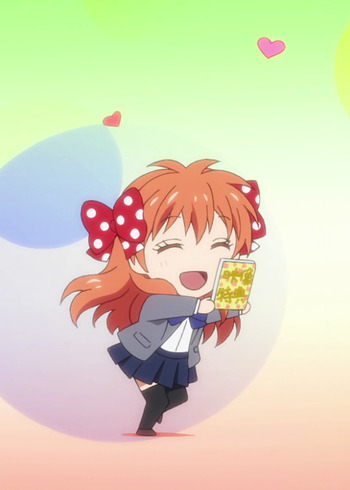 These six, minute and half long, little specials serve almost as the obligatory Beach/Hot Springs episode every anime needs to have, but much like the series itself, it turns things on it’s head by setting up the guys as the eye candy and the girls, mainly Chiyo, as those hoping to get a glimpse of some hot bodies.

What I really enjoyed about these mini-episodes was that each little hit was joke after joke. For every fifteen second clip within an episode there was an enjoyable gag, something that’s very refreshing when considering most of these extras are pointless.

Without the enjoyable intro the sound took a step back, but overall it’s still a great VO cast.

Being that this was just a short episode, and a very funny one at that, there’s little reason to put this far behind the series itself. It had everything you’d love about the show, just condensed into a few minutes.

I love how this started out as a romantic comedy and they seem to have decided to hell with the romance and go straight for the comedy instead. This series has a very diverse set of characters in which everyone can relate too. By far one of the best comedy series of 2014. It’s a good show to watch if you need a good laugh or two

The trick to enjoy the "Specials" is to watch them in one go because they are only three minutes long and each one a continuation of the same story ("Beach Episode"). The gags do not work well if the episodes are watched in isolation. I don't understand why they couldn't just combine the 6 segments and make one single "Special". Nevertheless, its an enjoyable 18 minutes spent.