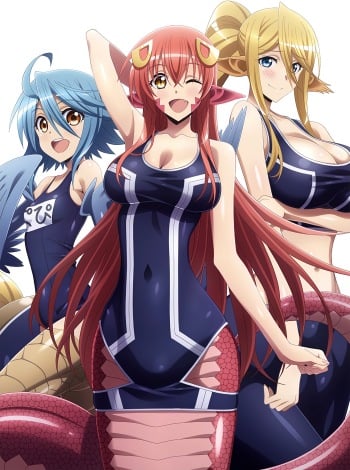 The story of the former hero Loki and his time working at an onsen with his monster co-workers!

Upon winning a fighting tournament and being crowned the world’s strongest warrior, Peter Grill discovers a downside to his newfound fame. Women of all species, from ogres to elves, are scrambling over each other for his seed to ensure they have the strongest babies possible. Poor Peter just wants to settle down with his lovey dovey fiancée, but he’ll have to outmatch, outwit, and outrun a harem of very determined monster girls to do so!

Negi Springfield is ten years old... and a powerful wizard! This boy wizard is the greatest prodigy ever to graduate from his magic school in England. After graduation, however, Negi’s given an unusual assignment: teach English at an all-girl school in Japan. Now Negi has to find a way to deal with his thirty-one totally gorgeous–and completely overaffectionate–students... without using magic!

The Knight Cartoonist and her Orc Editor

Yeld, an orc sick of life in his dark-fantasy realm, decides to move to Tokyo and become a manga editor. One day, he's visited by a full-time armored swordswoman, part-time aspiring manga artist--one who gets practically suicidal whenever her work gets rejected! Between her, a tentacle monster summoned as an assistant, and a slime girl with all kinds of “helpful” manga tools, there's never been a stranger pack of creators! It's the most realistic depiction of the manga industry yet!