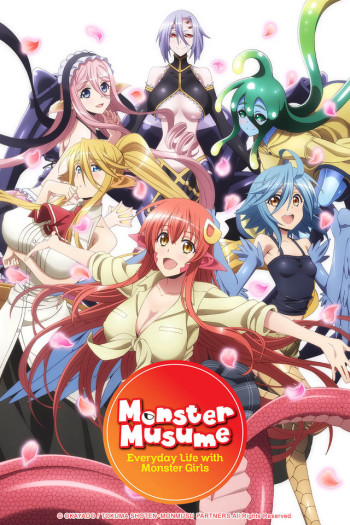 If you're looking for manga similar to Monster Musume no Iru Nichijou, you might like these titles.

The Autana beast race is being hunted down by the Lizard Tribe, and only two mercenaries, the human Eita Touga and harpy Aero, have a chance of putting a stop to the threat. But some in the clan don't believe the duo has what it takes – who will win the battle?

Did you watch Monster Musume and you're up for more monster-girls shenanigans? Then 12 Beast is for you. Even if the setting is different than in Monster Musume it has a similar feeling and plenty of ecchi to enjoy!

Onodera Mamoru is just your average, video-game-loving high school kid… that is, until he’s suddenly transported into a parallel dimension filled with magic and adventure, where monster girls and mayhem await!

Did you watch Monster Musume and you're up for more monster-girls shenanigans? Then Deadline Summoner is for you. Even if the setting is different than in Monster Musume it has a similar feeling and plenty of ecchi to enjoy!

High school student Kazamachi Kunpei suddenly receives a call for help from Dragon Girl Aoinoun Dragoline, claiming that "her children had been kidnapped". Somehow, he managed to capture the fleeing culprit. However, what he retrieved was not the children but instead two huge eggs. Upon touching them, the eggs suddenly began to hatch...!

Eita Touga, a seemingly normal high school student, is secretly the heir apparent to a distinguished line of ninja. Unfortunately for the Touga Clan, Eita has no interest in taking over the family business. More interested in the virtual reality of video games than real life, Eita has sequestered himself to a life of digital bliss. That is until one fateful day, a mysterious harpy girl kicks in the door to his family dojo and spirits Eita away to a world full of monsters and mythological creatures. Can an unwilling slacker of a ninja like Eita help the denizens of another world stave off an invasion by a technologically-superior empire?

Our main character has a meddlesome personality, his father is a butler and whose mother is a maid. One day he meets a rich young lady who cannot even change her own clothes, let alone know what do in the outside world.