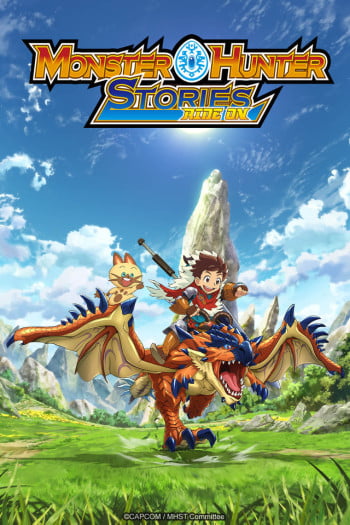 If you're looking for anime similar to Monster Hunter Stories: RIDE ON, you might like these titles.

The Generation of Chaos: Prologue OVA is a brief introduction to the events that take place in the first Generation of Chaos RPG. Two stories are explored: first, Chiffon is a famous monster trainer who has lost his touch. On the way to return his precious monster friend to its birthplace, chaos ensues! Secondly, the daughter of a demon-family comes face to face with the possibility of losing her precious sister at the hands of those who are afraid of them...

Generation of Chaos Next

In the beautiful world of Neverland, a great war against the demons is about to begin. Fredbarn, a snow-filled island to the north, is training its soldiers around the clock for the upcoming battles, under the lead of Lifile, a master swordsman. But amidst the anxiety and fear, two young people still manage to fall in love, as forbidden as it may be. With social pressures to interfere and a war to be won, can Princess Roji and knight candidate Ellile truly be together?

Thirteen years ago, the demon Kazan placed a curse on the continent of Arad, causing legions of demons to sprout from the earth. One young man named Baron also suffered its effects and is cursed with a demonic left arm. Baron now travels the land with Roxy, the spirit who resides in his sword, in the hopes of finding a cure. They are soon joined by self-proclaimed ‘Gunner of Love’ Capensis who literally falls from the sky; freakishly strong fist-fighter Ryunmei; and troublesome young mage Ixia. As they traverse a world of underground fight clubs and axe-wielding demons, will the party be able to find a way to remove the jinx on Baron’s arm, not to mention survive Ixia’s attempts at using magic?

Roan and Yuufa are two travelers in the world of Ragnarok, a place filled with magic, swordsmanship, quests, and of course, Porings! Armed with plenty of spells and potions, the two set off on a journey to find fame and fortune with newfound friends Maya the item-seller, and Takius, a mage who is determined to find the "truth". But with so many harrowing adventures ahead of them, will there be enough heal spells to go around?!

Ash and Pikachu journey to a small seaside town filled with a diverse set of characters, including a young athlete, a compulsive liar, a shy researcher, a bitter old woman, and a little girl with a big secret. Every year, the townspeople gather to celebrate the Legendary Pokémon Lugia, who brings the wind that saved the town from destruction many years ago. The festival is a time for celebration, with a Pokémon Catching Race and a ceremonial flame burning brightly to summon Lugia. But when a series of incidents threatens not just the festival, but all the people and Pokémon who call the town home, it's going to take more than just Ash and Pikachu to save the day. Will these people be able to put aside their differences and work together to rescue their town? Or will it all end in destruction?