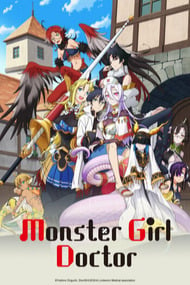 Welcome to the town of Lindworm, where humans and monsters coexist and rookie doctor Glenn carries out some…risqué medical examinations! Whether probing deep into the gills of a mermaid, suturing the thigh of a flesh golem, helping a harpy lay an egg, or palpating each and every scale of a dragon… No matter how different their looks, bodies, and properties, Glenn devotes his all to saving them—and, in the process, winds up in some pretty dangerous liaisons…? But don’t worry—it’s all just a part of his medical exams!

The Centaur of the Arena

The Mermaid of the Waterways

The Flesh Golem Who Hates Doctors

The Lamia With an Incurable Disease

The Centaur With a Sprain

The Harpy Who Couldn't Fly

The City of Dragons' Doctor

First of all I'm a Monster Musume no Iru Nichijou fan, and this Anime is Crap. And to recommend this if You liked the other one is just BS. Everything about it seems forced and boring. The examination, the romance, the harem part, storylike all of this is plain and without fun. The Doctor is like a Zombie, the Lamia Assistant is shallow (not even 1 simple emotion, just tail wrapping). I guess the Examination parts are supposed to be somewhat Ecchi, but they feel more like awkward - zombie doctor, the Lamia trying hard to be proffesional and the Patient  moans. Mixed up it's just 'Eeee.... That's it?' The Story - who cares about the story if the characters are so boring? Beside character design (subjectiv, but these characters are simply ugly), Animation and Audio looks like an honest low budget Anime. All together it's a huge let down, instead of a funny romantic (harem) comedy it's like an antiseptic gauze - it's supposed to have everything you wanted it to have, but in the end it's a boring bandage for your needs. <h1> </h1>

No spoilers- This anime follows a young Dr. Glenn, a human who specializes in treating monster folks, of which live integrated in human society. Together with his Lamnia assistant Saphentite they help treat monsters in different communities, establishing Dr. Glenn's practice as a physician. The plot is enjoyable but nothing groundbreaking, with the ending closing the anime well. I enjoyed the monsters' designs and wish we could have seen more of them throughout the series.  However, I think this anime would have benefited greatly by choosing one genre and sticking to it. It was essentially a slice of life anime but with heavy ecchi vibes, however the animation did not reflect its ecchi characteristics.With the way it was animated it felt like the anime was trying not to be ecchi, making a lot of the scenes awkward and unenjoyable to watch. Because of this disconnect I feel like the anime fell short with both slice of life and ecchi viewers. That's not to say it was a bad anime, it just felt weird to watch because I didn't quite know what I was supposed to expect and get from it.  As a whole, the anime was a light but very mediocre watch.

An obvious comparison to make is with Monster Musume. This show is markedly different, though, enough such that I'd say the only similarity is simply having Monster Girls in a Harem. It's less "Let's make a discount Monster Musume" and more "Let's make a generic ecchi/harem anime, but add in some knock-off Monster Musume character tropes". Story: Not much to go with here, really. It's almost a slice-of-life anime in that regard. All but the last 3 or so episodes are a self-contained story about the MC encountering the Monster Girl of the week, discovering that she has some mysterious ailment that she refuses to get checked, and convincing her to allow him to examine her in a totally-innocent-but-feels-really-ecchi way. Monster Girl is cured, and showers MC in praise and vague romantic hints that he completely ignores because he's that kind of Harem protag. Eventually the story culminates in his hardest treatment ever where he has to call on the aid and skills of all of the other Monster Girls he's cured along the way to help him cure the loli dragon, and the story ends with them all fighting over him. 4/10; better than some Harem, but still sub-par as far as stories go. Animation: Hit-and-miss, really. There's some really beautiful moments with well-drawn characters and amazing color palletes. And then there's moments where there's some really mediocre CG or just generally bland animation. It's obvious most of the budget went to the ecchi 'exam' scenes. 6/10; above average, but a far cry from high-quality Sound: Pretty decent. It has a nice upbeat, if generic, OST, and the Voice Acting is quite good. The opening is in that awkward sweet spot where it's good enough to listen to every episode instead of just skipping, but the song is forgettable enough that you won't have it stuck in your head. 7/10; a good example of the mantra that "if you did it right, nobody will notice you did anything" - there's nothing that stands out here as notably good or bad. Characters: A really mixed bag. In isolation, each of the characters feels really well designed and thought out, with interesting visual design and believeable character motivations. But there's two major downsides once you take them out of isolation. As an ensemble, they clash, both visually and story-wise. It feels like different writers each created these girls without talking to each other and just stapled them into the same story together without making them have similar art styles or compatible personalities. Characters that have to interact with each other just do the things because the plot says to, not because they feel like they'd actually work together. Furthermore, taking the scope beyond the anime itself, it's pretty clear that a lot of the designs were a case of "Sure you can copy my homework, just change it enough that it doesn't look like it". You have the blond horse lady that's all noble and proper but secretly wants to get married. You have the spider girl that likes stirring up trouble because she has a bleak backstory. You have the hardcore pseudo-military-girl Zombie. I could go on. 5/10; I do really like some of the designs and motivations on display here, but it's hard to take them seriously when they don't really mesh with each other and they seem to be obvious "that character from another show, but different!" rip offs. Overall: A middle-of-the-road Harem anime that's worth watching if you like wholesome ecchi scenes and/or Monster Girls, but entirely skippable if you're looking for something out of the ordinary. This is absolutely your bog standard Harem-but-kind-of-wholesome show, just with a Monster Girl pastiche laid out over it. 6/10; Not at all upset to have watched it, but likely going to forget it within a month or two. 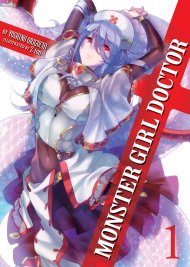 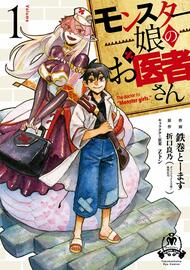 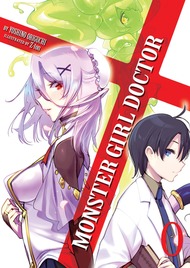