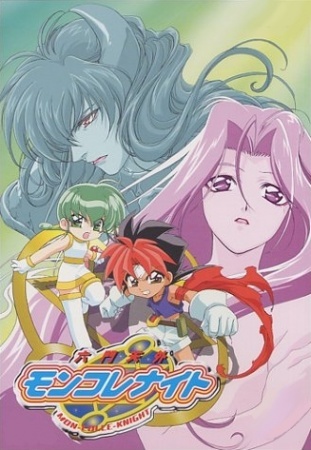 Background Info: Rokumon Tengai Mon Colle Knights is a kids show. It premiered in the early to mid 2000s worldwide. I first saw this show on TV while it aired on Fox Kids. TVB was broadcasting it worldwide when I went on my childhood overseas vacation back in 2007. I picked up the series again to get a taste of childhood nostalgia. This anime is one of the series that is more enjoyable the younger you are. Children squirm with excitement at battle style monster shows.

Mon Colle stands for monster collecting. Two competing teams utilize anime mecha technology to enter the atmospheres of the magical Mon world. The Mon world is an extra dimensional world where monsters dwell. The monsters  can magically  morph into cards to be utilized by their human owners. The two protagonists are Rokuna and Mundo. They are collectively known as the  Mon Colle Knights, tiny children that can fuse and enhance their powers with the monsters from a foreign world. Their dream is to collect Monster orbs to grant their wish: combining the human world with the monster world. By linking the two worlds, they hope to befriend all the monsters and ignore the potential bad consequences of their wish. This show is targeted to kids. It won’t go very in depth with all the negative consequences that can happen if those two worlds were suddenly interconnected. It also won’t go into depth with any plot holes or unexplained phenomenon since it’s simply a kids show.

The anime is very easy to understand, and simple. It’s a simple shounen kids show with a plethora of magical monsters. Some monsters resemble supernatural creatures like angels, vampires, and mermaids. Other monsters resemble cartoonish animals.

The sequence of events can be very redundant. Several scenes are repeated in every episode such as the fusion scene of the Mon Colle Knights with the monsters, and the mecha lion scene.

There’s not much character development since it’s a stereotypical kids show involving the kids’ adventures and encounters with  monsters. The characters retain their personalities, and barely change. Overall, the characters are very generic.

Note: This anime is regarded as a Pokemon rip off because of it’s similarities: the monster themed battles, the villainous trio, the mecha, the silly humor mixed with the shounen battle scenes

The artwork is decent. The character designs have a certain 1990s look. The eyes have white polygons to emphasize certain facial expressions. But the colorful scenery and quality reflect the time period of the early to mid 2000s. Also the highest resolution is 720 pixels. The  dimensions fit the standard size of films made for VHS tapes.

Overall, I gave this anime a 6/10 which translates to slightly better than average anime in my rating scale.