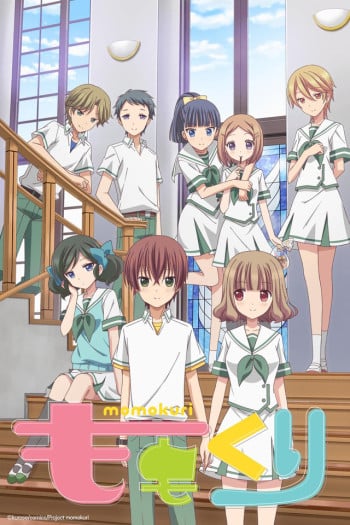 Both have the same intimate romance where girl aggressively follows guy, to the point that their relationship is almost of that of a married couple.

Both have the same plot where girl pursues guy, except one is seinen while the other is more of school.

Even though Momokuri is nowhere near as dark or action oriented, both shows feature a story of a growing couple with dynamic and misunderstood loves where the female mc feature stalker qualities. Momokuri goes about it in the form of a RomCom while Future Diary is much more violence driven. Very interesting relationships featured though

Very similar, except this one is a heck of a lot more mature and also, at the beginning they are pretend girlfriend/boyfriend

While Momokuri and Future Diary have respectively light and dark tones and share different genres (the former being a peaceful slice of life romcom and the latter being bloody violent and action oriented), they share the same romantic plot where the main heroine stalks, is in love with, and obsesses the male protagonist.

Both of these shows contain the storyline where the main heroine has a giant crush on the male lead. Differences are Inari Kon Kon is more fantasy (I guess)-oriented whereas Momokuri is more a down to earth slice-of-life (but still a comedy), and Inari isn't as stalkish and/or obsessive as Kurihara.

How obsessed can a main character be with a member of the opposite sex?

The answer may surprise, terrify, delight, repulse, or please you to no end.

There is no accounting for taste and over the top actions to get close to a love interest are abound in each episode of both animes.

Looking for some lovey-dovey sweet (potentially) stalkerish, slightly-dramatic behavior then give these a watch, or if you’ve seen one check out the other.

Also as Momokuri follows a female main character and Rainbow Days a male, seeing the similarities between the two as they go about obsessing over their crush is pretty entertaining.

Quirky but heartwarming middleschoolers being absurdly cute and wholesome to each other. There's no romance in Hitoribocchi (at least so far) but they have the same energy.

Both anime have cute likeable characters, wonderfull colours and simmilar directing. They are both about first love / crush feelings and wierd things we do when we fall in love. Very funny and warming comedy moments.