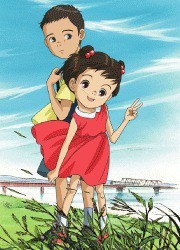 If you're looking for manga similar to Momoko, Kaeru no Uta ga Kikoeru yo., you might like these titles.

A one-shot about a grade school class that tries its best to accept a girl with impaired hearing.

Returning from school, third-grader Ryunosuke is introduced to a young girl. His father tells him that she will be his little sister starting that day. Her name is Koharu. She is blind and her arms and legs are prosthetics. She holds within her a power beyond human understanding...

Yurina has set aside her painful memories of being bullied by Takaya, and accepted his sincerity. They're now dating and slowly rediscovering themselves, but their kindergarten classmate Nogi dredges up their past and vows to "rescue" Yurina from Takaya's evil clutches. Will Takaya and Yurina's love - a love that started off on a bad footing - withstand new trials, growing uncertainty and revisits to the past?

Nanae lost her vision when she was 27 years old. But she never lost her dream to be a good wife and mother. Berna, a guide dog, helps her to reach all of her dream.

Over her winter break, an apathetic girl befriends a blind girl.

Kunieda, who recently entered SMP High School, was immediately antagonized by her classmates. She was bullied by them everyday. Trash was piled on her desk, and her pencil case was filled with thumbtacks. Kunieda even has to eat lunch in the girls' bathroom to avoid being harassed. Among the classmates who didn't bully or mock her, there is a guy who cares a lot about her. He helps her through the crisis, as well as invites her to eat at his usual table.

In middle school, Ichinose Kimitaka taught his friends how to play basketball. Despite his experience with the sport, his friends quickly outmatched him in skill. After an incident brought on by his frustration and jealousy, he was crushed and on his way to toss out his basketball shoes. He met a girl who was just as frustrated, throwing her dancing shoes away after been rejected from her hobby. He urged her to give basketball a try, and the two exchanged their shoes instead of throwing them away. As he enters high school, Kimitaka learns that she is now a happy, social basketball player. Will Kimitaka be able to find the courage to make new friends and pursue his own talents?