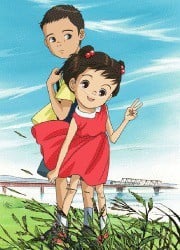 Momoko, who attends a special school, is both mentally and physical challenged. Every morning she becomes peevish because she can't go to the ordinary school with twin brother Riki. Her family soothe Momoko by singing her favourite song "The Song of Frogs"

622 users are tracking this. Log in to see stats.

For such a high-rated movie in Japan, this was not easy to find in the USA.  As it is a beautiful and heartfelt anime, I don't know why it never made it outside of Japan (with the exception of watching it online). I don't claim to have the best knowledge of the Japanese language, but I knew enough to understand most of what was going on in the movie.  Otherwise, I wouldn't even attempt to review it. Story Riki and Momoko are twins born prematurely, but while Riki managed to develop just fine, Momoko became sickly and had both mental and physical disabilities.  Despite that, she remains cheerful and determined despite her sad feelings of wanting to be normal; to go to the same elementary school as Riki. On the flip side, Riki has to deal with jealousy since his parents need to pay extra attention to Momoko mostly due to her physicla limitations.  This includes him having to stay home by himself whenever Momoko needs to be hospitalized due to health complications. Things start to get compounded when Momoko is allowed to attend school with Riki, which irks the class bully, Ryuji. Characters Considering that the major characters are Momoko and Riki (with, of course, features with their parents), the kids are fairly well established. Riki is a typical 3rd/4th grader, though he has feelings of being lesser or not loved as much by his parents (something that a lot of viewers with siblings who have disabilities can probably relate with). Momoko goes to a special school for the first half of the movie, and wants to get better since even at her age she has to deal with the looming fear of death due to her illness.  She wants to be normal and fit in at Riki's school (something viewers with disabilities can definitely relate to). Ryuji isn't so much a class bully as he just mostly targets Riki (and later on, Momoko) as pressure put on him to do well causes him to lash out. Music/Animation Although the anime was produced in 2003, the animation style is closer to that found in 90's anime.  That aside, at least that meant there was no awkward movements or CGI in it. The sound...well, the voice acting can be a little weird at times.  Sometimes, it felt like the characters were flat, and other times they really matched whatever emotional scene was being animated. No complaints with the Frog Song or the ending song; in fact, the song at the end of the movie is beautiful. Overall If there was a movie which should have been brought outside of Japan, it's this one.  It's a beautiful "coming of age" sort of story, with emphasis on the struggles of Riki and Momoko as well as other kids who are uncertain around the disabled at first but slowly learn that they're not so different after all. I don't often see anime which feature disabled characters, as even in a normal society, disabilities have stigmas attached to them and are often feared and-or misunderstood (both physical and mental disabilities). It was nice to see an anime address that topic, as it still continues to this day.  The stigma (at least in many countries) isn't as bad as it used to be, but there are still a lot of people who are uncomfortable when presented with a person with a disability. That said, get your tissues ready if you're going to watch it, because this anime moved me to tears...and I'm sure I'm not the only one it made cry. Though I have a lot of good things to say about this anime, it's not without its faults...though one of the faults comes from most likely the fact that it's a movie (Ryuji's character development, which was sort of a silent thing.  It wasn't off screen or anything, but there were only a few spoken lines given to give the viewer a clue as to why he made the decision he made). Other than that (and some flat voice acting at times), the movie was fairly easy to understand even for someone who doesn't know much of the language (well, okay...I understood about 90% of it thanks to watching subtitled anime for years). In the end, if you can find this to watch it, I'd highly recommend it.

I am glad that i got to watch this and i learned a lot. This anime is really great with so much feels to it. I will just warn you that "watch it with a box of tissue paper".

Oh this thing still pierce me when i remember ending which overwhelmed with feels... Even strongest wall can sometimes break... - Illusion123chan Story: It's about twins Momoko and Riki. Riki is few minutes older, booth were born premature but Momoko had to suffer a little bit and she is light hendiceped. Brother starts to strugle when Momoko came to his school cause he was thinking what would anyone say. Surprise mfka everyone starts to like Momoko except one guy Ryuji which is such a pain in the ... Even if you probably know what will happen, this show manages still to pierce you through the hearth and make you shed tears. Great, great story. Animation: Animation was perfect, every detail, character looking except few things where i almost laughed ( i'll probably go to hell ) at hendiceped kids cause of their head shapes... Everything was so perfect, enviroment,details,... Sound: Well this is just a pushed in feels, when this combine with story and other things, its piercing.Only flaw is a little voice acting, where i expected to be screaming and agony i didn't saw that much of that. Characters: Now here we have a good characters and characters with hate-love relationship. Ryuji is bully, which have his narcisstic father that just order him to study cause he doesn't want him to be surronded by idiots,... He express his pain and other feelings through bullying others and he says whatever he wants, he just doesn't care about what he said cause he doesn't think. At the ending he gets a little bit better dude. Riki is Momokos younger brother whitch strougles with " dissapointment " cause sometimes his parents are giving more attention to his sister, and he later realizes everything. He was cheerfull and good through whole movie, he defended Momoko of others untill things started to get better. Momoko ( my poor little sunshine ) is few minutes younger than Riko, when they were in kindergarten they could do the same things, but as they start growing older, shes hendicep showed more and more. She is always cheerfull, fighting through pain with smile, she will break your hearth. Overall: This movie was amazing, story that gives you goosegumps with few scenes ( i know cause at one scene i had feeling like my long hair would go straight up ) characters which will make you connect with them in 10 minutes and everything. Totally recommend it but since this movie is little unknown ( only 60 people watched it on this site at the time of this review writting ) i doubt anyone would read my recommend. Anyway golden show, full of feels and empathy. If you liked this review you could follow me on Anime-Planet as appreciation :)