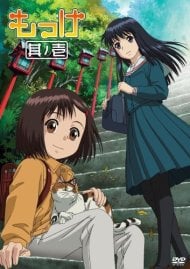 Story Recently worn out from the recent sword slashing action of Chrome Shelled Regios, to the high-sea adventures of One Piece, I thought it was time for a change of pace. Having skipped over Mokke for a long time, I finally bit the bullet and settled down to my least favourite genre - a slice of life anime. It didn’t take long to realise the delicate development and supernatural focus of the show made for some excellent viewing, giving a great excuse to pass time whilst learning more about Japanese folk lore. Set around the lives of two innocent sisters, Mokke explores the influences mischievous spirits have on the lives of Mizuki, a girl easily possessed, and Shizuru, whose natural sixth sense can see those from “the other side”. Essentially episodic, many viewers may be put off with a lack of underlying storyline and the slow pacing of the show. Each 24 minute slot features a different spirit that somehow affects the lives of the girls, whilst explaining in depth the myths and beliefs behind the trouble-making entities – many of which you have probably met in other anime series. Teru Teru Bozu rings a bell? Although the supernatural element takes the spotlight, there is also a good amount of the series dedicated to Mizuki and the struggle to come to terms with both her unfortunate gift and the world at large. Watching her otherwise typical childhood spent flying kites and exploring suddenly spoilt due to possession by a cheeky apparition gives the viewer a sense of empathy. Her school life can be difficult enough without the added awkwardness of being unable to cross a bridge due to a spiritual hotspot, or the responsibility of protecting a Kesran Paseran. The wide variation of myths and the young girls’ reaction to them saves the overall premise from becoming boring by the 24th episode. The depth in which each occurrence is explained fascinates, but is explained in the language of a child yet the wisdom of a grandparent, making this show accessible to a wide age range. The only reason I feel I couldn’t score the story higher is due to the wasted potential that came neatly packaged in Shizuru. Mokke is essentially centred on Mizuki, but her elder-sister’s ability to both see and communicate with the mystical beings is almost entirely shunned. The small handful of episodes exploring her powers are vastly enjoyable, and I would like to see more of her grandfather teaching her in “the old ways”. Animation Standard cartoonish characters and scenery is occasionally brought to life with subtle CG that sparkles in the surroundings. Unfortunately, these stunning moments are not frequent enough to make the animation feel particularly special. The characters feel pretty standard in some beautifully drawn settings, with large eyes blinking on heads that may be a little too large for the bodies. Despite these minor flaws, the characters move with an amazing fluidity, even for a primarily stationary drama series. Sound The audio is quite simply stunning; poignant pauses punctuate delicately simplistic instrumental pieces ranging from shamisen to piano. From the touching opening vocal track that serenades a montage of beautiful scenery, to a closing tune that is a little more upbeat, every note of the soundtrack seems perfectly chosen. With the music being one of the strongest points of the show, it is successful in drawing the viewer further into the mystical Mokke world. The seiyuu are also well fitted to their roles, breathing life into their characters. Mizuki is playfully cute, whilst Shizuru has a more refined and responsible tone of an older sister. The voices bestowed upon the supernatural featured throughout the series definitely add to the overall metaphysical atmosphere – the mischievous and harmless spirits sound just that, whereas the darkly warped performance of a malignant house God was genuinely creepy. Characters Remember those days in your adolescence when you spent long summer days running through wide open fields, looking for a new adventure? That is the feeling that emanates from Mokke, as Mizuki freely lives her life as a child. With sweet naivety, she struggles to overcome those that would possess her for their own gain whilst pretending to befriend her. Watching Mizuki struggle to explain her behaviour to her school friends invokes a sense of nostalgia and sympathy from the viewer. As previously mentioned, Shizuru is a fascinating character who does not receive enough screen-time to shine. The precious moments of her story are fascinating; watching as she comes to terms with her gift, and her struggle to help her younger sister through her difficulties is just not showcased as thoroughly as it could have been. Overall Although Mokke will only appeal to a small niche of the otaku community, those who can appreciate the slower paced can definitely enjoy what is on offer. The mix of adorable characters and supernatural beings bestows an education in Japanese folk lore and the superstitions these have spawned. Be prepared to sit back and enjoy the audio and visual without being tied down to an overly complicated story, as this show is definitely one to be savoured during a quiet moment in life.

Shizuru and Mizuki are two sisters living with their grandparents in the countryside. Shizuru has the ability to see spirits, while Mizuki has a tendency to get possessed by them. The two of them learn to coexist with the variety of apparitions around them, guided by the wisdom of their grandfather. Very picturesque animation, with a slow pace to it, reminiscent of both Mushishi and Aria. 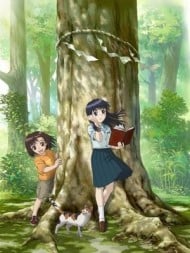 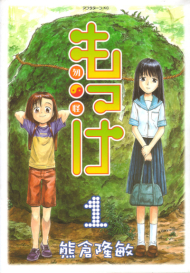