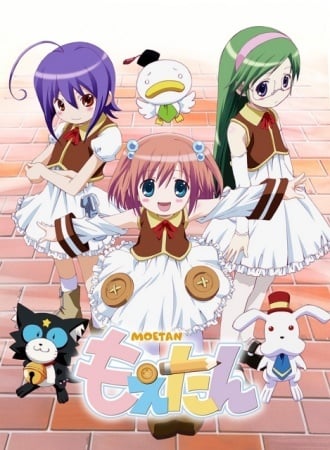 Ink Nijihara, who does very well in her high school English class, has a crush on her classmate Nao; but as she is both shy and clumsy, she finds herself unable to get closer to him. Furthermore, since he does poorly in English, he does not intend to go to a university, crushing Ink's dreams of going there together with him. Out of the blue, a talking duck who turns out to be a polymorphed (and perverted) wizard exiled from a magic kingdom falls from the sky and lands in front of Ink. He offers her magical powers in return for helping people in need. Ink sees the magical girl transformation as a chance to help Nao with his English without feeling embarrassed about it, and thus she begins her adventures as Magical Teacher Pastel Ink!

Lolicon magician is exiled to the human in duck-form and grants magical powers to Ink Nijihara in order to accrue enough good-deed points to return home. It's a perfectly fine show but it really ratchets up the loli-leering and so is really only for fans of the genre. I like it when a character in a show gives a perfect one-line review, this occurs when the cat says "What hell kind of anime is this?" And I think that sums up my feeling at times. But it gives a nod and a wink to the watcher with some parody and lines like "now for some random nudity!" Saccharine fun.

Magical Change! Two loli girls do their magical transformation meanwhile two magicians polymorphed into a duck and a cat drool and get nosebleeds from watching. Yep, basically what this show is about is taking the mahou shojo genre and creating a hilarious parody. If you find a klutzy girl teamed up with a perveted duck who practically swims in pools of his own drool funny then you'll enjoy this show. Story: 4.5 Ok, there's not much to the story on this one. Number one magician Arks is expelled from the magical kingdom, transformed into a duck and dropped on earth. There he teams up with Ink Nijihara, a highschool girl that looks and acts like a gradeschooler. Using the powers granted to her by Arks she transforms into Pastel Ink! Thus begins their outrageous adventures such as fighting a giant octopus and bringing an old guy a glass a water after he overeats rice balls! They basically do everything they can to make fun of the mahou shojo genre and it usually comes out being pretty funny. The usual male hero that comes out of nowhere to save the day in these kinds of shows is replaced with a suspicious guy in a trenchcoat but Ink is so oblivious she doesn't notice how creepy he is. Animation: 6.5 Lolis transforming into magical girls and using amusing powers is the height of this show's animation. There's nothing too spectacular in this department, but its not bad either. Sound: 7 The voice actors did a decent job on this show. Ink's voice is about as cute as it gets and Arks and Karks have pretty funny voice actors. The Opening and Closing songs are pretty good too. Characters: 7.5 The characters in this show are hilarious. Klutzy and easily embaressed Ink has a big crush on her precious Nao-kun who has a good foot and a half on her in the height department. This makes her dreams of being together with him hilarious because it looks like he's a highschooler hanging out with a little kid. Ink's rival Sumi and her maid add a lot to the comedy. Sumi enjoys her sleep while her maid enjoys pulling pranks on her while she sleeps which can be hilarious. Then there's Dandy-san, random guy in a trenchcoat who stops to help out Ink from time to time before being chased off by a policeman. Last but not least there's Arks and Karks, lolicon magicians that can't get enough of watching the girls' magical transformations. There are a few minor characters as well that also add to the humor. Overall: 6.5 So this show isn't exactly a masterpiece. It's still funny to watch even if you're not a fan of the mahou shojo genre. When it comes to mahou shojo parodies this is the funniest one out there, if you've seen shows like "Magical Girl Lyrical Nanoha" and "Mahou Shojo Madoka Magica" you'll see a lot of jokes that reference these shows. For all the unexplainable things you usually find in the mahou shojo genre Arks says in the show "Don't worry about the details" 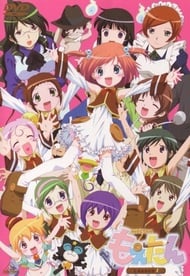