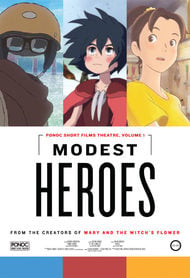 The film is the first volume in the studio's Ponoc Short Films Theatre anthology, and includes films directed by Hiromasa Yonebayashi, Yoshiyuki Momose, and Akihiko Yamashita. As you may know, Studio Ponoc was founded by former Studio Ghibli lead film producer Yoshiaki Nishimura after the dissolution of the Ghibli Production Department; and as such, it has the same great animation and sound as you expect from a Ghibli film. However, in their previous work, Mary and the Witch's Flower, the storytelling was not quite there. Thankfully, it seems they are getting everything together for these shorts, as the stories are great and everything you can expect from former Ghibli team up to make a name for themselves. This film's three stories all have something to say with eloquent visuals: 1. The first short, Kanini & Kanino by Hiromasa Yonebayashi, takes us into an underwater world where we explore the lives of the protagonist from their perspective, and their struggles to survive in such a world. Is reminiscent of The Secret World of Arrietty, but underwater, which was also directed by him. In this short we see full use of the animation and music to bring this fantasy world to life. It has barely any dialog, so it can be easily understood by young kids. 2. The second one, Life Ain’t Gonna Lose by Yoshiyuki Momose, depicts an elementary schoolboy who has a life-threatening allergy to eggs, and his family struggles (especially his mom), in their everyday lives to keep him safe. 3. The third, Invisible by Akihiko Yamashita, who is better known so far as a character designer, explores the loneliness and alienation of a man who passes through society unperceived, making full use of the animation not just to symbolize how invisible he appears to others, but also to create visual storytelling conveying more meaning than words alone can. 4. Sadly, there was supposed to be a fourth segment by Isao Takahata. He was very enthusiastic about the idea, but he passed away during pre-production. Here is a good article about the shorts with more information: Artful Trilogy: Studio Ponoc’s "Modest Heroes". I definitely recommend this anthology to everyone who likes Ghibli films and shorts. It's a good movie to watch with the family. The dub is great.

This movie is split into three portions and in each of these clips it shows some person being heroic in one way or another. I don't really understand the plot