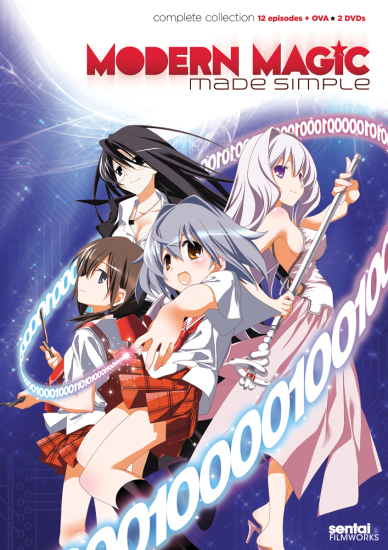 This series has some pretty harsh reviews, eh? Well, honestly It's been a good year or so since I last watched it, but I'll give this a try anyway.

Anyway, this series isn't exactly "Great" but it's not exactly that bad either. It was pretty mediocre. I enjoyed it myself, but hey, that's just me.

Gendaoi Mahou follows the story of Morishita Koyomi (I'm not sure if that was it. I think it was) who wants to become a Magician. However, these days, no one uses regular ol' magic anymore, it's all about "Modern Magic" that uses programming, to learn this Koyomi and her friend Kaho become apprentices to Anehara Misa, whiz at Modern Day Magic. Add in a tsundere gal that uses what's now known as "Classical" magic, and you've got this series.

The bad part about this series, for me at least, was that it was so short. I think if they had have made it longer, there's a lot they could have done. The series also starts out pretty confusing, having a time traveling-time skip right from the first episode.

It has Ecchi elements, but wasn't Ecchi heavy. The story was kinda weak, but I still found it entertaining (then again, I find pretty much any anime I watch entertaining) which is ultimately failed by the ending, being so...just ugh.

The characters are what was best about this for me. I found the main cast's interactions with eachother to be humorus and kept me entertained throughout the series. The series also has a great Opening/Ending song, which is probably what entertained me the most.

Overall, if you're just looking for a nice, relaxing sort of anime to just take a break and chill with, then I can recomend you this series. If not, give it a try anyway. You might be surprised like I was.

THE STAFF
- Animated by Nomad, a minor studio which has never produced something great. Its most famous shows is this one and a rather silly mediocrity, called Chocotto Sister.
- Directed by some nobody who has made nothing but trash ecchi shows.
- Based on the light novel of another nobody who never adapted anything else.

SPECIFICS
Watching this show one will eventually wonder what exactly the point is. I mean, you clearly see there is a story in it but the directing is plain ludicrous, jumping from one scene to another, or even from one point in time to an entirely different one, with little regard to smooth transition or proper explanation to the viewer. And then you look at the character designs and you easily figure it out.
IT’S FREAKING MOE!

The animators chose style over substance and thus most of what you see is cute girls doing cute things. All the rest, to heck with them. Which is a shame since the story had potential to be very good. It is a setting where magic and technology bind together and all sorts of supernatural things can happen through computers and cell phones. It is also about the villains in the story trying to manipulate encoding memories and powers stored in relics and people for power and authority. And it’s also about our heroines fighting them just to protect the traditions of old, while maintaining the balance of the world.

Very good so far but you see on screen is a bunch of confusing scenes, placed poorly one next to the other, that usually don’t even follow a line of thought, motif, or even emotions. So what you watch is something like this: Two girls are fighting a villain with superpowers. Now we are back in time when one girl meets the villain. Now the other girl comes from the future to aid her. Now they are fighting again. Now they eat cake and buy clothes. Now they type codes on a computer. Now they are having a bath. Now they are fighting again. It’s all a scrambled pile of unfitting with one another scenes, mostly around cute girls and weird explanations of how magic works in this series.

The end result is plain horrible; not only you can’t follow the plot but you also end up being bored with the moe girls since they look generic and act even more generic. Character development is close to zero, and even the hints of evolution or dramatic exposure they try to show are all messed up to be confusing and superficial.

Being moe means high production values. Despite the generic looks the girls are indeed cute looking and do cute things, talk with a cute voice and even fight in a cute way. The artwork on clothes and backgrounds is detailed and colorful and the battles look interesting with all those visual effects that combine cell phones, magic staves and … cooking pots. Eventually they are all messed up as well since you have a hard time even understanding what exactly they are doing or why they are even doing it but it still looks nice. Oh, and expect the usual erotic humor as well. There is not much of it but it’s there because they are supposed to be sexy moe girls.

FINAL THOUGHTS
Down to it, this is a bad show because of the horrible directing. The story is interesting, the visuals and the OST are quite well made, but the plot is scrambled, the characters are generic, and there is always Mahou Shoujo Lyrical Nanoha to put this show to shame with its own version of technological magic. Replay value is almost zero, enjoyment is low just because of the interesting concept. Not recommended.

This anime leaves you with a big, WTF. The first episode made no sense what so ever and then to make matters worse instead of spending the second episode explaining the first one they skipped back in time which was forward in time and the first episode had happened but it hadn't happened. (Confused yet? then your in the right place)

The story dragged on and then tried to make some sort of programming magic whcih would have been cool if it didn't break it's own rules every chance it got. And the magically appearing washing basin joke got old really quickly.

half way through as your just about to give up for unmerableness they finally explain what had happened in the first episode. whcih gave it a very "oh that all was just a dream" feel (that's not really what happened but it gave a very smiliar feel)

The sound track was neither painful nor memorable.The opening Theme song is kinda fun at the start.

Characters where bland, fit into SEVERAL stero types like it was their goal. The adult feamles suffered from Lets pretend this is an Eiichi anime big jiggley breast syndrome.

The anime was pretty, not ground breaking but the effects with the magic that didn't involve wash basins was pretty cool.

Overall, not a very memerable anime at all, fated to be lost in a mesh of meh animes.