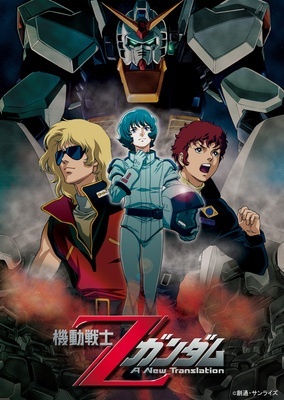 Mobile Suit Zeta Gundam: A New Translation - Heir to the Stars is the first of three movies that complie the Zeta Saga. This movie covers pretty much the first 15 episodes of the tv series more or less. There are changes to the story, that's why it's a new translation. But these changes are not drastic, at least not in this first movie. The story covers the Gryps Wars. We are introduced to Kamille Bidan and several other characters. We are also reintroduced to old faces from the One Year War.  The original tv series was released in 1985 and with this movie they inserted about 20 minutes of new animation. So there is a mesh of old and new animation. It's very obvious when something new is on the screen, but it flows well. It doesn't take anything aways from the story. The new animation is great. Even though the original animation is dated, I personally still like it, it holds well. Zeta Gundam is known for it's soundtrack. The introduction is different and performed by GACKT. I personally preferred the original intro music as retro as it would have sounded today. Lots of the soundtrack was intact in this movie.The tv series was exceptional, regarded as the best Gundam series by many. So compressing it into 3 movies could not have beeb an easy feat.

My only gripe with this first movie was the editing, especially at the beginning. I understand that only so much can fit into a 1 hour 40 minute movie, but the beginning is very choppy. The tv series is very dark. A lot of people die. Some of these deaths, even minor characters have impact on the story or to the main characters. With the editing some of these deaths didn't feel sentimental or poignant. That was lost unlike in the tv series. There was no trip to Colony 30, rather it was just shown on a lap top screen..this was a big scene because it showed the atrocities of the Titans. I think some of the editing also effected the music for it's emotional impact. Zeta Gundam had a very large and great cast of characters. Many very memorable, this is not lost with the main characters. The minor characters don't receive the development they had in the tv series, which is understanable. I recommend this to any Gundam fan. The changes may put off some die hard Zeta fans, but it's still a masterful compilation.