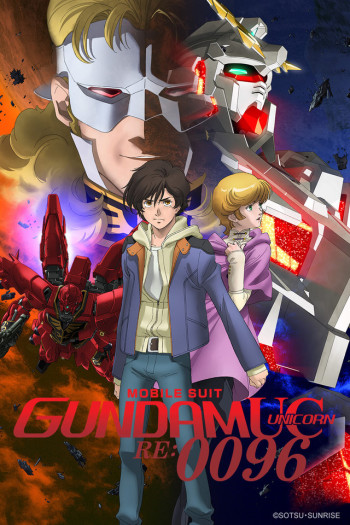 Mobile Suit Gundam Unicorn RE:0096 Episode 6 - Under the Mask

Removing his mask and revealing his face, Frontal requests the cooperation of Banagher, who can activate the Unicorn Gundam. When Banagher refuses, Angelo berates him for killing one of his subordinates. As Banagher struggles with the knowledge of his guilt, Marida takes him to shrine inside Palau. Meanwhile, the Nahel Argama prepares for an operation to recapture the Unicorn Gundam. Captain Otto is frustrated by his impossible orders from staff headquarters, but Daguza, the commander of the operation, asks him to also think of it as a mission to rescue Banagher. A Federation Forces spy notifies Banagher of the upcoming surprise attack, and he is appalled to learn that Palau will now become a battlefield. At the same time, Micott discovers that Riddhe, having gotten to know Mineva, plans to help her escape to Earth. Learning of Mineva's resolve, Micott lets them go.

They Called it Gundam

The Battle of Palau

Laplace, Where it All Began

From the Scorching Earth