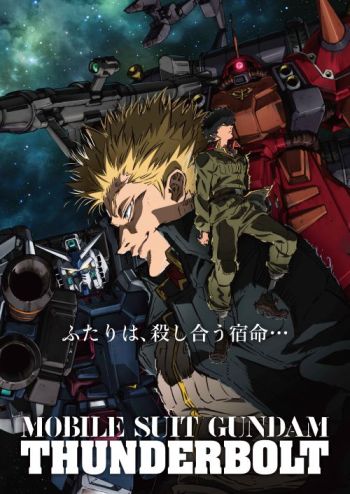 MSG Thunderbolt is as much as someone can expect from a 4 episode anime, whose episodes aren't longer than 15 minutes.

Going right from the first 2 minutes, that are full of movement and sets the ground vividly for what's about to come.

There's not much of a story to tell, there are two sides in a meaningles war between humans and everything collapses in beautifully animated mecha battle scenes.

It has a low amount of character, and you get to see pretty well their personalities. Short chats between them are very intensive in content about the little piece of universe they live in.

Short flashbacks about their past gives you a glimpse of how they ended up there and their intentiones and hopes are.

Music is awesome, with an OST perfectly matching every action and emotional scene. One of the main characters is allways followed by instrumental jazz and it works great.

Human emotions regarding war are way more realistic than in many other series. Deaths are more shocking, with some of them being from the dying person's point of view.

Conclusion: this show is a must watch, especially if you're into mature stuff and mechas or sci fi. I would only wish it would have had more than just 4 epic episodes.

Unlike traditional gundam series that mostly shy away from death by only showing explosions in the background or limited to certain characters this series showed in my opiionion as close as possible what a war with mobile suits would be like.

The fact that this is only 4 episodes long it gets its point accross easily and make you want the origanal UC gundam 0079 to be re-done in the same fashion by going into the turmoil of pilots and how each side is affected making you not want to pick a side.

Its a refreshing look at the gundam series and believe it is will worth the watch.